Next on The Scoop: Let’s Talk About Dog Lipstick — a.k.a. the Dog Penis
Dogster News 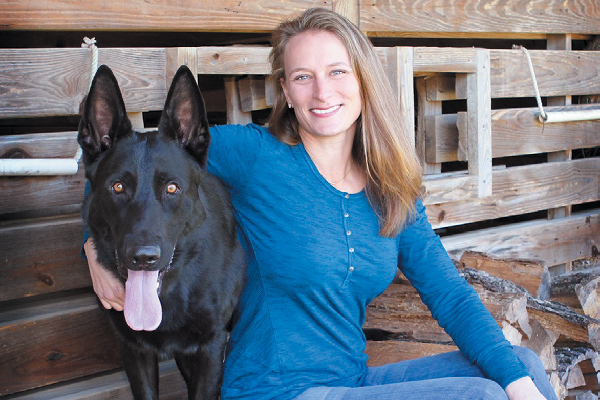 What does it take to be a search and rescue dog — and to own one? Autumn Manka weighs in on life with her K-9 Search and Rescue German Shepherd Dog, Kona.

Autumn Manka is a K-9 Search and Rescue (SAR) handler to her 3-year-old German Shepherd Dog, Kona. As members of the volunteer nonprofit Virginia Search & Rescue Dog Association (VSRDA), this dynamic duo spends its downtime training for and going out on searches to help Virginia law enforcement find missing people or human remains.

What it takes to be a K-9 SAR and handler The time and money required to be a K-9 SAR handler isn’t small. As Autumn explains it, the commitment takes over your life. Above and beyond training Kona and learning how to handle a search and rescue dog, Autumn herself must go through ongoing certifications including those in first aid, blood-borne pathogens and crime-scene preservation. She is, after all, working with the police in what could be an active crime scene.

Then there are the constant classes so she can make sure Kona and the other dogs on her team are taken care of. Doggie first aid, doggie agility, and doggie stretching and orthopedic classes all fill her calendar. Add an annual out-of-pocket cost of $2,000 to $6,000, and one wonders why anyone would do it. That’s an easy question for Autumn to answer. It’s the human paycheck.

“The feeling that you get, whether it was your dog or any dog, and you find a missing person that has been out for four days in the elements, and everyone is getting worried, and the dog hits the ground, starts the task and says, ‘Guys, he’s right here,’ and you’re able to get that person loaded into an ambulance and they are off and well because of a dog — that’s the paycheck. That’s the human paycheck.”

Nose up, nose down

For nose up work, dogs work off leash following their handler’s verbal control, looking for a smell of a person in the air. Photography courtesy Autumn Manka.

There are two main types of search and rescue dogs. Both require certification. There is tracking and trailing (known as “nose down” work) and wilderness area search and recovery (known as “nose up” work). Nose down work is scent specific. These dogs are looking for a specific person. They are trained to find a scent, lock on it and follow it. Nose down dogs go on missions wearing their leads so they don’t lose their handler. They have a job to do, and making sure their human is keeping up with them isn’t part of it. Once they lock on to that scent their heads are down, and they are going to follow it!

Nose up dogs are looking for a smell of a person or remains in the air. All of us have a specific scent that is determined by our diet, where we live, etc. That scent lives in our cells that we are constantly shedding. We can’t see it, but there is a cell cloud around us at all times. That cloud travels, much like fog. Even after a rainstorm, parts of your cell cloud can still be floating around in the air. Nose up dogs scan the sky sniffing for that scent. They usually work off leash, and their movements are more methodical —you can see their brains working as they scan, pause, sniff and scan again. They too will follow the scent no matter what, but head up dogs are trained to stay under their handler’s verbal control.

Autumn has been doing this volunteer work since 2007, and Kona isn’t her first SAR K-9. When it was time to get another partner, Autumn knew what she wanted. Although any worker breed can be trained in SAR, she works well with German Shepherd Dogs. She contacted a breeder who specifically breeds the type of pup she was looking for. Before even meeting the puppies, Autumn studied their pictures.

When she saw a group photo there was one pup out in front, a born leader. When she met them in person, a train went by close enough to scare the newborns. The puppies hid, all but one. He too was most likely afraid, but he wasn’t going to show it. He stood his ground, facing the train. This was the brave leader Autumn knew she could train into a talented search and rescue dog.

Kona came home at 7 weeks and immediately went into training. Of course, obedience is a big part of SAR dog training, but the majority of what is focused on at this age is structured play and purposeful socialization. Once a puppy gains the physical maturity to start his search-and-rescue training it will take 14 to 24 months of 8 hour sessions per week to get to a place where the dog can pass certification.

Kona is a recovery, nose up dog, which means that Autumn can’t share the specifics of their cases, but he has had success in his searches. They search for missing people. As examples, it could be a dementia patient who is lost, someone who has wandered away from a car wreck or someone involved in a crime.

Hunting, for the dog, is fun. You don’t really train a talented dog partner to hunt, according to Autumn. That part comes naturally. You train him to indicate and show you that he has found the person or remains he has been looking for. The hunting — that’s part of who the dog is.

“They are doing what they love to do,” Autumn says. “It’s a beautiful thing to watch. To watch your dog utilize all their dogginess and succeed is an awesome feeling.”

Why do Autumn and Kona do this?

Back to the original question of why. Why would someone spend so much time and effort to volunteer for something like this?

For Kona: Well, as a reward for a job well-done, he gets his favorite toy and there is nothing he likes more than his favorite toy. Not to mention he is getting to do what all of our dogs love — sniff!

For Autumn: According to her, she’s now a connoisseur of good boots, wool clothing and is a sock snob. She can use a compass, GPS and a radio forward and backward — nothing of which she knew anything about before becoming an SAR K-9 handler. Oh — and then there is that human paycheck!

A: Kona eats a dry beef and sweet potato kibble with warm water added twice a day. He also earns treats when we train obedience. Sadly, for Kona, the days we train with treats, he gets less kibble. Have you ever seen an overweight working dog?

Q: Does Kona get any human food?

Q: What type of gear does Kona use?

A: Many SAR dogs wear lightweight harnesses or vests. Some wear only collars. Whichever the handler chooses, the gear is usually minimal in Virginia, because the dogs are searching in brambles and bushes, which loose gear gets hooked on. Also, our dogs mostly search off leash day and night, so a bell and LED lights are important.

Q: Are there certain health issues that Kona’s job causes you to have, and how do you address those?

A: SAR dogs are K-9 athletes, and as such, they are exposed to a lot of impact on their joints. Many of our SAR team dogs use joint supplements throughout their working career. I think blood sugar is an important consideration, and I prefer to feed Kona several meals throughout the day, instead of one big meal. When a K-9 teams searches for hours, it’s common for handlers to throw some kibble in their partner’s water to keep their energy up and encourage water intake. On the East Coast, ticks are a big concern for handlers and dogs. I treat my search gear with Permethrin sprays every six to eight weeks, and Kona wears a tick collar.

Q: Do you groom Kona yourself or take him to someone to be groomed?

A: I do all the grooming care for Kona. Also, while (I assume) Kona does not daydream about getting his nails trimmed, he drools when he sees the grinder. Working together, my spouse and I intentionally classically conditioned him to the nail grinder. Nails are a safety issue for a working dog, and a paw injury can take a canine out of deployable status for weeks or months if it keeps reopening or
gets infected.

Wendy Newell is a former VP of Sales turned dog sitter, which keeps her busy being a dog chauffeur, picking up poop and sacrificing her bed. Wendy and her dog, Riggins, take their always-changing pack of pups on adventures throughout the Los Angeles area. Learn more about them on Facebook at The Active Pack and on Instagram @wnewell.

One comment on “Autumn & Kona: A K-9 Search and Rescue Team”