Next on The Scoop: Ask Frank: Why Does My Human Keep Dropping His Ball?
Training

Why You Should NOT Talk to Your Dog Today

Does your dog do the opposite of what you ask or completely tune you out? Try using only body language for a day to begin communicating better.

Dog whispering is not what you think it is. It’s much more subtle and much deeper than you can ever imagine.

Don’t audibly talk to your dog for an entire day. Instead, speak only through body language (whispering) and see what happens. I predict you’ll not only discover just how much you chatter meaningless words to your dog, but you’ll also begin to understand why she often does the opposite of what you ask or just completely tunes you out. Your dog will start to pay closer attention because she’ll have to rely on your body language (her first language), and you, in turn, will pay closer attention to what she is trying to say in return.

Why have I asked you to do this exercise? Because if you aren’t aware of your own body language and energy around dogs, you will have very little success in training your dog. Remember: She responds to your body language first, secondarily to the words coming out of your mouth.

This cartoon says it all 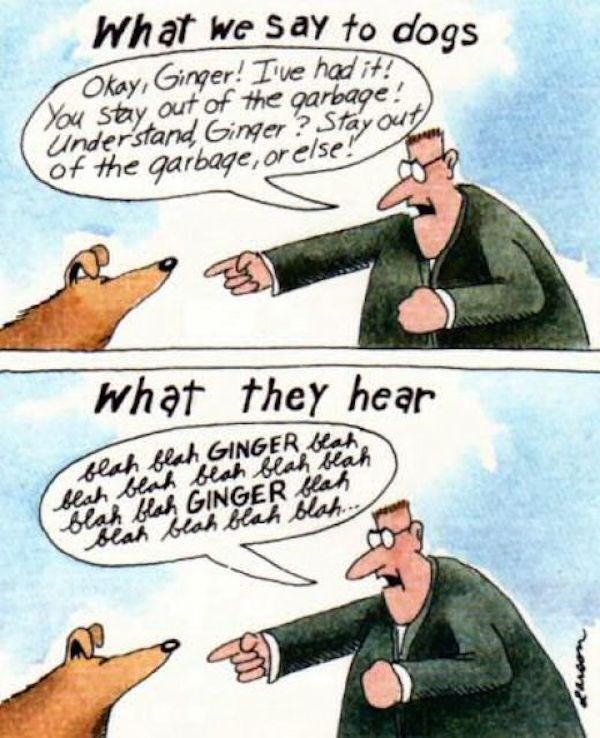 What we say and what dogs hear. (Cartoon by Gary Larson)

I love this cartoon because it brilliantly illustrates how we relate to dogs. They are an entirely different species, yet we relate to them as if they are human. This is why trainers have jobs and people get bitten, and why dogs don’t pay attention, are destructive, play chase when you are calling them to you… the list goes on. There is often a total disconnect between dogs and humans.

Let’s dissect the cartoon. Our friend with the glasses is clearly in a reactive state: pointing fingers, yelling, bending over/leaning forward, sending out big, angry energy. The dog is trying to figure out what this man is saying. Is this he calmly listening to his human, letting it blow over his head and tuning him out? No, this dog is reading angry reactive behavior only, the words are meaningless.

The dog’s body language in the cartoon above, says, “I’m stressed.” Look at the direct eye contact, alert and forward ears, closed mouth — by no means is he calm and relaxed. If the dog did something offensive to his human, like not come when called or steal a sock, and got this reaction, don’t you think the dog may not want to ever come when called? Would the dog try to change his human’s tone and get a game of chase going with the sock? Dogs do things to engage us, but if we don’t understand how we are talking to them through our body language, or how to read their body language in return, we will not be able to have a healthy relationship.

If you can’t not talk to your dog for a whole day, try using only body language for two hours. If you find yourself in his face, trying to get his attention, then he has learned to tune you out.

When using body language instead of speech, pay attention to these things:

Keeping all of the above in mind, think about what you were saying to your dog through body language and what he was trying to convey in return. Here’s an example to further illustrate my point:

Diamond wants to play fetch, except he brought a shoe instead of a dog toy. To him, it’s something to fetch, play chase with, or use in a good game of tug-o-war, but his guardian doesn’t agree. The body language of his person is angry, and this is very confusing to Diamond. 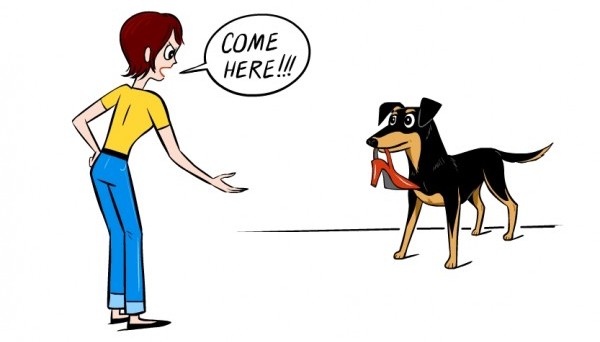 .Instead of getting angry when your dog grabs a shoe instead of a toy, understand that he just wants to play, not be destructive with the shoe. A more appropriate behavior would be for you to relax, while redirecting him to one of his toys. No confusion there, but instead learning without anxiety from either party.

Dog whispering is simply becoming aware of and learning how to read each other’s body language. Relying more on your body language should prompt an awarenesses of how you are relating to your dog. This awareness could deepen the connection you have because you are now actually speaking in a language she can understand while learning to read your dog. It’s not magic — it’s awareness and understanding.

Once you’ve become more aware of your energy and body language, try this: As you begin to speak to your dog, whisper. Literally, whisper the cues/commands in sentences, rather than single cues, using hand signals. See how much more attentive your dog will be to you.