Next on The Scoop: Tito’s Handmade Vodka and Dog Rescue Make a Great Mix
Health & Care

Diabetic dogs can live happy and healthy lives, but you may need to do additional research when learning how to manage their care.

According to the American Veterinary Medical Association, diabetes affects approximately one in every 500 dogs. Chuck, my senior Pug mix, was diagnosed with the disease shortly after I adopted him. He was 10 years old and severely overweight when he came from the shelter. Although I did get his weight down by 25 percent thanks to a lot of walks, all that extra heft undoubtedly contributed to the onset of his disease. (Please don’t let your dogs get fat, it’s so dangerous to their health!)

When your dog is diagnosed with diabetes, there is a ton of information to learn. Yet, there are quite a few things you may just take at face value without even thinking to question. Trust me, don’t do that. Always be inquisitive. Here is what I learned by managing Chuck’s diabetes. 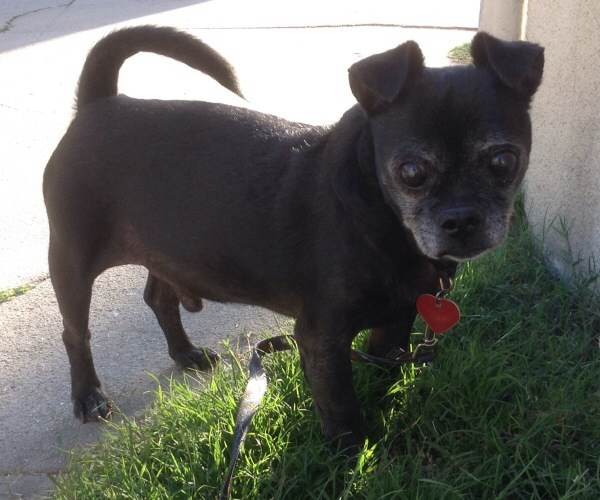 Chuck was 10 when diagnosed and is 12 years old now. (Photo by Amber Avines)

1. There are different types of insulin

When Chuck got his first insulin prescription, it was for Humulin N. I went to Costco and paid $130 for a bottle that would last a month. Over the next few days, I did some research and discovered Chuck could be moved to Novolin N (a different type of insulin). This is an equally expensive drug, but I finally found it for $24.88 at my local Walmart. Never underestimate the value of shopping around. Pharmacies frequently have contracts with certain drug companies that affect which drugs they sell and how much they cost.

When your dog is diagnosed, invest the time into exploring your medication options. When asked, Chuck’s vet didn’t even know there were two insulins (she just jotted down the one she knew about), and it took some independent research on my part to determine Chuck could be safely moved from one to the other (not all animals can or should, so be careful and only do it with medical supervision).

2. You can do blood glucose curves at home

When the vet prescribes your dog’s initial dose of insulin, she is making an educated guess. Just like with human meds, some adjustments may be required along the way. This is where a blood glucose curve comes in. A BG curve usually takes place over the course of 12 hours, with blood being drawn every two hours. A special meter is used to calculate your dog’s blood sugar, and this helps determine if your dog is receiving the proper dose of insulin.

When a blood curve is done at your vet’s office, it will typically cost somewhere between $120 and $150. Since your vet clinic is probably not open for 12 hours, chances are they’ll do an eight-hour curve instead. Your vet will require several blood curves at the beginning to adjust the insulin dosage until your dog’s blood sugar is regulated (this is when the blood sugar levels are where they should be).

Chuck had his first curve at the clinic, but his numbers were all over the place. After a consult with the vet, I learned that stress is a major factor when it comes to the results. She said to come back next week, but I doubted Chuck would be any less stressed. 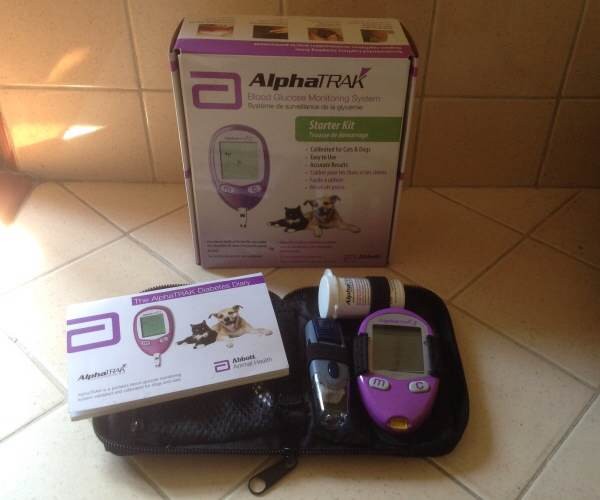 My AlphaTrak 2 monitoring kit allows us to do blood curves at home, where Chuck is relaxed and stress-free. (Photo by Amber Avines)

Here’s what your vet may not tell you (I know mine didn’t). You can do blood curves at home, which will produce more accurate results and save you a ton of money.

I called the clinic and asked what meter they used to do the curves and was told AlphaTrak 2. So, I went to Amazon and bought AlphaTrak 2’s complete blood glucose monitoring kit, which includes the meter and all the supplies (it currently sells for around $57). I read the instructions and did a 12-hour test while Chuck hung out in the comfort of his own home.

When I gave the results to my vet, she immediately discounted them. She said there are bad pet meters out there and my results were probably inaccurate. When I told her I purchased the exact same equipment they use in their clinic, she changed her tone and logged my results onto his chart.

A savings of $400 and more accurate results. Score one for Team Chuck!

3. Your vet may lack the knowledge to properly care for your diabetic dog

Did you know that a diabetic dog can lose his sight overnight? Yes, literally overnight. I had no idea; my vet didn’t tell me. 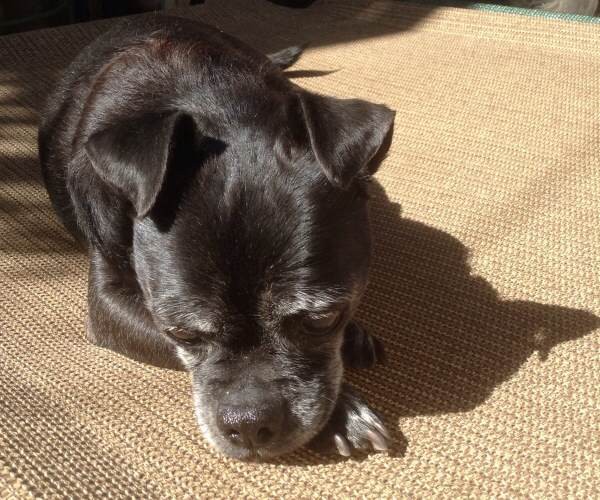 When Chuck isn’t hanging out at the dog park or going for walks, he loves to sunbathe on the patio. (Photo by Amber Avines)

One day Chuck and I were enjoying our usual walk in the neighborhood, and the very next day he was bumping into telephone poles and falling off curbs. He couldn’t see.

I rushed him to a 24-hour emergency clinic, not realizing the sight loss had anything to do with the diabetes, and the vet discovered that his blood sugar was dangerously low. It was then that I realized Chuck needed more specialized care than his vet could provide. The next morning I made appointments with two specialists, an internal medicine doctor and an ophthalmologist.

Sadly, the eye doctor confirmed that Chuck had lost most of his vision. In fact, diabetic dogs can go to sleep fully sighted and wake up blind. It may not always happen that fast, but it can.

“The one complication of diabetes in dogs that cannot be prevented is diabetic cataracts,” says Dr. Linda Fleeman, a veterinarian at the Animal Diabetes Australia clinic. “Unfortunately, owners must prepare for the likely possibility of blindness due to cataract formation. However, vision can usually be restored through surgical removal of the cataracts.”

Fortunately, I got better news from the the internal medicine specialist.

Since Chuck’s blood sugar levels were generally high, my primary vet had been increasing his insulin, going from three units up to six over the course of a few months. However, the specialist said too much insulin can produce wild swings, and that’s why Chuck’s blood sugar level was so low at the emergency clinic. She said instead of managing Chuck’s high numbers with higher insulin doses, it was safer for him to have steady numbers. She dropped him down to four units, and he’s been in a good place ever since. I believe she saved Chuck’s life that day. 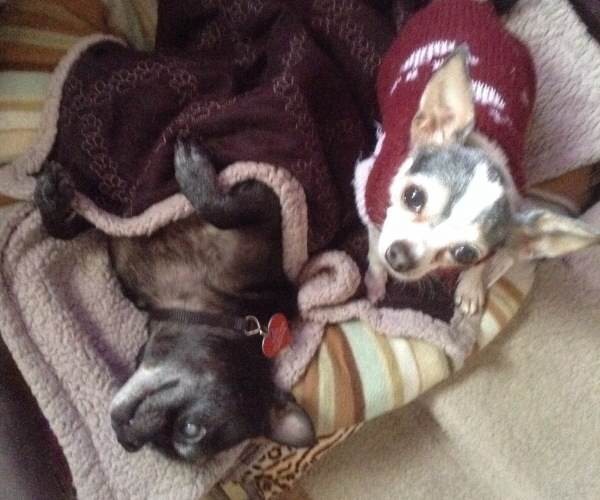 Following an afternoon of play, Chuck enjoys a cat nap with his pal Bruno. (Photo by Amber Avines)

“Many general practitioners may not frequently treat diabetic patients, and may feel overwhelmed when things do not go to plan,” says Dr. Sarah Pierard, also of the Animal Diabetes Australia clinic. “For the most part in general practice, the focus tends to be on achieving a perfect blood glucose measurement. However, the goal of diabetes treatment is to control the signs of diabetes (e.g. excessive thirst and urination, and weight loss despite a good appetite) and to avoid low blood sugar (known as hypoglycemia) due to insulin overdose. The focus should be on the day-to-day clinical signs of the patient, not on a perfect blood glucose reading.”

Diabetes is not a death sentence, but if it’s not treated properly it can be. Diabetic dogs can live normal, happy lives, but they depend on you to properly manage their ongoing care.

Don’t sit in the backseat when it comes to your pet’s well-being. Even if you have a vet you trust, ask questions. Too many people worry about offending their vet by second guessing what they say or by asking for a referral to a specialist, but always remember you are your dog’s best advocate for his continued health and happiness.