Next on The Scoop: Why Do Dogs Stink When Wet? 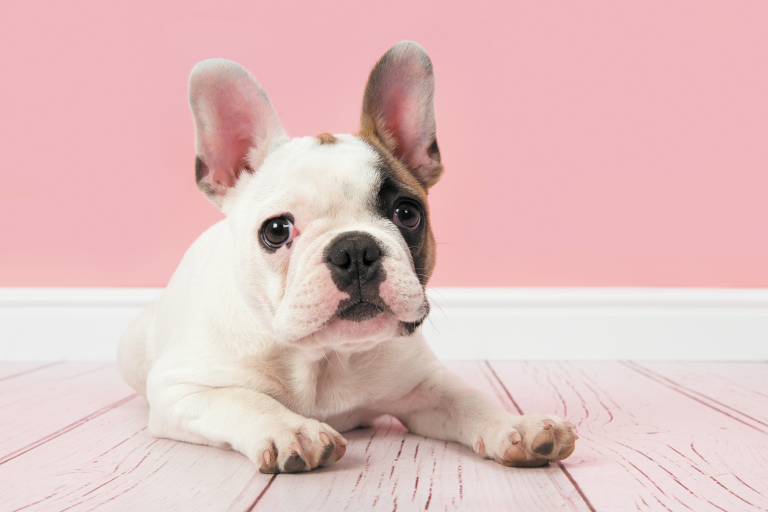 French Bulldogs may look tough on the outside, but inside they are lovably soft, caring and easygoing. These dogs spread good vibes wherever they go.

Strong and stout, the French Bulldog captivates his family with animated playtimes, fanciful frolics and, yes, bountiful snuffles, too. A relatively easy keeper, the Frenchie has small exercise and grooming requirements, but big companionship needs. This isn’t the breed for people looking for a dog with all-day energy or a protective attitude (Frenchies likely sleep through doorbells), but the breed makes a charming, low-maintenance family friend.

“ If in doubt, try chillin’ out! ” Photo: gollykim | Getty Images

The English Bulldog provided the breeding foundation for today’s Frenchie. Over time, some British breeders developed smaller, lighter Bulldogs with an extra dose of vivacity. When English lace makers moved to France, they took their popular, lighter Bulldogs with them. These Frenchie forefathers became the darlings of ordinary Frenchmen, including Parisian streetwalkers. Americans visiting France became enamored with the breed, too, and introduced the dogs to the states. Especially fond of the bat-ear style, Americans wrote the breed standard to include bat-style ears. These days, Frenchies are the fourth most popular breed in America.

Teaching a Frenchie takes patience; they’re agreeable but stubborn. Training a Frenchie in obedience takes determination as well as a sense of humor. Frenchies want to please their owners, but they also want to please themselves. If the two interests don’t coincide, Frenchies may choose to suit themselves! If you’ll be humiliated if your dog dozes off in class, you should rethink Frenchie ownership.

Although Frenchies appreciate walks and playtimes, they don’t tolerate strenuous exercise. Frenchies are brachycephalic: Their short faces make breathing less efficient than longer-muzzled dogs. They’ll have trouble cooling themselves off in hot weather and after vigorous workouts.

Car travel with the easygoing Frenchie is usually stress-free, as long as he’s kept cool. For airline travel, keep in mind that some airlines have concerns flying brachycephalic breeds in cargo. Short-nosed breeds are especially vulnerable to air quality and temperature changes.

Frenchies usually get along well with other animals and treat strangers amiably. A relatively quiet breed, few Frenchies bother to bark at newcomers. Instead, they’re inclined to greet them with slobbers and kisses. Their families won’t hear much barking, but they’ll certainly hear snorting and snoring galore.