Next on The Scoop: Can This Interactive Vest Expand the Uses of Service Dogs Even Further?

Does your dog freeze when you put him in a slicker? Scientist Alexandra Horowitz offers a reason why.

If you knew our little Italian Greyhuahua/Jack Russell named Rocky, you’d know that getting him to do his business in the rain is a challenge. You see, our precious little Rocky is … shall we say … a diva. Perhaps even a mega-diva. We’re talking Celine Dion/Cher/Mariah Carey-level diva. Only worse.

And like any true diva dog, going outside in the rain is simply not an option. Must be about getting his fur wet, my wife Susan and I determined after his first handful of sit-in strikes. So, naturally, we did what any parent would do: We got him a raincoat. And we did what any parent buying a doggie raincoat would do: We got him a cute yellow one with a green frog positioned by the butt. Awwwww. 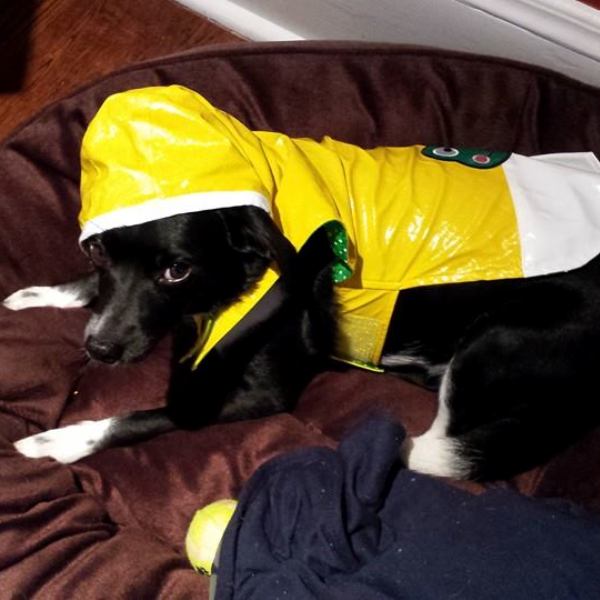 Alas, it only seemed to make matters worse. He HATED it. He resisted us putting it over his head, and not only would he not go to the door, he wouldn’t even get up out of his bed, where he always ran to when he saw us get the coat off the shelf.

Paws extended, butt low, Rocky was not budging without a court order.

Natutally, as puppy parents, we assumed his disagreement was rooted in the cramping of his style. Imagine the hit his street-cred would take if other dogs saw him traipsing down the sidewalk in this getup? 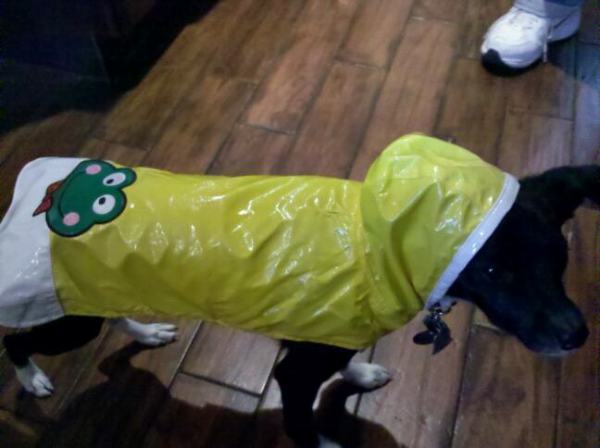 But perhaps there was another reason. Perhaps, by draping him in well-intentioned water-resistant fabric, we were actually tapping into a deeper psychological condition?

Apparently so, says cognitive scientist Alexandra Horowitz and author of Inside of a Dog: What Dogs See, Smell, and Know. According to Horowitz, placing a raincoat on a dog, while seeming to be logical by human standards, is actually sending a very different message to the dog. Instead of conveying relief from wet fur, the placing of the coat on the dog is interpreted as showing dominance.

“The natural behavior of related, wild canines proves the most informative about what the dog might think about a raincoat. Both dogs and wolves have, clearly, their own coats permanently affixed. One coat is enough: when it rains, wolves may seek shelter, but they do not cover themselves with natural materials. That does not argue for the need for or interest in raincoats. And besides being a jacket, the raincoat is also one distinctive thing: a close, even pressing, covering of the back, chest, and sometimes the head. There are occasions when wolves get pressed upon the back or head: it is when they are being dominated by another wolf, or scolded by an older wolf or relative. Dominants often pin subordinates down by the snout. This is called muzzle biting, and accounts, perhaps, for why muzzled dogs sometimes seem preternaturally subdued. And a dog who ‘stands over’ another dog is being dominant.

“The subordinate dog in that arrangement would feel the pressure of the dominant animal on his body. The raincoat might well reproduce that feeling. So the principal experience of wearing a coat is not the experience of feeling protected from wetness; rather, the coat produces the discomfiting feeling that someone higher ranking than you is nearby.

“This interpretation is borne out by most dogs’ behavior when getting put into a raincoat: they may freeze in place as they are ‘dominated.’ … The be-jacketed dog may cooperate in going out, but not because he has shown he likes the coat; it is because he has been subdued. And he will wind up being less wet, but it is we who care about the planning for that, not the dog. The way around this kind of misstep is to replace our anthropomorphizing instinct with a behavior-reading instinct. In most cases, this is simple: we must ask the dog what he wants. You need only know how to translate his answer.”

So good news, Rocky. We’ve ditched the raincoat. Can we get you a treat? After we fluff your pillows? Good boy!

One comment on “A Scientist Explains Why Dogs Dislike Raincoats”