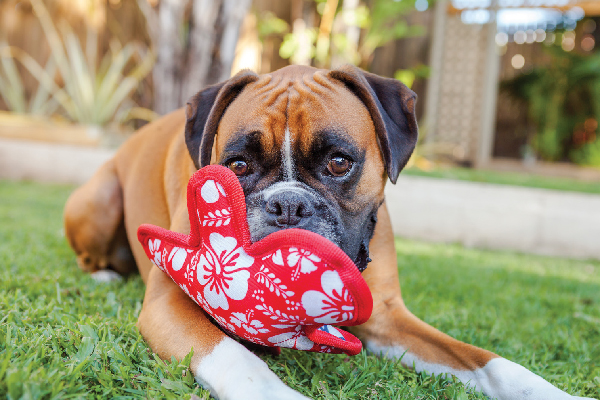 Boxers may look tough as nails (and they are certainly tough) but under the surface they are lovable, playful, sometimes goofy pals.

The Look of a Boxer

Boxers have a compact, square-built frame that looks equally elegant and powerful. Their lean, well-developed muscles are usually visible under the tight, unwrinkled skin, and they carry themselves in a proud and balanced manner. They have chiseled heads—in proportion to their bodies—with open nostrils and wide, blunt muzzles. They have strong necks, short backs, docked tails and straight front legs. Their taut, close-fitting coats can come in a variety of colors: beige, tawny brown, and shades of red with white markings.

Close up of a Boxer with his tongue out. Photo: Charlotte Reeves Photography.

Boxers may look tough as nails (and they are certainly tough) but under the surface they are lovable, playful, sometimes goofy pals. They get along with the whole family, including children and other pets. Some have even been know to get chummy with cats.

Though it’s a myth that Boxers got their name from their tendency to stand up and “box” with their paws, they do use their paws frequently, whether to bat playfully at their water bowls, toys and friends. They sometimes do it for fun, but mostly it’s to send you a message like “feed me” or “play with me!” Boxers also love to carry things around the house. This could be a toy, a shirt, or just about anything.

Loyal and affectionate, Boxers need lots of attention. Playtime, walks and obedience games are always appreciated. They are extremely protective of their surroundings, serving as very dependable guard dogs. However, they are generally friendly—and sometimes giddy—when meeting new people. An excellent companion to kids, they might be too rambunctious with the very young—but they never lose their patience or good nature.

Boxers sometimes try to dominate their owners. The best way to handle this is to maintain a firm but friendly hand. If acquired as a puppy, make sure your Boxer gets adequate training and socialization to manage the extreme aspects of his energetic personality. An untrained Boxer—using its speed, energy and jumping skills at will—can be a handful.

Boxers are sensitive to heat and cold. Their short snouts make it hard for them to cool themselves down in humid weather, and their coats are not thick enough for the cold. If you live in an extreme temperature area, either consider another breed or closely monitor your Boxer when playing outside.

A healthy Boxer can live as long as 14 years. Common health problems include tumors (especially in older Boxers), skin allergies, hip dysplasia and heart problems. They also tend to drool and snore. Like most energetic canines, they need loads of exercise, activity and human contact to maintain good health and happiness.

Developed in 19th century Germany from German Mastiffs and English Bulldogs, the Boxer was used as a hunting, fighting and working dog, prized for its tenacity, strength and obedience. Later used as cattle dogs, they also made a name for themselves as circus performers. In the early 1900s, the Deutscher Boxer Club established a breed standard for Boxers, and the AKC approved them in 1904. Decades later, American soldiers brought them home after World War II, and they quickly became popular in the U.S.