Next on The Scoop: 5 Ways to Shop Online and Help Dogs at the Same Time

Ivan the dog was called in to locate a missing gun in Massachusetts. He found it. And he shot it.

A Massachusetts police dog named Ivan shot a gun this week, bringing the total number of dogs who’ve shot guns in the past few weeks to two. (You will remember Dale Lanier’s dog, riding shotgun in a truck, recently shooting his owner with a 9mm in Florida.)

As for Ivan, he shot a gun when he was sent looking for one in a snowbank, according to KSN.com. It was put there by three criminals. Earlier that night, an officer on patrol heard three gunshots, went to investigate, and saw a car speed away from the scene. The car stopped, and then a man jumped out and buried something in the snow.

The officer quickly caught the men, then called for backup to search the area. Backup came in the form of Ivan, a German Shepherd police dog. His handler, Lt. John Pickles, ordered Ivan to search the area after a shell casing was found in the car.

Ivan started pawing through a snowbank. When he was digging, his paw hit the trigger of a loaded Ruger semiautomatic. Ivan shot the gun.

“I definitely thought for sure my dog just got shot,” said Pickles, who works with the Essex County Sheriff’s Department. It sounded “like a loud firecracker. I never even saw the gun. I was walking up on my dog, and I was probably only two to three feet behind my dog when it happened.”

“I surmise that the snow was there for a week, and it was probably like ice,” Lawrence Police Chief John Romero told CNN. “The individual probably was not able to bury it very deep, and he had no time.”

Everyone is okay. They couldn’t figure out where the bullet went, but police went around to houses and woke everyone up and asked whether anybody had been shot by the dog. 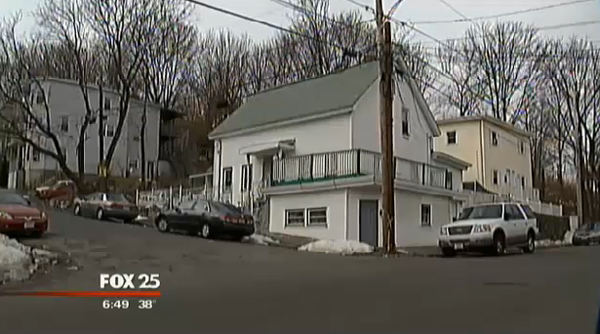 The three criminals were arrested and charged with possession of a firearm, possession of ammunition, receiving a firearm with a defaced serial number, and receiving stolen property, according to Chief Romero.

“This is a first. I’ve never seen anything like this — and we can laugh at it now because no one was injured, including the dog Ivan — but I’ve never seen it before,” said Romero.

“The dog’s supposed to just lie down or sit when he finds the article,” said Pickles. “I think it’s just because it was buried in the snow. A one in a million chance there.”