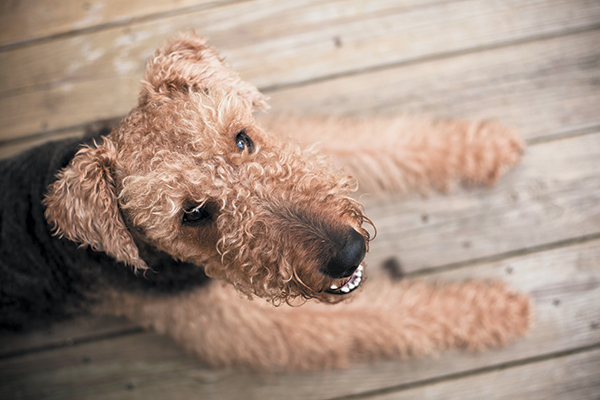 The Airedale terrier is an independent, problem-solving breed.

President Teddy Roosevelt once declared that the Airedale Terrier “can do anything any other dog can do, then lick the other dog if he has to.” The president certainly appreciated the exceptional versatility of the Airedale. The King of Terriers is an earnest, occasionally clownish, independent problem-solver with an enormous heart for family.

The Airedale has Valley of Aire origins

Developed in England’s valley of Aire, the Airedale was developed by common folks. Farmers needed a multipurpose working dog that could control vermin, guard the home and bring food to the table. Early Airedales killed badgers, water rats and otters, hunted small game, kept track of livestock and protected homes.

Hunters (and more than a few poachers!) used them as bird finders and retrievers, too. The Airedale’s speed, stamina and imperviousness to rough conditions equipped him for his diverse tasks. But despite his hardiness, he was bred gentle enough to live alongside family.

Not surprisingly, given his courage and athleticism, the breed was also among the first British police dogs. In the early 20th century, Col. Edwin Richardson trained Airedales (as well as Collies) to perform military tasks such as searching for the wounded and carrying messages in tins. Richardson established the first British War Dogs Training School at Shoeburyness, Essex.

In World War I and World War II, Richardson’s robust and resilient Airedales were renowned for getting their jobs done, even when severely wounded.

Fitting the Airedale into the family

The Airedale terrier may be hardheaded about obedience because of his independent character. Photography ©WilleeCole | Getty Images.

Although strong and serious about work, many Airedales have a silly side and relish entertaining the household with their antics. At work and at play, their commitment to family is well-celebrated. Generally sensible, the Airedale is characteristically a levelheaded watch dog. He’ll announce newcomers, but his watchfulness transforms to sociability once guests are welcomed inside.

Around other dogs, Airedales typically are selective about friendships. They may be aloof or watchful with new dogs, and they certainly tend to chase the family’s cats.

With the breed’s physical and mental versatility, he can excel in any type of dog event: conformation, rally, agility, tracking and barn hunts (Yes, he’s a terrier!). But also because he’s a characteristic terrier with an independent streak, the Airedale may be hardheaded about obedience.

In fact, he’ll often review his owner’s requests and then make his own decisions. Because we developed the breed for resolve and perseverance and rewarded his self-directed problem-solving, we can’t exactly criticize him for independent thought!