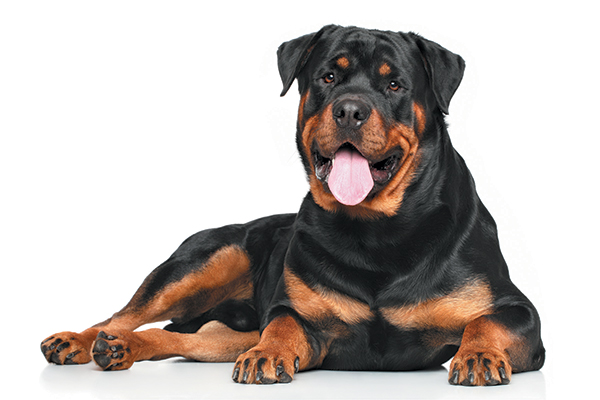 Rottweilers are tough, strong dogs. Their unflappable self-confidence and intelligence can result in a loving, devoted companion.

The Look of a Rottweiler

Rottweilers have medium-sized, rugged, powerful builds with dense, straight and glossy coats. They have broad heads with rounded skulls and straight, well-developed muzzles. Their dark, almond-shaped eyes have a friendly and devoted look, and their triangular ears hang forward. They have strong necks and firm backs and (normally) docked tails. Their coats usually come in black with rusty patches. Overall, Rottweilers have a look that suggests courage, agility and strength.

Rottweilers are tough, strong dogs. And they know their own strength. Their unflappable self-confidence and intelligence—when properly trained and socialized—can result in a loving, devoted and sometimes laid-back companion.

Extremely energetic, Rottweilers love playing catch in the back yard, tagging along for a morning run or taking a big hike in the woods. They crave attention and companionship from their owners. Without it, they tend to get bored and destructive. A neglected or mistreated Rottweiler can do a terrible number on your favorite shoes.

A happy and properly trained Rottweiler can be a devoted friend to children, not to mention an extremely effective watchdog—often having to do nothing more than stand there to keep trespassers away.

Before you consider a Rottweiler, be prepared for its massive size and challenging temperament. Rottweilers appreciate a confident handler who can show them who’s in charge. Some may test your authority, so stay on top of their training and obedience. They respond to commands and are eager to please.

Coming from a long line of herders, Rottweilers also appreciate stimulating tasks and activities. Keep them busy with agility and obedience games. But remember to always keep them on a leash in public, as they can be slightly confrontational with other dogs.

A healthy Rottweiler can live as long as 12 years. Common health issues include hip dysplasia and eye problems. Their coats are easy to care for and don’t shed excessively.

Most likely descended from the sturdy, powerful, Mastiff-like drover dogs of ancient Rome, Rottweilers were named after the German cattle town of Rottweil, where these dogs managed herds for hundreds of years. In the mid-19th century, cattle driving became outlawed in the area, making the Rottweiler somewhat redundant. However, in the early 1900s they suddenly became popular police dogs and by 1924 the German Rottweiler Club was formed. Today they serve time as both working dogs and beloved companions.