Next on The Scoop: 10 Tips for Celebrating Mardi Gras With Your Dog
Health & Care

Can Dogs Get STDs?

There are three major STDs that affect dogs: one bacterial, one viral, and one transmissible form of cancer. Each is most frequently found among intact strays, feral, or wild dogs.

Dogs can get, carry, and pass on canine venereal diseases. The important word in that sentence is “canine.” Canine STDs can be spread between dogs when they have sexual intercourse with each other, but their most devastating impact is overwhelmingly on puppies born to infected mothers.

The three major sexually transmitted diseases that affect dogs are:

All three are extremely rare in spayed or neutered domestic dogs, which is an additional inducement to have dogs fixed at the earliest opportunity. The largest at-risk populations for any of these are intact stray, wild, or feral dogs, though dog breeders are advised to have their dogs screened every year. 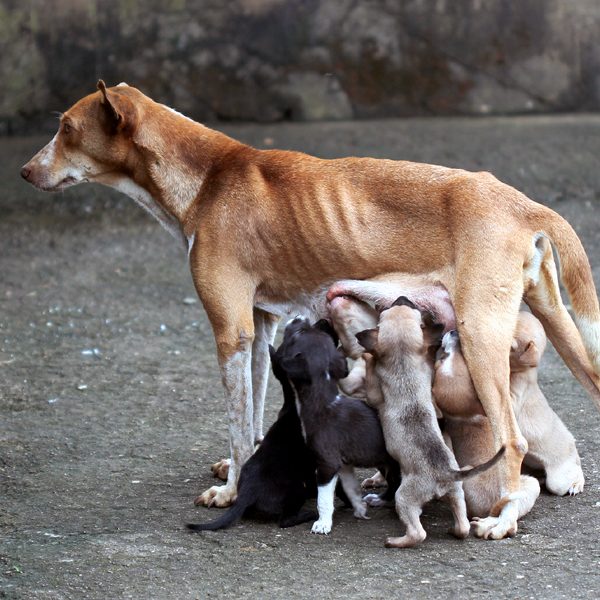 Two of the three dog STDs are deadliest to newborn puppies. (Photo via Pixabay)

The first is caused by a bacteria, the second by a virus, and the last is a transmissible cancerous tumor. Let’s look more closely at each, with a brief overview at the infectious agent itself, how it is spread, and what symptoms manifest in each case.

Though Brucellosis is the most common STD in the animal kingdom at large, it is the least common of the three major canine diseases in dogs themselves. A bacterial infectious disease, it is caused by the Brucella canis bacterium. The most at-risk dogs are intact strays, dogs with no access to regular veterinary care or spay/neuter procedures. This means it is hugely unlikely to affect any domestic pet. Should it occur in a pet, it is manageable, but incurable. 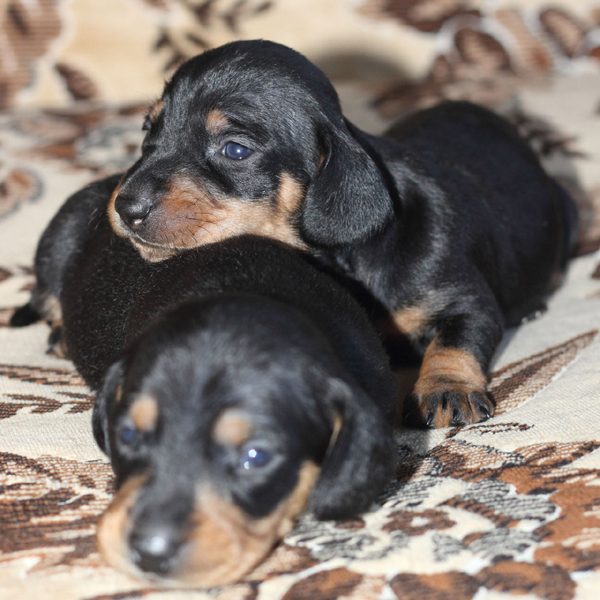 Getting your dog fixed can stem the spread of these illnesses. (Photo via Publicdomainpictures)

When a female dog carries the disease, Brucellosis can be difficult and time-consuming to diagnose. Symptoms tend to show up not in the dog herself, but in her repeated late-term failed pregnancies or in consistently unhealthy litters. Symptoms are more pronounced for intact males, whose testicles may swell before ultimately becoming noticeably shriveled.

Of the three canine STDs, only Brucellosis is zoonotic, meaning it can be spread from dog to human. The CDC says that Brucellosis in humans usually happens from exposure to unpasteurized dairy, and that the chance of human-to-dog transmission is rare. It can happen, though, in those rare instances when people who have regular contact with pregnant dogs — specifically vets, veterinary assistants, or dog breeders — handle or come into physical contact with infected bodily fluids or tissues after pregnant dogs give birth. Even then, they’d have not only to be not wearing proper protective gear but also be immunocompromised themselves.

The dog variety of the herpes virus, also called CHV, might be the most widespread of all dog STDs. PetMD estimates that up to 70 per cent of all dogs may carry the virus, though the majority of that number have it in a latent or dormant form. As with Brucellosis, though, symptomatic dogs are intact, but mostly wild or feral. Still, infections in sexually active dogs mean that breeding populations are still at some risk. Also known as “fading puppy syndrome,” its effects are most pronounced and fatal in puppies from birth to four weeks of age, who can contract the viral infection in the womb or shortly after birth. 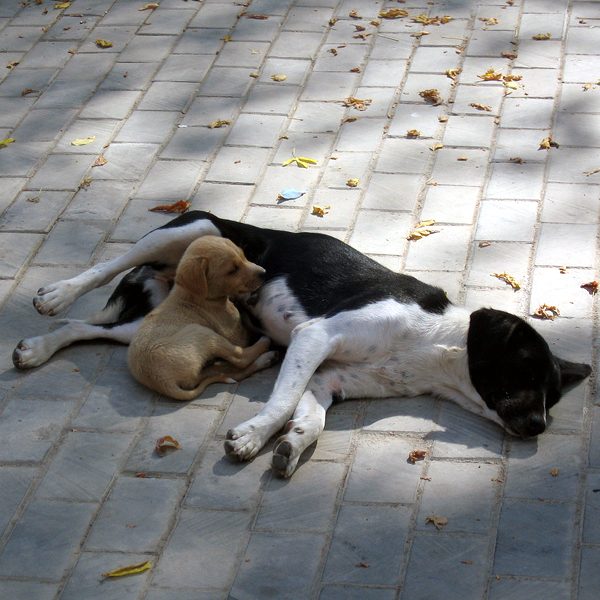 Puppies who contract herpes do not usually survive. (Photo by Henri Bergius on Flickr)

It can be hard to notice if an adult dog is infected with the virus because there are almost no symptoms to observe, aside from genital sores, which can manifest but aren’t standard. Newborn puppies who are infected will be weak, lack interest in food, have discolored faces, but usually they pass away before positive action can be taken. The virus makes its home in the respiratory and reproductive systems, so it can be transmitted either through contact with bodily fluids or through the air. Licking, sniffing, and sexual intercourse are the primary methods of transmission. Infected dogs can pass it to others in crowded spaces if they also have kennel cough.

Spay/neuter procedures can be an effective preventative measure for puppies and mature dogs that are not already infected. Like Brucellosis, canine herpes is mainly a concern among dog breeders. Unlike the Brucellosis bacteria, the kind of herpes that affects dogs is species specific, and cannot be passed to humans. There is neither a vaccine nor a cure for the herpes virus in dogs.

Unlike the two STDs we’ve covered so far, CTVT, or canine transmissible venereal tumors are neither caused by bacteria nor viruses. CTVT is an infectious form of cancer. The pinkish or reddish mature growths themselves are infectious agents, which spread from dog to dog through licking, direct contact with body fluids from open sores, or during intercourse if the disease is still internal.

Only once the cancer is advanced internally will it begin to show up on the exterior of an infected dog’s body. Left undiagnosed and untreated, the tumors continue to grow inside as they begin to manifest outside. As the tumors grow and the disease matures, they can appear on both male and female genitalia or on a dog’s face before appearing on other parts of the body. 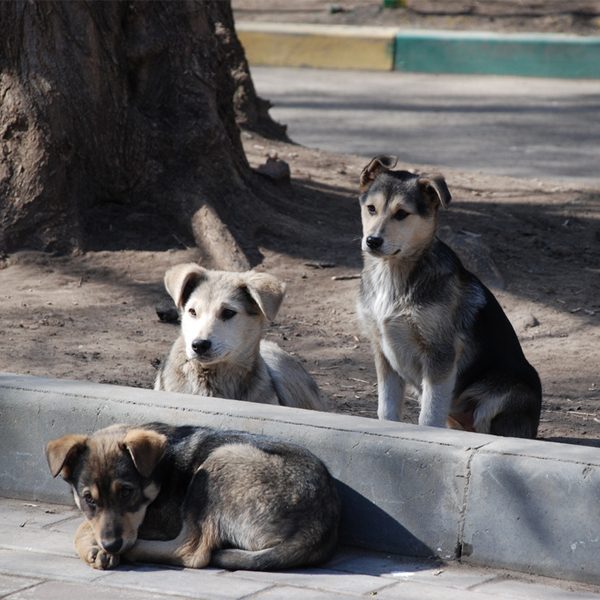 Intact strays are most susceptible to dog STDs. (Photo via Wikimedia Commons)

These disfiguring external growths only show up once the disease has been developing inside the dog for several months. The longer a dog goes undiagnosed and untreated for this form of cancer, the more dire its prospects. Among the three major canine sexually transmitted diseases, CTVT is, unfortunately, also the most common in dogs, even if the affected populations are disproportionately intact strays. In domestic dog cases, if it’s caught early on, there is a very high recovery rate.

Spay and neuter your dogs!

Finally, there is a form of chlamydia that dogs are susceptible to, but which is not considered an STD. The variety of this bacterial disease that they contract is transmitted neither through intercourse nor even contact with bodily fluids among dogs. Dog chlamydia is caused by a bacterium called Chlamydia psittaci, which they can contract through rubbing their noses into dry bird poop. Humans can be affected by this form of chlamydia, too, but, like dogs, can only catch it from birds.

Homeless, stray, feral, or wild dogs are at the highest risk for all manner of medical maladies. It is little surprise that the effects of all three of these dog STDs are felt most by the most vulnerable and least cared for dog populations. Whether you’re a proponent of early spay/neuter procedures or prefer the traditional six-month date, having your dog fixed can help prevent them contracting one of these sinister conditions.