Next on The Scoop: Dogs in Heat: 9 Things to Know
Dogs and Science 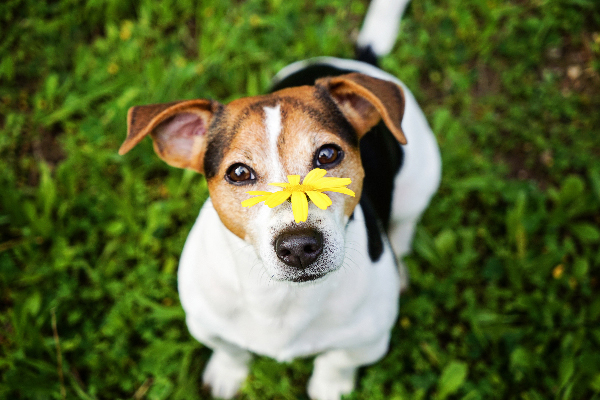 7 Amazing Facts About Your Dog’s Sense of Smell

Science is learning all kinds of things about your dog's sense of smell including this: Humans are splendidly, amazingly stinky to dogs, and they love us for it.

1. A dog’s sense of smell is way stronger than ours

Yeah, you can read that two ways, but think back to what your dog smells like when wet, and you’ll figure out the right meaning. When it comes to nose sensitivity, dogs are the paws-down winners over humans. Numbers abound about how much better a dog’s sense of smell is than ours. There are so many variables that it’s almost impossible to quantify. I’ve seen figures indicating that a dog’s sense of smell is from 10 to 100 to 1,000 to 1,000,000 times better. Scientists I’ve spoken with say that dogs can detect some, if not most, odors at concentrations of parts per trillion.

Psychologist and prolific dog book author Stanley Coren gave me an example of what that huge sniffer sensitivity looks like. Let’s say you have a gram of a component of human sweat known as butyric acid. Surprisingly, humans are quite good at smelling this. If you let it evaporate in the space of a 10-story building, many of us would still be able to detect a faint scent upon entering the building. Not bad, for a human nose. But consider this: If you put the 135-square-mile city of Philadelphia under a 300-foot-high enclosure, evaporated the gram of butyric acid and let a dog in, the average dog would still be able to detect the odor.

As clean as you are, and as much soap and perfume and deodorant you wear, you are still splendidly stinky to your dog. Every human has a unique scent fingerprint, and that’s pretty much everything a dog needs to tell one person from another. “To our dogs, we are our scent,” says canine cognition expert Alexandra Horowitz, author of the enlightening book, Inside of a Dog: What Dogs See, Smell, and Know. In that book, she writes this wonderful description about a dog’s sense of smell:

“Humans stink. The human armpit is one of the most profound sources of odor produced by any animal; our breath is a confusing melody of smells; our genitals reek. The organ that covers our body — our skin — is itself covered in sweat and sebaceous glands, which are regularly churning out fluid and oils holding our particular brand of scent. When we touch objects, we leave a bit of ourselves on them; a slough of skin, with its clutch of bacteria steadily munching and excreting away. This is our smell, our signature odor.”

3. A dog’s sense of smell picks up all sorts of invisible things

With every step you take, you shed loads of skin flakes — kind of like the Peanuts character Pigpen and his ubiquitous dirt cloud. Real people have the same billow, only it’s made up of skin cells, which, when in this flake form, are known as rafts, or scurf.

Get this: We shed 50 million skin cells each minute. Wow! “They fall like microscopic snowflakes,” Coren says. I am sitting here only moving my fingers on my keyboard because I really don’t want to shed, but no matter what I do, I’m just a snowstorm. Thankfully, we can’t see this winter wonderland ourselves. But these rafts and scurf, with their biological richness, including the bacteria that sheds with them, are very “visible” to dogs’ noses.

4. You can’t fool your dog’s sense of smell

Research indicates that it’s quite likely that a dog’s sense of smell can pick up fear, anxiety and even sadness. The flight-or-fight hormone, adrenaline, is undetectable by our noses, but dogs can apparently smell it. In addition, fear or anxiety is often accompanied by increased heart rate and blood flow, which sends telltale body chemicals more quickly to the skin surface. Trying to mask your strong feelings with a casual smile may fool your friends, but it’s not going to fool a dog’s sense of smell.

5. Dogs use their smell to send messages through peeing

I love this description of dog communiques from Coren: “Dogs read about the world through their noses, and they write their messages, at least to other dogs, in their urine.” It’s tempting to drag your dog along on a walk when he’s sniffing everything annoyingly slowly, but give him chance to read the neighborhood gossip column, and let him do a little writing while he’s at it.

6. This is what’s happening when dogs smell each other’s nether regions

When dogs start sniffing each other’s nether regions, chances are they’re learning far more about each other than you and the other dog’s owner are learning through idle chitchat. Exactly what the dogs are learning, and what they do with that information, has yet to be figured out by science. But it’s very likely far beyond “Nice weather we’re having, eh?” It’s probably more along the lines of, “Oh, you’re a nice dog, and you had chicken recently, and you’re about, um, 10 years old?”

7. Scientists are studying dogs’ noses as never before

Maybe it’s because of dogs’ role in the military as incomparable IED detectors. (See my book Soldier Dogs for lots more on how dogs do their job in the military.) Or maybe it’s that dog noses and a dog’s sense of smell are just so amazing, and the more we know, the more we want to know. A dog’s sense of smell is being studied more than ever at universities around the world. But to get to some of the more interesting research, you have to read through papers with titles like, The fluid dynamics of canine olfaction: unique nasal airflow patterns as an explanation of macrosmia. (Does Google offer a translation programs for scientific lingo?)

I look forward to sniffing out what they come up with next in regard to a dog’s sense of smell.

Plus, put your dog’s sense of smell to use with nose work or K9 nose work >>

Read Next: How the Smells Around Your House Might Delight or Offend Your Dog