Next on The Scoop: Meet 5 Winter Dogs Who Enjoy Colder Weather
Health & Care 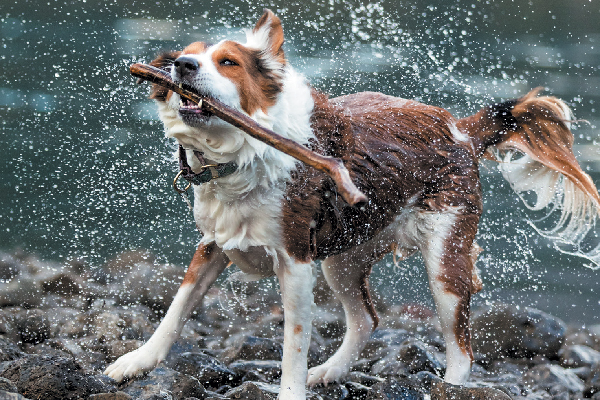 Why Do Dogs Shake? What Causes and How to Handle Dog Shaking

Why do dogs shake? There are lots of reasons why dogs shake and they range from the not-so-serious to things that require vet attention ASAP.

Leave it to dogs to shake things up. Dogs shake off water. They shake a paw. And dogs shake after napping and grooming. And some dogs just shake. Why do dogs shake? Lots of reasons.

Why do dogs shake if they’re small dogs like Chihuahuas? Small dogs like Chihuahuas shake for a variety of reasons, including getting cold easily. Photography ©Eudyptula | Getty Images.

A simple answer to “Why do dogs shake?” is because they’re cold, and in this case, size matters. We’ve all seen a whole lotta shakin’ goin’ on in small dogs. Think: Chihuahua.

“Shaking in Chihuahuas isn’t unusual,” says Linda George, who has been showing and breeding the tiny Toy Group breed for nearly 50 years through Ouachitah and Lone Pine Chihuahua in Waukesha, Wisconsin. “There can be many causes: cold, stress, fear, excitement, illness.”

With a full-grown weight of less than 6 pounds, it doesn’t take much of a chill for a Chihuahua to shiver, particularly the short-haired, smooth-coated variety that has neither girth nor long fur to retain heat and keep warm. But it’s not just Chihuahuas. Smaller dogs in general are more susceptible to cold due to their fast metabolism and high energy. Because they break down food and burn energy at a fast rate, they lose heat quickly. Check out this article on winter coats for dogs to find out how to keep small dogs like Chihuahuas warm when it’s cold out.

In addition, lighter-weight breeds can be more excitable and hyperactive, which can cause shaking, according to a University of Sydney research project published in 2013. That research also found that short breeds are more prone to things that can cause shaking, such as attachment issues, fear of other dogs and sensitivity to touch.

Why do dogs shake? The good and the bad reasons for dog shaking

So, why do dogs shake if they’re not small dogs like Chihuahuas? “Dogs can shake or tremble for a variety of reasons both medical and behavioral,” says animal behaviorist Megan E. Maxwell, PhD. “There are many cases where shaking is related to anxiety. Dogs will tremble during thunderstorms, fireworks or in response to other loud noises. They sometimes will shake during vet visits, in new places or in the car.” Or because of a refrigerator. When a couple contacted Megan about their Bichon Frise’s baffling shaking episodes, she asked them to detail each instance, including the time and location.

“In so doing, they realized that there was a reliable trigger,” says Megan, who owns Pet Behavior Change in Blacksburg, Virginia. “This little dog was experiencing a fearful reaction to the sound of the refrigerator motor kicking on. Several times a day, as the motor kicked on to cool the refrigerator temperature, the slight bump and hum sent this dog into a fearful tizzy.”

That kind of shaking is a physical response to emotions — both negative and positive. “In some cases, shaking can result from excited anticipation,” Megan says.

Simple things can set that off: the sight of a squirrel, the creaking of the treat-cabinet door, your arrival home. The anticipation of something good can cause a dog to accelerate that tail wag into a full-body shake. There’s a burst of energy, and the shaking burns it off.

When is your dog’s shaking serious?

Are the answers to “Why do dogs shake?” ever cause for concern?

“If a dog is shaking persistently and not only in response to cold temperatures, which would be a natural response, owners should first take their dog to his or her veterinarian for a full physical examination,” Megan advises. Skin or ear irritation can lead to trembling, as can pain, fever (higher than 103 degrees Fahrenheit), nausea, kidney or liver disease, or ingesting a toxin such as chocolate or the sugar substitute xylitol (if your dog has ingested a toxin, contact the Animal Poison Control Center at 888-426-4435). Often other symptoms, like diarrhea, vomiting or limping, offer a clue that it’s more serious than just shaking.

Distemper (a contagious viral infection for which there is a vaccine) and Addison’s disease (also called hypoadrenocorticism, a disorder in which the adrenal gland doesn’t produce enough of the hormones cortisol and aldosterone) also can cause shaking. Epilepsy and seizure disorders cause a severe form of shaking in which the dog loses body control and is unresponsive. Senior dogs sometimes tremble due to joint pain or discomfort.

Sometimes the answer to “Why do dogs shake?” and the treatments are less medical.

“If the veterinarian rules out any medical condition that is leading to shaking and instead suggests that it’s emotionally or behaviorally motivated (that is, it’s related to anxiety, stress or learning), then the owners might decide to work with a board-certified animal behaviorist to address it,” Megan says. “If the shaking is related to some stressor in the dog’s life or environment, then it would be of use to figure out what is causing the stress and develop a plan to reduce that stress.”

Linda advises that “socializing a puppy to all kinds of people and situations early in life may reduce shaking due to stress and fear later in life.” To help calm a shaking dog, she says, “put the dog in a crate or place where he is safe, warm and quiet.”

Other tips to put a chill on dog shaking:

Dogs do shake purposefully. And that leads to some interesting tidbits:

Why do dogs shake? Signs that a dog might be shaking due to stress, fear or anxiety:

7 comments on “Why Do Dogs Shake? What Causes and How to Handle Dog Shaking”