Next on The Scoop: Meet France’s First Dog, Nemo
Dogs in Fashion 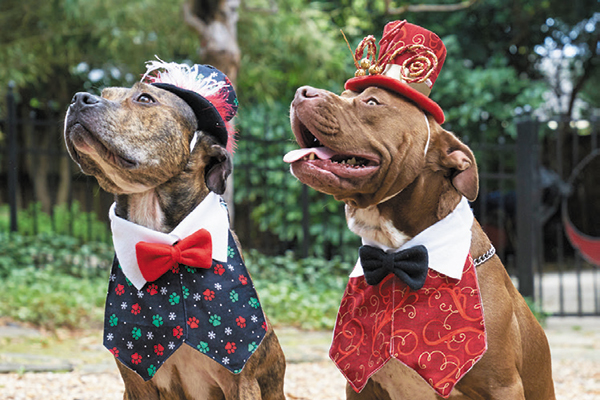 Cindy’s Creations makes adorable hats and vets for dogs that give back to local rescues.

Each year I dress up my dogs for the holiday photo card (and bribe them with treats!). I’m always on the lookout for a good seasonal outfit. So, of course, Cindy’s Creations caught my eye. She does hats — plus vests and costumes — with meaning. It all started with her sister Rachael’s rescue bully breed dog, Vegas. They worked hard with Vegas to make him a well-mannered doggie ambassador for their local dog club because he was such an absolute people lover.

“We quickly learned that despite his pleasant demeanor and perpetual smile, many people were still very unnerved by him. Some would cross the street rather than walk close. We were asked to ‘get that dog away’ from kids too many times for comfort,” Cindy says.

Then they discovered the secret to making him “Mr. Popular” — they put a pirate’s hat on Vegas for the costume contest at a Humane Society fundraiser. And suddenly parents with children wanted photos of their kids with Vegas. “After that day,” says Cindy, “any time one of our big boys represented the club or attended a dog-related event, he did so in a hat. Before long, I was getting requests to make hats for other dogs. Selling the hats allows me to donate and/or loan accessories to my favorite local rescues.”

Cindy doesn’t want to stop there. “The profits from my sales have allowed me to attend several training seminars. I would love to eventually become a full-time trainer. My dogs are part of my family, and I would enjoy helping more dogs to live happily in a home environment,” Cindy says. She’d also like to do more custom work. “Our vests have been part of several weddings, and we have done a few complete costumes that brightened front porches on Halloween. Anything that allows me to help make happy dogs.”

Her hope for the future: “I would love to see people judge a dog on his personality, not the stigma of his breed, plus see more people train and do things with their dogs.”