Next on The Scoop: Shop Pet Supplies Plus on Veterans Day to Help Retired Military Dogs

The author does what every soldier who served with Lucca did: She puts the military dog out front to lead the way.

Writer’s note: Maria Goodavage and I have known each other for several years through our work at Dogster, where she works as an occasional contributing writer.

Where to begin? Top Dog: The Story of Marine Hero Lucca is already on the New York Times “Animals” best-sellers list. No words I write regarding Maria Goodavage’s book could be more important than the credibility created by the sheer number of people buying the book, but I shall do my best to provide the “Dogster take.” 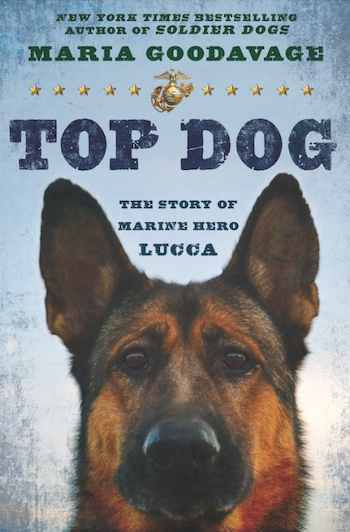 It would be misleading to think of Top Dog as merely a continuation of the author’s earlier book, Soldier Dogs. Much of that was about the procurement and training of military working dogs (MWDs), whereas Top Dog goes into the field much sooner. Lucca’s adventures with handlers Marine Staff Sergeant Chris Willingham and Corporal Juan “Rod” Rodriguez are at turns heartwarming, funny, and a white-knuckle ride through battle zones.

My favorite human character from Soldier Dogs, Staff Sergeant Kristopher “Gunny” Knight, has a lesser but still memorable role in Top Dog. Both Willingham and Knight were up for reenlistment, and the chance to reenlist in a combat theater was just too tempting to pass up. According to Willingham, “What better place to reconfirm your oath to defend the constitution than in a war zone?” Goodavage must have had a twinkle in her eye when she added this line: “Besides a hearty dose of patriotism, it didn’t hurt that reenlisting in a combat zone meant the reenlistment bonus was tax free.”

Rather than do the oath in their commanding officer’s office, the two veteran MWD handlers decided there were just too many prime locations far less banal than an office, whereupon Goodavage takes us on an interesting journey through war-torn Iraq in their search for a suitable location for taking their reenlistment oaths.

Would they choose the Perfume Palace, with its supposedly sordid history? Or perhaps the never completed Victory Over America Palace, which had a hole blasted in its ceiling by an U.S. bomb? And there were the aptly nicknamed Flintstone Village or Baghdad’s storied Green Zone, the administrative center of the Ba’th Party until the fall of Sadaam Hussein’s government. You’ll have to read the book to learn their final choice and why it took Gunny Knight three attempts to get through his reenlistment oath. 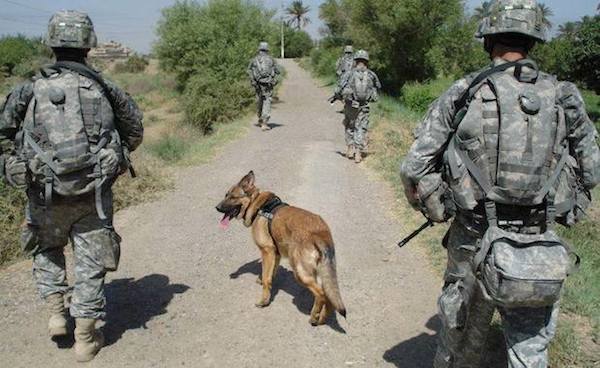 In some ways, I found Top Dog harder to read, which is actually a good thing. Whereas Soldier Dogs spent more time teaching us about military working dogs as a unique part of the military tapestry, Top Dog has us in war-zone deployment for most of the book. The reality of battle is therefore much more prevalent and makes Top Dog sterner stuff.

Only about 15 percent of the book is devoted to Lucca’s transition from active duty to civilian life. The rest of the story is about the men, women, and dogs who bravely serve our country. The battlefield sequence that costs Lucca her left front leg takes place in chapter one, so there are no surprises when the scene rolls around again in chapter 12. That the entire book holds up so well despite knowing what will eventually happen to Lucca is a testament to both the dog’s story and Goodavage’s considerable skills as a writer. You’ll laugh and cry your way through Lucca’s life as a MWD and trusted canine friend to everyone she came into contact with during her exemplary career.

While searching the house of Uday and Qusay Hussain’s house, Willingham is taken with Lucca’s steady dedication to her role in the search, and he can’t help wondering, “Can she smell evil?” For those of us whose only taste of war comes through news reports, Willingham’s question touches on the age-old problem veterans face when they return home. How do you explain the horror and evil of war to someone who has not experienced it firsthand? 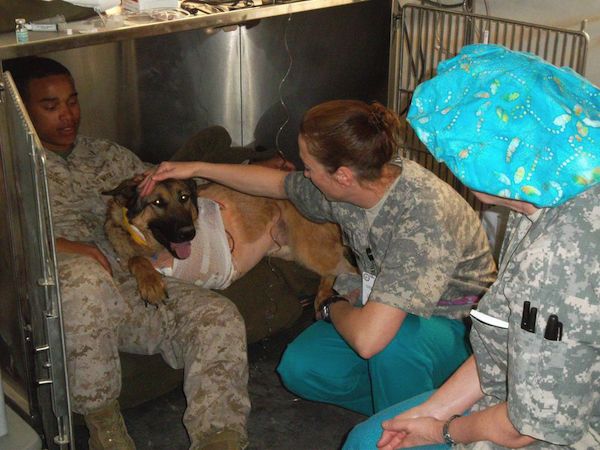 For a MWD like Lucca, finding IEDs (improvised explosive devices) is a game with the reward of a Kong toy and affection from her handler. Yet Willingham and Rodriguez both sensed something additional in Lucca, an almost sixth sense, which makes one believe Lucca understood her role to a greater depth than most MWDs.

It would be unfair, of course, for me to speculate on the deeper feelings of Willingham and Rodriguez, or of Lucca herself. As for Goodavage, she is content to let Lucca’s story speak for itself. There is something noble in Lucca and her story, which transcends the book. Some intangible quality of life, love, duty, and loyalty that go beyond Willingham, Rodriguez, Gunny Knight, and the other players in Lucca’s story.

I am thankful for their service. I am touched by their story — a love story, really, deeper than mere words can convey. Goodavage has done all of us a great service with Top Dog.

After a particularly memorable field operation in which Lucca prevents her platoon from stumbling into an IED trap, the grateful platoon leader says to Willingham and Lucca, “From now on, you two are out front.”

You don’t put anyone, dog or man, out front in a battle zone if you cannot trust them. You can trust this book to be a good read, not because I am telling you so, but because Goodavage has done what every soldier did who served with Lucca: She put Lucca out front to lead the way.

Top Dog: The Story of Marine Hero Lucca, published by Dutton/Penguin, is now in stores. Read our interview with Goodavage. Read more about Lucca at the Solider Dogs’ Facebook page and website.

Read more about Lucca and other military dogs: