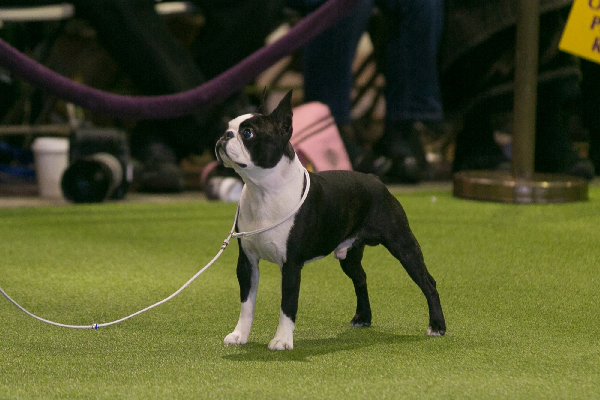 With his gracious smile, a polished bow, and a slight wink, the Boston Terrier is not only a tuxedo-clad class act; he’s occasionally the class clown.

The Boston Terrier receives the nickname American Gentleman with a gracious smile, a polished bow, and a slight wink. For he’s not only a tuxedo-clad class act; he’s occasionally the class clown.

The Boston Terrier was developed the American way, the result of a melting pot of ancestors. Specifically, Bostons were bred from English Bulldogs and white English Terrier dogs. The early breed crossings sought out new fighting dogs, but the breeding emphasis turned quickly to companionship. And let’s give a shout-out to a notable ancestor of the breed, a crossbred Bulldog-Terrier named Judge who was paired with a lovely female named Gyp. Their offspring are considered ancestors to today’s Bostons. Early Bostons were called Round Heads (a name they probably happily gave up) but changed to Boston Terrier in 1891.

The fun-seeking and even-keeled Boston flourishes with family time. Although lively, the Boston focuses on friendship and frolic — not marathon exercise sessions. He’ll enjoy a walk and playtime but won’t beg for extra long hikes or give a hoot about the size of your yard. The Boston usually adapts well to apartment living; neighbors will appreciate his generally nonbarky nature. Sturdy, compact, and sporty, a Boston thrives in activities like rally, agility, flyball, and weight pulling. In the yard, most Bostons give joyful chase to small prey (remember, they have terrier genes!).

The Boston also appreciates dining. In fact, he’ll likely eat anything you give him.

As for obedience class, you should head to school anticipating the stubborn Bulldog-ish streak. More than one Boston has been known to lie down in class to snooze.

If you’re searching for a dog who will love you and only you, keep looking. Bostons love their families, but most celebrate new friends, too. A Boston may bark when a newcomer rings the bell, but his bark soon turns to a come in-and-play greeting when the door opens.

Around other dogs, Bostons are generally approachable, but they don’t typically tuck tail and run when challenged, even by larger dogs. Most Bostons are generally good-natured with children, viewing them as new playmates, chase buddies, or ball throwers. And with his affectionate and even-tempered nature, the Boston also makes a good companion for aging adults. 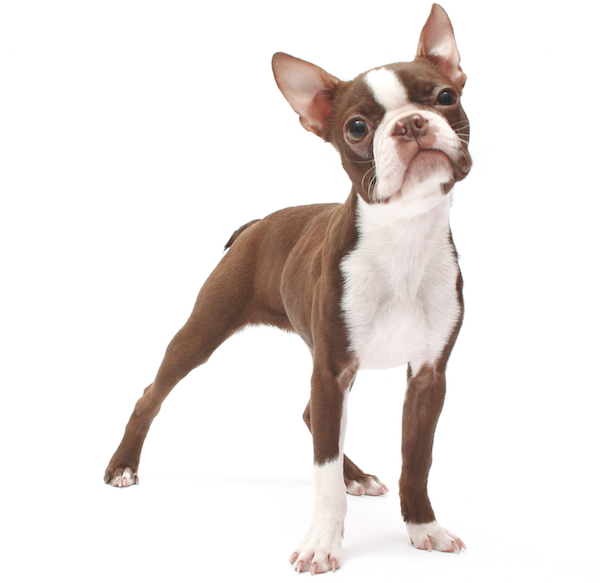 The upkeep of a gentleman

Bostons belong to a class of dogs called brachycephalic, which simply means they have a short, wide skull shape. They’re prone to overheating; don’t sign them up for long, hot, summer hikes. In winter, the Boston’s coat won’t offer much protection. But, fortunately, since the coat requires minimal grooming, you can spend the extra time knitting sweaters to keep your companion warm.

A cheery breed, the Boston’s motto might be borrowed from Emily Dickinson: The mere sense of living is joy enough! If the Boston wanted to show even more sophistication, he might revise the words from the Roman philosopher Seneca for a motto: “It’s more fitting for a dog to laugh in life than lament.” The bottom line: The joyful Boston is definitely the American Gentleman, not the American Grump.

Can’t get enough of Boston Terriers and Boston collectors’ items? Even though the Boston is the state dog of Massachusetts, you’ll need to go to Floydada, Texas, to see the biggest collection. The Boston Terrier Museum, owned by Bob Hambright, is filled with Boston Terrier toys, shot glasses, statues, pipes, doorstops, paperweights, and more.

As Bob and his wife’s collection of Boston items grew, they realized they needed more space. “I found a building that had been a prior hospital and converted it to a museum,” Bob said. “At first, I didn’t think I had enough items to justify all that space, but now I don’t have a bit of space left.” Bob, who has shared his life with many Boston Terriers, opens his museum on 206 West Houston to Boston Terrier enthusiasts upon request.

Feast your eyes on a Boston

In 2014, Disney made a delightful animated short film, Feast, featuring Boston Terrier Winston and his owner, James. As James starts off on the path of love, we follow along from his fourlegged companion’s vantage point. Along the way, we enjoy watching Winston’s uninhibited passion for a good feast or for simple table scraps.