Next on The Scoop: Get to Know These Eight Irish Dog Breeds
Dogster Tips 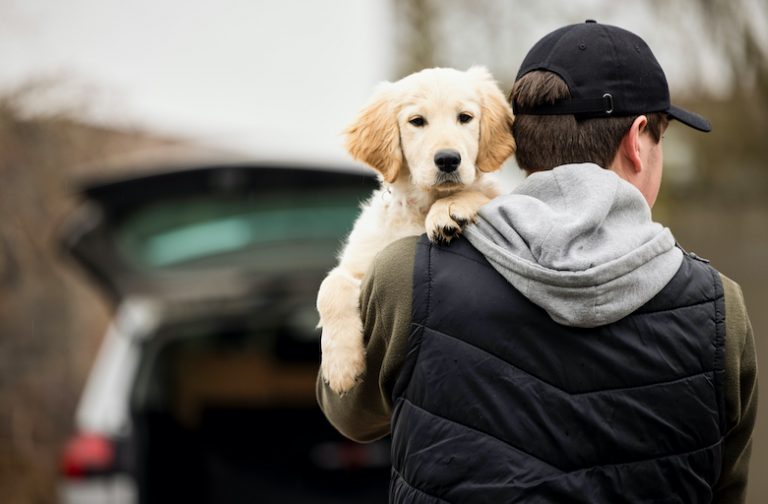 Here’s how to protect against dog theft, and what to do if someone steals your dog.

Would your dog walker take a bullet to protect your dogs? None of us ever want to think that we or our dog walkers could be put in that position but that’s exactly what happened with Lady Gaga’s dog walker.

Lady Gaga’s dog walker,  Ryan Fisher who is a close family friend was walking the dogs when multiple people got out of a car and began attacking him. In footage shared by CNN and other news outlets, Fisher can be heard fighting back and trying to keep Lady Gaga’s French Bulldogs from the dognappers when he was shot in the chest. Two of the dogs were stolen while a third Miss Asia was found by Lady Gaga’s bodyguard.

Thankfully, Fisher survived the attack and is expected to recover and the dogs, Gustav and Koji were recovered.

As a dog parent, one of my worst nightmares is dognapping and I’m obsessive about the safety of my own dog, but I still worry. How do you prevent dognapping? What can you do if your dog is stolen and how can you get a stolen dog back? Are certain breeds or types of dogs more likely to be dognapped than others? Here’s what dog parents need to know about dognapping.

The story of Lady Gaga’s dogs being stolen is especially scary and unfortunately, it’s not as uncommon as you might think. Earlier this year a San Francisco woman was robbed at gunpoint and her French Bulldog puppy was taken from her.

An estimated two million pets are stolen every year in the United States. And it’s believed that incidences of dognapping are rising due to increased demand for dogs and puppies, during the COVID-19 pandemic. The American Kennel Club, which tracks instances of dog theft from their National Pet Theft Database,  has found a 31 percent increase in dognappings in recent years, with newly stolen dogs reported daily from communities across the country.

Dognappings happen for many reasons and dogs may change hands multiple times after being stolen, which makes them even harder to locate. Thieves often steal dogs hoping to make money off of them. This might be someone looking to collect a reward, or something even more sinister.

Intact dogs (canines that aren’t spayed or neutered) may be sold to puppy mills or backyard breeders, small dogs or dogs of popular, expensive breeds might be taken and resold, or dogs may be sold to dog fighting rings either as fighters or bait dogs.

According to Pet FBI, some of the top small dogs targeted for cash include purebred Yorkshire Terriers, Pomeranians, Maltese and Chihuahuas, while Pit Bulls, Boston Terriers, German Shepherd Dogs and Boxers fall victim to theft for dogfighting rings. For the past few years NYC has seen a rise  in dognappings of small dogs in return for cash. This is sometimes referred to as “dog flipping” where people will take, or even respond to lost dog ads and then resell those dogs for a profit. If your dog is ever stolen contact law enforcement in your local area immediately.

How can you keep your dog safe?

Be proactive about dognapping. Hopefully, your dog never goes missing, but you’ll need to prove he belongs to you if he does. Microchip your dog, and ensure that your contact information is up to date with your microchip company. Thieves could remove a collar and tags, but microchips are permanent forms of identification for your dog.

Hire professionals when it comes to pet-care providers. While we can only hope that our dog walkers and dog sitters would be as protective as Gaga’s and literally take a bullet to protect our dogs, realistically the most important thing is to ensure that we hire skilled and experienced professionals. In recent years, there have been several high-profile cases of dogs going missing while in the care of dog sitters — and never being seen again. Only hire responsible, insured and trusted pet-care providers and always check references before hiring a walker, daycare or sitter.

Use caution with overly curious strangers. Be very guarded with your dog’s information. Sometimes, dognappers will try to determine how much a dog is worth, and if they’re spayed or neutered before taking them. Deflect and avoid answering detailed questions from strangers — particularly about how much your dog cost.

What to do if someone steals your dog

Get help. Immediately call the police and your local animal control department. File a police report.

Talk to everyone. Try to find any witnesses who might have seen the dognapping occur. This will help you and the police get information about who has or had your dog. Distribute current, clear photos of your dog right away.

Research and use every available resource. Search out local lost and found groups online and on Facebook. Other helpful sites include:

Contact the media. Social media sites like Facebook are instrumental in spreading the word about lost or stolen dogs. Don’t forget to contact your local media — newspapers, TV and radio — to try to increase coverage of your dog’s disappearance.

Protect yourself, too. People whose dogs are missing are vulnerable to being taken advantage of even further. I can’t even imagine how desperate I would be if something happened to one of my dogs — I would want to do everything and anything in my power to get them back.

The Better Business Bureau warns pet owners to watch out for scam artists who demand reward money before they return the missing dog.

For example, someone calling to say they are a long-haul truck driver who found your dog out of state and requesting money to get your dog back to your state, or someone saying they need money for airline tickets and a crate to ship your lost dog back.

Read Next: When Should You Call an Emergency Vet and How Do You Find One?

20 comments on “Dognapping: How to Protect Your Dog and How to Get Your Dog Back If He’s Stolen”