4 Things I Learned When My Dog Swallowed a Soft Toy

It never fails; emergencies with our dogs always seem to happen in the middle of the night. Most of us always hope we can wait until morning to see our vet. Not so when your dog has ingested something potentially harmful. Such was the case when Zoe, our Saluki, decided to consume her favorite toy, a small, pink, plush Flamingo.

It all started when Zoe began playing with her favorite toy at 11 p.m. She seemed a little off, as if her hormones were out of balance. Her actions were telling me it was not your normal dog toy game, where the object is thrown up in the air and caught. Definitely not one of those entertaining games our dogs seem to love to play. Zoe’s eyes had a look to them that was almost menacing.

I decided I should get the flamingo out of her mouth because her body language said she was thinking about consuming it. The minute I went to grab the toy, Zoe she ran off. I pursued and followed her to our backyard. Each time I would go to grab it, Zoe would run away, as if playing a game of “catch me if you can.” As I watched Zoe, I now knew without a doubt she was going to swallow the toy. Within a minute or so, right in front of my eyes, I watched her take a big gulp. The toy was gone.

I have heard stories of dogs swallowing socks, underwear, peach pits, balls, branches, spools of thread or yarn, but luckily my dogs had never done such a thing — until now.

Recently, I spoke with veterinarian Dana Bliefer of Rose City Veterinary Hospital. She described an incidence in which a German Shepherd who had arrived from abroad had, unbeknownst to the new owner, a toy lodged in his intestine. The dog had vomited a portion of the toy, but the remainder was stuck in the colon.

Because this toy was hollow in the middle, it allowed the dog’s stool to pass through. After several weeks, the dog started to feel bad and developed diarrhea. Soon after, the dog’s owners decided to have the dog examined, and an X-ray diagnosed the problem. Fortunately, with surgery, the dog survived.

When asked how often dogs swallow unwanted things, Dr Bliefer said, “We see patients of all ages for ingestion of a foreign object, on a weekly basis.”

“We do not actually pump the dog’s stomach. In the event the client was quick in their response, we can activate vomiting to try and get the foreign object out,” she said. “In some cases, when the patient has ingested medication or toxins, we will treat with charcoal.”

“For patients who have been experiencing symptoms (vomiting, diarrhea, not eating, no bowel movement) of a foreign object, we will take X-rays,” she continued. “In the event of an abnormality on the X-ray, we will perform a barium series, which typically takes six to eight hours, while keeping them hydrated before ruling on surgery. If there is no movement in the barium, we will go into surgery. Maybe 40 to 50 percent of cases go to surgery.”

None of us want to go to the emergency vet, but sometimes we must. Here is what I learned from my experience with the ingested toy:

1. There is a two-hour window

In the midnight call to the vet, I learned you have a two-hour window in which to have the dog examined and to hopefully safely extract the foreign object that he swallowed before the item makes its way into his intestines. This is critical, and can potentially make the difference between swift removal of the object or surgery.

When your dog swallows something she should not, do not wait around deciding whether to go to the vet. If you do not know what she swallowed, go immediately to the vet and have an X-ray taken. If you do know what she ingested, determine if it has something hard or sharp in it that might get stuck somewhere in your dog’s GI system. Think about the size of the object. Will the unwanted item make it through the intestines?

3. Inducing vomiting may be an option

If your dog has swallowed a foreign object and it is not sharp or metal, most likely vomiting can be induced in the critical two-hour window before the item reaches the intestines. It is advisable to coat your dog’s stomach with food. In my case, I had just fed my dog cottage cheese, which turned out to be the perfect conductor for coating the esophagus and stomach. If the object is sharp, you do not want to induce vomiting because the item could tear your dog’s esophagus. For this reason, it is important to do the X-rays to determine if the object can make its way back up the esophagus.

Do not second-guess what you should do. It could be a matter of life and death or surgery.

Dr Bliefer suggests that when your dog swallows a foreign object, “Call your veterinarian/local emergency veterinary hospital for assistance. The quicker the response, the better the outcome.”

In my circumstance, although the flamingo would have most likely harmlessly passed through the intestines, I did not want to take a chance. My peace of mind was worth every penny of the vet bill I incurred.

I lucked out and did not need the X-ray. Vomiting did the trick, and the vet came back into the room with a small item inside a sandwich bag — pink and white with little curds of cottage cheese on it — saying, “Is this your dog’s favorite toy? Do you still want it?” At that moment, I never wanted to see that flamingo ever again.

This was a one-time experience I hope will never happen again, but I can say that since then, I have been to the emergency vet several times on other issues. This particular event instilled in me the need to not question myself. My dog’s well-being is too important; it comes first.

About the author: Cori Solomon is an award-winning freelance writer/photographer residing in Los Angeles, California, with her husband and four Salukis. Cori’s background is real estate, and she also is an award winning animal artist; her art plays an important role in her writing as she utilizes the palette both visually and verbally in many of her articles. As Cori often travels with her dogs, she also writes about pet-friendly hotels and locations. 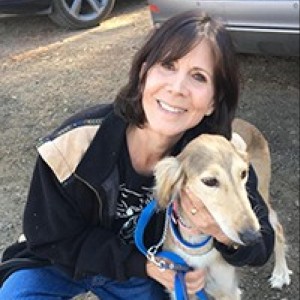 Cori Solomon, an award-winning writer/photographer in Los Angeles, often travels with her dogs. Her blog, The Written Palette, features eclectic articles focused on travel, wine, art, and pets.  As an animal artist, her articles utilize the art palette both visually and verbally.
Comments