Next on The Scoop: Researchers 3D Print New Skull for Dog with Cancer
Ask a Trainer 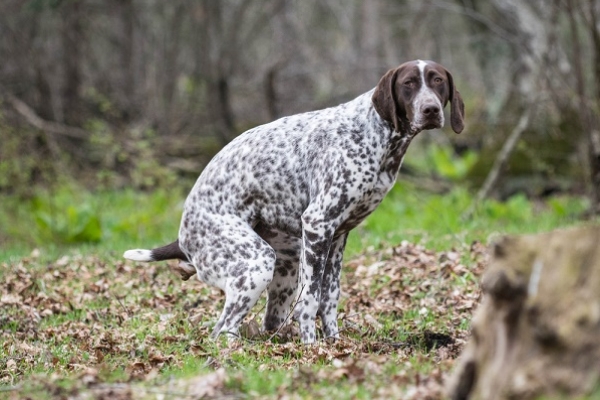 Is Your Dog Eating Poop? It’s Called Coprophagia and Here’s How to Fix It

A dog eating poop — aka coprophagia — is a pretty common (albeit gross) canine behavior, but there are a few steps you can take to stop it from happening!

Is your dog eating poop? Well, there’s a scientific name for a dog eating poop — coprophagia. I first noticed something was amiss when Mischief, my youngest dog, didn’t come in after her last potty break of the night. When I called her, she took a couple quick, habitual steps in my direction, then darted back to swallow something in the snow before running in. My suspicions about her out-of-character behavior were confirmed at 3 a.m., when she woke me out of a sound sleep by vomiting up three large puddles of … poop.

I’ll spare you the details of my early morning clean-up, other than to say that I left a window cracked for a couple hours, heating bills be damned. Instead, let’s skip over that awful night and speak of more constructive things. Namely: Is your dog eating poop? Why do dogs eat poop, and how can we stop coprophagia in its tracks?

First, why do dogs eat poop?

Why in the world do dogs eat their poop and what can you do to stop it? Photography by ©LeoPatrizi | Getty Images.

Is your dog eating poop? It’s not as weird as you think. While coprophagia is disgusting to us, it is a normal behavior for dogs. Some experts theorize that this behavior is the root of domestication. Wild canids would eat human refuse outside of settlements, and over time these animals came to resemble our domestic dogs more and more. Mother dogs eat their puppies’ excrement until the pups are about four weeks. Dogs like poop, and their digestive systems are designed in such a way that they can often gain nutrition from the waste products of other animals.

All that said, a dog eating poop is not a behavior most of us will tolerate in our companion dogs. There are some health risks to a dog eating poop, such as an increased risk of parasites (some of which are zoonotic, which means that people can get them, too). If your dog has allergies, as one of mine does, the undigested remnants of allergens in the poop of animals fed certain diets can trigger an allergic reaction.

As soon as I realized what Mischief was up to, I sprang into action. There are two important aspects to any treatment plan dealing with a dog eating poop: management and training. Let’s start with management.

How to stop a dog eating poop, or coprophagia

The more your dog practices any behavior, be it a dog eating poop or sitting politely to greet guests, the better the dog gets at that behavior. For a dog eating poop, this means preventing him from “practicing” that poop-eating behavior is of vital importance. There are several ways to do this.

Management in place, I could get down to training to stop the coprophagia. While there are several food additives on the market that claim to make the dog’s poop unappetizing, these options were not available to me due to Layla’s severe allergies. If you go this route, it’s important to treat every dog in the household, or the offending dog will learn to just keep trying in order to find an unadulterated pile to munch on. These additives are not completely effective, although they can work for some dogs.

Training your dog not to eat poop

Mischief already had a pretty reliable “leave-it” cue, where she would back away from whatever she was interested in when asked. I reviewed it with her, setting out toys and treats, so that I could make sure her self control was where it needed to be. If she couldn’t ignore an open container of hot dogs on the ground while she heeled, how could I expect her to ignore dog poop on the ground when she was running around in the backyard?

We practiced lots of moving leave-its, and she was able to successfully recall and heel past all sorts of distractions. We didn’t bother to practice stationary leave-its (where the dog is sitting or lying down before the distraction appears), since these didn’t have anything to do with the real-life situation she’d be placed in.

I am now going outside with Mischief every time she goes out. She wears her muzzle if she’s going to be off-leash or if I can’t completely supervise her. If she starts to scrounge in the snow, I say “leave it” and reward her compliance with her favorite treats (a little piece of blue cheese or roast beef).

Since my goal is for her to be responsible without my help, I jackpot her with several pieces of this food and lots of praise any time she chooses to pass a pile of poop without my prompting. Over time, I will start allowing her to go out on a long leash while I supervise from the doorway, and then gradually progress to allowing her off-leash freedom again.

The final word on a dog eating poop

A dog eating poop is undoubtedly disgusting, but like all other behavior problems, it can be solved. And as anyone who has ever had to clean up a mess of the sort Mischief presented me with the other night can attest, it’s well worth the effort to coprophagia in its tracks.

If you need little extra help solving a tough coprophagia problem with your dog, don’t be afraid to call in an expert. I frequently help families with this issue through private consultations.

Tell us: Is your dog eating poop? Share your tips and stories about coprophagia in the comments!

This piece was originally published in 2013.

50 comments on “Is Your Dog Eating Poop? It’s Called Coprophagia and Here’s How to Fix It”