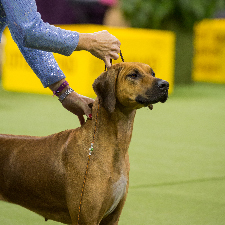 Renowned for the remarkable ridge on his back, the Rhodesian Ridgeback is a dignified and devoted hound. Active, strong and tough, the Ridgeback is also kindhearted and gentle with loved ones.

Renowned for the remarkable ridge on his back, the Rhodesian Ridgeback is a dignified and devoted hound. Active, strong and tough, the Ridgeback is also kindhearted and gentle with loved ones.

How the Rhodesian Ridgeback came to be In the 17th century, when Dutch and German farmers and ranchers set out from shipping centers at South Africa’s Cape of Good Hope, they brought their large dogs with them. Working both as property guardians and big-game trackers, these dogs weren’t altogether suited to the new terrain, climate and wildlife threats.

By breeding their own stock to indigenous dogs (who often carried the ridged back gene) who worked with native hunters, the settlers developed the tough forefathers of today’s Rhodesian Ridgeback. These early ancestors were famous for tracking and holding lions at bay but also for working as general hunters, guardians and companions.

Ain’t nothing but a hound dog

Like all hunting hounds, Ridgebacks are independent. They have strong views of their own that may (or may not!) match up to their owners’ opinions. Although intelligent and generally amiable, they’re not the easiest dog breed to train. With a patient owner and plenty of motivation, the Ridgeback can master obedience. His natural gifts, however, match him most ideally with sports such as lure coursing, tracking or hiking.

Although a strong hunter, the Rhodesian Ridgeback prefers heat to cold — after all, he was developed in Africa! He’ll need a sweater or coat when the temps start to drop below freezing. He’ll also appreciate a blanket to crawl under in the winter months.

Distinct from most other hounds, the Rhodesian Ridgeback has a territorial drive. In general, a Ridgeback doesn’t greet strangers like loved ones. With early socialization he’ll easily learn to make discriminating choices about his guarding instincts, and he’ll show good manners with newcomers.

“Like the Ridgeback, I too have ties to Africa,” says Rhodesian Ridgeback owner, author and World Police and Fire Games gold medal winner, Cinda Adams Brooks of Texas. In Heartprints of Africa (2015), Cinda describes her childhood in Africa (her parents were medical missionaries) as well as her return to Uganda in 2004 during a tumultuous civil war. Here in the states, Cinda continues to hear Africa whispering and beckoning.

Moved by the heartprint Africa left on her, Cinda chose a dog breed originating in the country.“Growing up in East Africa where Ridgebacks find their origin, I developed a deep appreciation for their majestic beauty, strength and love,” she says. Today Cinda enjoys life with Buddy, her 5-year-old Rhodesian Ridgeback. “Buddy joyfully runs and plays right alongside me,” she says. “He’s fiercely loyal, athletic, stubborn, independent and passionately loving.” Buddy travels with Cinda and her husband in their Airstream and works by Cinda’s side as she trains for running/shooting biathlons. “He’s a true buddy,” Cinda says. “He even has his own ear protection!”

But Ridgebacks aren’t only sport-focused; they have a soft side that Buddy specifically displays in his work with children. “Buddy and I are certified as a pet therapy team for The Dog Alliance’s Bow Wow Therapy Program,” Cinda says. “He provides listening ears and tender attention to the child readers in the library.”