Next on The Scoop: Do Dogs Cry Tears? Let’s Discuss Dogs and Crying
Good Causes 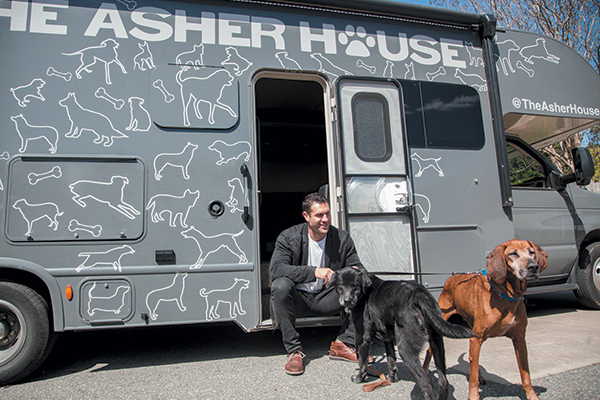 The Asher House: Raising Awareness and Getting Dogs Adopted

Lee Asher and Luke Barton of The Asher House help get dogs adopted and raise awareness about shelter dogs. Discover their story and how you can help.

If you could quit your job, buy an RV, take your dogs and travel the continental 48 states visiting animal shelters to help dogs get adopted, would you? Meet our latest Be Furractive inspiration: Lee Asher of The Asher House.

The premise behind The Asher House

Lee is traveling the country in a pimped out, sexy RV (in his words), with his six rescued dogs — all purebreds — and his best friend and photographer Luke Barton. Together they’re visiting animal shelters in 48 states to help get dogs adopted, raise awareness of the amount of dogs (and other pets) in need of homes and take the stigma away from shelter dogs.

“We want people to realize how adopting a pet is cool and that they can find any breed or mixed breed of dog available for adoption,” Lee says. Lee wants to cut the euthanasia rate in this country in half. A goal, he says, he is very determined to do and hopes that their tour across the country opens more people’s minds to go and adopt.

At press time of this article, they have covered 20-plus states and have already met their initial goal of getting 48 dogs adopted (one in each state), with 71 dogs adopted as of early May 2018.

You may have already seen one of Lee’s many videos shared on social media or his Instagram account. Lee is handsome and fit, and stands 6 feet, 5 inches tall. But Lee is often seen on video talking in a high-pitched voice or giving hilarious, colorful commentary (a lot of which we can’t print) to his dogs. His infectious love for his dogs combined with his wit are winning over fans everywhere.

Why take The Asher House across the country?

How did Lee come up with the cross-country idea? “I don’t think it would have happened if I wasn’t getting so much support from people all over the world,” he says. “I always love influencing people to be more positive, laugh more, do more and so forth. When I saw how my lifestyle with my dogs was positively affecting people — I knew I had to do something more.”

Lee didn’t have the idea until he quit his job running a finance company and managing 37 people. “One of the inspirations behind this journey is people would meet my dogs regularly and could not believe how well-behaved and trained they all are and that they were all adopted from a shelter,” he says.

“I thought this would be a great way to educate the world. I didn’t know it would go worldwide — many people around the world are now sending me pictures of their newly adopted dog — which is beautiful.”

On the rescue trail

Lee’s cross-country trip officially started February 15, 2018, after a successful Kickstarter campaign raised funds to pursue this lifesaving, educational adventure. With 853 backers that donated $37,000, Best Bully Sticks stepped up and donated $20,000 to the cause and is one of the sponsors.

“Right now, rescuing is not considered the cool thing to do, but I believe rescuing/adopting is the coolest thing ever,” Lee says. He adds that when you rescue a dog you’re literally saving two dogs: the one you adopted and the one you make room for in the shelter.

“We want to shine a new light — make it sexy, fun. We are two guys who are best friends and like to have a good time, like to go out, love people, and we are very passionate about rescuing dogs.”

At each animal shelter stop, they are greeted by fans. People line up to meet him and his dogs, and his fans even adopt from the shelter they are at that day. The Asher House helps with adoption fees, and a month’s supply of dog food is provided by MyOllie, another sponsor.

The best part of the tour for Lee? “The reason I love my dogs so much is because of how much fun we have together,” he says. “They are consistent, constant entertainment, and to be able to have this journey with my dogs, to places I haven’t even been before with them, it is the most beautiful thing. To be able to see them go from a shelter environment to living this life now, it makes me so happy to see.”

The Asher House will help get more dogs rescued and adopted. Photography by Luke Barton (@woofadventures1).

The Asher House is becoming a nonprofit organization so that Lee can open a sanctuary for all kinds of animals. The nonprofit will fundraise, with 100 percent of the proceeds going toward the sanctuary and to help more dogs get rescued and adopted.

Dogster asked Lee what people — those who can’t quit their jobs and hit the road with their pups — can do in their own communities. “Stop talking about rescuing, stop sharing every sad video, and instead go to the shelter!” Lee says.

“If you have the time to volunteer and walk a dog, do that. Many dogs in shelters are lucky if they get out of their cages one time a week for a walk. If people really want to make a difference, go to your local animal shelter and see how you can get involved. It’s selfish to say ‘It’s too sad for me, I don’t want to go.’ Stop being a baby, go to the animal shelter, volunteer, donate and, most of all, adopt.”

Lee’s sincere love and appreciation for animals shines through when you talk with him. His enthusiasm is contagious, and if you’re not following him yet you should be — he may just inspire you to adopt or get out there and volunteer.

Nancy Hassel is the pet parent of Pit Bull Cody and the president of American Pet Professionals, an award-winning business networking and educational organization for the pet industry since 2009. Nancy travels the country as a speaker, media and public relations specialist, working with pet companies in many aspects including event planning and training for pet professionals. Find her on Instagram and Twitter at @AmericanPetPros.

8 comments on “The Asher House: Raising Awareness and Getting Dogs Adopted”