Next on The Scoop: Dehydration in Dogs — Is Your Dog at Risk?
Working Dogs 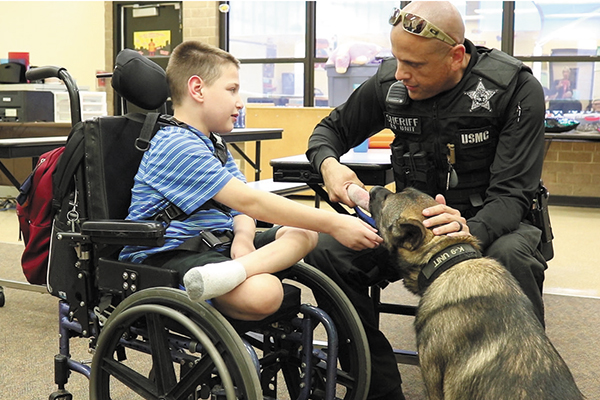 An amazing K-9 in the field and partner to his handler, Deputy Richard Castellon, Kylo makes a difference in the community.

Meet Kylo — a 16-month-old German Shepherd narcotics detection dog who works with his handler, Deputy Richard Castellon, to detect and remove illegal drugs from the 67 schools in Lee County, Florida.

A video on YouTube (K9 Kylo Gets the Job Done) shows Kylo doing a typical vehicle sweep in the parking lot at one of the schools. He’s been trained to detect specific odors, and when he hits one of those odors, he immediately goes into a Sit, letting Deputy Castellon know that he’s found something.

When they’re not out detecting, Kylo and Officer Castellon do K-9 demonstrations for the students and educate them on the dangers of drugs. The kids are always excited to see Kylo and often ask their teachers when he’s coming back.

Deputy Castellon tells us that Kylo has received well over 200 thank you cards from the students who have participated in one of Kylo’s demonstrations.

They also spend lots of time visiting the public schools’ special-needs departments. Kylo loves interacting with the kids, which helps them build relationships and encourage learning.

Kylo also volunteers with the local Make-A-Wish Foundation during fundraisers and assists the Youth Committee group with demonstrations.

Kylo definitely has a full schedule! In his downtime, his favorite thing to do is hang out with Deputy Castellon’s kids and play catch. And let’s not forget eating! As Deputy Castellon says, “You can say he’s a foodie.”