Next on The Scoop: Organix-South’s Neem Soaps and Sprays Keep Bugs Off Dogs

An Update on Dre, the Colorado Pit Mix In Danger of Being Put Down

Dre, who hurt nobody, is still awaiting his vicious-dog trial, but conditions at his shelter have improved.

Earlier this month we told you about Dre, a Pit Bull mix who is in danger of being euthanized in Colorado. If you missed that report, here’s the short version:

What Happened: One of Mary O’Brien’s children accidentally pressed a button on the remote garage door opener at their home in Brighton, CO. Her cousin was babysitting at the time and did not realize what had happened. Dre and Machomotto, the family’s dogs, ran outside through the open garage door.

Dre began barking at people, and one woman jumped into her car, apparently in fear. A few folks called animal control, with one call placed to 911 to report “vicious dogs running loose.” Five officers were reported to have secured Dre, but in the process no one was injured, bitten, or scratched. 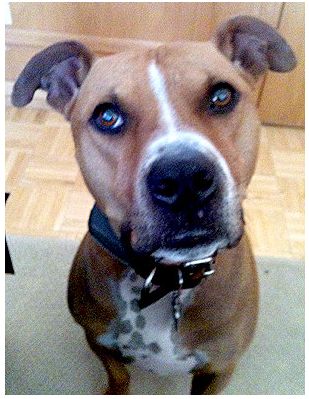 Dre was held at a shelter in Brighton, where there is no breed-specific legislation in place as there is in Northern Ireland, where Lennox the dog was put down because he resembles a Pit Bull. But when O’Brien went to retrieve her dogs from the pound, she was allowed to take Machomotto, but not Dre. He was quarantined and labeled “vicious” with the recommendation that the dog be destroyed. Dre is a Pit Bull.

Since That Time: Dre had been held in Animal Control where he was not allowed to have his special diet and medicated baths, and the family could only interact with him through a cage with a sign that announced “Dangerous Dog: Will Bite.” Supporters held silent protests and contacted television news stations, and a lawyer from Animal Law Center was on the case. Dre is still being held from the family, although he’s been moved to a safer place, where he is allowed interaction and visitation.

On Friday, August 17, Dre’s mom wrote on her Facebook wall, “Another wonderful visit with Dre. The kids got to hug and love all over him. It’s so amazing to see him run and roll in the grass! Play ball, Frisbee, lounge, etc!!! Absolutely ecstatic that he’s in such a better, safer, cleaner shelter. I trust that he will be well taken care of …. It’s all so bitter sweet. We truly miss him more than words can express. So grateful for EACH and EVERY ONE of you who have helped support, laughed, and cried with us. We will never forget it …. Love, the O’Briens.”

I sat in the court room today listening to the emergency motion to have Dre moved to a different shelter and I was hopeful. I’m happy to report that hope was not unfounded. Dre has been released from Brighton Animal Control and has been placed in an undisclosed rescue/shelter! He will get the proper food, care for his ears, vet care in general, his baths with his special shampoo for his skin, and some actual outside time and attention. The next court date has been moved to August 28 and Dre will remain at the rescue/shelter for the remainder of the trial, but he will be cared for, as he should be, that entire time!

This does NOT mean that Dre’s fight is over. This doesn’t change the case or the allegations at all. It just means Dre will be happier while his family fights for his freedom. And fight they will! Free Dre!”

A ChipIn account has been set up to help with defense costs. In addition, the Pit Bull Advocate has been podcasting details as they arise on Blog Talk Radio, where you can catch up.