The loyal Labrador retriever we wrote about yesterday who refused to leave the side of her dead fellow retriever on a busy roadway is heading home today. Worried family members had been looking for her since she disappeared the other day.

In fact, animal control workers say that as their dog was guarding her friend who’d been killed by a car, the family was searching for her at the very shelter where she later ended up. 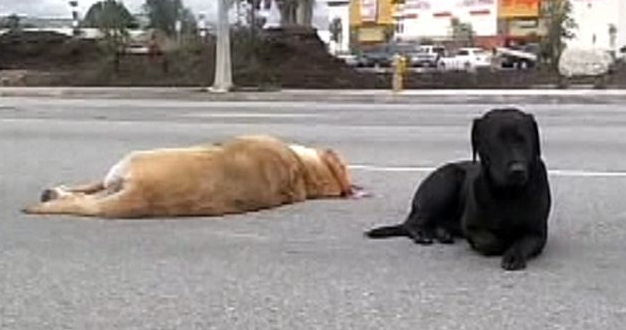 It’s not clear why it took a couple more days for the family to officially claim her, but it probably had something to do with the shelter being closed for the remainder of the weekend, and the family having to supply proof of ownership. The dog will be returned today, pending inspection of the family’s home. According to reports, she was extremely happy to see them Monday.

The dog, who rescue personnel named Grace, is actually named Maggie. She is two years old. She was not microchipped, and wore no identification. She also wasn’t spayed, but veterinary staff at the Los Angeles County Department of Animal Care and Control shelter in Baldwin Park performed that surgery yesterday.

The family’s name has not been released. Nor has the story of how Maggie got out. No one seems to know who her poor yellow Lab friend was, either.

In case you missed it, here is video of Maggie’s poignant vigil, as taken by the good Samaritan who set up traffic cones to protect her and phoned animal authorities to help her.