Next on The Scoop: Mastitis in Dogs — Symptoms, Diagnosis and Treatment
Dogster Tips 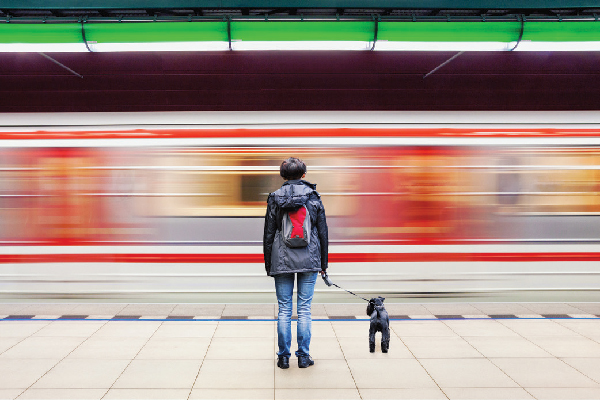 Top Tips for Living With Dogs in the City

From where and how to potty to specialized play, socialization and health precautions, here’s what pup parents need to know about having dogs in the city.

People feel badly for dogs in the city, thinking that they’re stuck in a cramped apartment all day,” says Sarah Block of Hearts & Bones Rescue in Brooklyn, New York, who lives with Django, a Border Collie/Lab mix, and Sabbie, 12, a Miniature Pinscher. She believes “That’s the wrong way to look at it. City dogs spend no more or less time inside than rural or suburban dogs do.”

That’s probably because people in big cities tend to use a dog walk to run errands and routinely take their dog along on appointments and social outings.

“In NYC, we multi-task a dog walk with going to the deli, dry cleaner, drug store and grabbing lunch or a cocktail at the corner pub,” says Dawn Deisler, a clothing designer from Brooklyn, New York, who lives with Garçon, 2, a Toy Schnauzer. “It’s common to see a dog just about anywhere in NYC. I make Garçon a part of my life and lifestyle.”

Toilet training tips for dogs in the city

Where to potty is something to keep in mind when training dogs in the city. Photography ©GlobalP | Getty Images.

“One of the challenges that emerged when I moved to NYC is having a dog that doesn’t love ‘going’ on the sidewalk,” Sarah says. “It’s not their instinct to ‘go’ on the concrete, and it took my dogs a while to adjust.”

Housetraining a puppy is more difficult in the city if you don’t live in a first-floor garden apartment — and not many people do.

“I live in a high rise, and by the time the elevator comes, I get to the lobby, I politely rush through all my neighbors and doormen wanting to pet the puppy, and get out into the park … by then I may have missed the potty opportunity,” says Diana Liberto, CEO, WalkMyMind, in Philadelphia, Pennsylvania, who lives with Ziti, a 6-month-old Russell Terrier.

Separation anxiety for dogs in the city

Separation anxiety isn’t any more of an issue for dogs in the city as it is for their rural cousins, but it does pose more of a problem when one of the manifestations is chronic barking.

Tip: Urban neighbors tend to be in earshot of anxious dogs and alarm barkers, so keeping your dog calm using positive reinforcement training, running white noise machines or taking him to doggie daycare is essential to keeping the peace. “There’s a dog in my building whose barking is heard along the entire line through the bathroom vent,” says Erin B. Weissman of New York, New York, who lives with Walker, 6, a Pit mix. “We think we know which dog it is but haven’t been able to confirm.”

Playing for dogs in the city

Many city apartments have uncarpeted floors, so a dog playing with hard toys will likely result in a complaint from downstairs neighbors.

Socialization for dogs in the city

Socialization is a strong point for dogs in the city, according to Lisa Hartman, a dog trainer in the Hamptons, New York, and South Florida.

“Passing many people and dogs on busy streets and sharing elevators and building entrances are a daily occurrence for city dogs,” Lisa says. “City dogs are not lacking in stimuli: sounds, people with purple hair, elevators, trucks and so on. They usually end up acting like jaded New Yorkers — they’ve seen it all.”

Health concerns for dogs in the city

Rover.com’s Veterinary Health Expert, Dr. Gary Richter, says that since dogs in the city are likely to spend more time indoors, they may have a greater tendency to be overweight.

“Obesity is perhaps the most problematic medical issue for a city dog,” Dr. Richter says. “The lack of exercise can lead to arthritis or other orthopedic issues, chronic inflammatory diseases and even potentially cancer.” Marty Goldstein, DVM, author of The Nature of Animal Healing, medical director of the Smith Ridge Veterinary Center and founder of Dr. Marty, from South Salem, New York, says that poorer air quality, especially from automobile exhaust, can lead to more respiratory conditions and overall poorer health as a result of generalized toxicity.

“Less space and more confinement can lead to a higher incidence of communicable diseases especially when the only form of exercise for them are dog parks,” Dr. Goldstein says.

Cities aren’t known for their abundant wildlife, but they’re teeming with rats, pigeons and even raccoons, which all can carry disease.

“City wildlife can spread Leptospira bacteria in their urine, and dogs can become infected by drinking from puddles or pools of standing water,” says Dr. Ann Hohenhaus, staff doctor at NYC’s Animal Medical Center in Manhattan, New York. “Unfortunately, rats are commonplace around NYC streets and parks, and highly toxic pesticides are used to control
these vermin. If ingested, it could prove to be fatal.” According to Embrace Pet Insurance, the top five medical claims in NYC are:

Safety tips for dogs in the city In cities, it’s not uncommon for dogs to injure themselves falling out of windows or off balconies. Use window screens, and keep balcony railings high. Photography ©ablokhin | Getty Images.

Dr. Hohenhaus says that dogs in the city do fall out of windows and off balconies, so owners should use window screens. She warns never to drop the leash in an elevator — it could get caught in the closing door and become a noose. She also has a “five second rule” for summer sidewalks.

“If the pavement is too hot to hold your hand on for five seconds, then it’s too hot for your dog to walk on,” she says. “If you can’t avoid hot pavement, consider getting your dog a pair of booties or even a stroller.”

Dogs darting into the street and getting hit by cars is also a city hazard. It can happen to even the most conscientious of owners.

“Batman hates horses, and one day we were right outside of Central Park, and I had a loose grip on her leash,” says Abbie Sheridan of New York, New York, who lives with Batman, 4, a Chihuahua-terrier mix. “Batman saw one of the horses from the horse and carriages that roam the area, pulled away from me and ran right up to the horse’s hoof and was barking at it. I screamed and ran into oncoming traffic to grab her — luckily she was fine, but we both got a good scare from it!”

Grooming issues for dogs in the city

White dogs can look dirty fast in the city! Photography by GLOBALP/ISTOCK.

Cleanliness is a constant issue for dogs in the city. Light-colored dogs begin to look dirty even a few days after a bath. Dogs walk in chemicals or dirty puddles and lick their paws — and then want to jump into bed with you.

“Suburban and rural dogs roll on fresh grass, and this naturally cleans the coat and helps to distribute natural oils — like getting a chlorophyll wrap at a swanky spa,” says Jorge Bendersky, celebrity dog stylist, author of DIY Dog Grooming, From Puppy Cuts to Best in Show, from New York, New York. “City dogs try to clean their body on your sofa or your bed, the reason why it’s wise to give your dog a quick brushout or wipe down after a walk.”

“In the winter, dogs get mats in their paws from the snow and ice,” says Cindy Gatto, a groomer in Brooklyn, New York. “There’s also the problem of the salt on the streets, too, but even in the warmer months, paw care is important because paws can become dry and irritated from hot sidewalks.”

Top challenges for dogs in the city

In the city, you have to walk the dog, no matter the weather, in order to get exercise. City dogs encounter salt and many other not-so-dog-friendly items on the sidewalks. Photography ©Cebas | Getty Images

“The biggest challenge about having a dog in NYC is that you have to walk them no matter what the weather is like outside,” Sarah says. “It can be 5 degrees below zero, and you still have to bundle up for the evening walk. Or worse, when your dog wakes you in the middle of the night with an upset stomach, and it’s pouring. During Hurricane Sandy, I had to walk my dogs and was nervous about the wind and rain.”

Traveling around a city with a dog isn’t easy if you don’t have a car, and many city dwellers forgo their own wheels for public transportation. “Traveling with Wraggles around NYC as he got bigger became a challenge,” says Rachael Leukart, formerly of Williamsburg, Brooklyn, New York, who lives with Wraggles, 2, a Bernedoodle. “Because large dogs aren’t supposed to be on the subway, we had to travel with Wraggles by car. Taxis often passed us by, so it usually took us two to three times the time it would to travel with Wraggles than if we were traveling alone.”

The good news for city dog owners is that ride hailing services are popping up, like SpotOn.pet in NYC, which is like Uber for dogs and their owners. Their drivers are trained and equipped to travel with dogs — they even seatbelt them in for safety.

Advantages for dogs in the city

City dogs are welcome in many restaurants and other businesses. Photography ©dusanpetkovic | Getty Images.

Dogs in the city have the advantage of some of the best veterinary hospitals in the country. They are welcome in a surprising number of businesses and restaurants, and they can socialize with many more dogs and people than a rural dog could ever dream of meeting.

“I have a large circle of dog friends in the city, and honestly, I don’t even have the time to go to all of the events and meet ups,” Dawn says. “There is a huge community that has events and parties for dog rescue and charity fundraising. You could go to at least two events every weekend the entire year.”

The best aspect of having a dog in the city is that it makes life more pleasurable and worthwhile, according to Kimberly Phan, a social media marketing specialist in New York, New York, who lives with Kleo, 5, a Yorkie-Silky mix. “Although NYC is filled with tons of people, the city can make you feel lonely. There’s nothing better than coming home after work to a dog who wags her tail at the first sight of you.”

The scoop on poop for dogs in the city

Rover.com surveyed thousands of dog walkers on its site and uncovered the dirt on urban dog doodie. Here are some remarkable stats:

Top 10 cities with the most poop:

Both Los Angeles and New York dogs are early risers and are most likely to poop at 5 a.m. Overall, 7 a.m. is the most popular time when dogs poop.

The biggest poopers on Rover:

Nikki Moustaki is a dog trainer, dog rescuer and pet expert. She splits her time between New York City and Miami Beach, Florida, and is the author of the memoir The Bird Market of Paris. Visit her on Facebook, on Twitter @nikkimoustaki and at nikkimoustaki.com.