Ever See a Grown Man Cry? Tell Him He Has to Give Up a Beloved Dog to an Accused Animal Hoarder

A Kentucky woman charged with 200 counts of animal cruelty for hoarding hundreds of animals in deplorable conditions is jockeying to get back a couple of her favorite dogs and horses.

But at least one of those dogs won’t be given up without a huge fight by her foster family.

Here’s a photo of the mobile home where Terri Smith is accused of having kept hundreds of animals, both inside and outside. Apparently some of them were in as bad a condition as the mobile home. 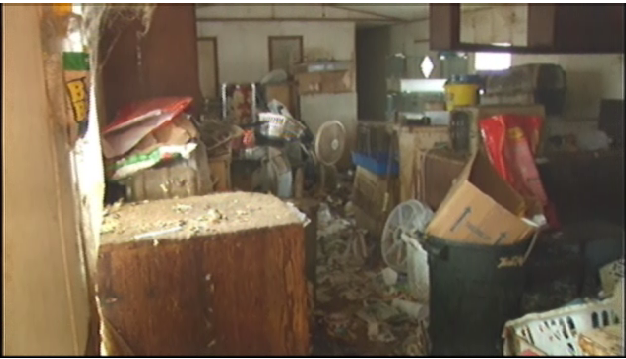 Luckily most of the animals found good foster homes when they were taken away a few months ago. And the beautiful spaniel in the photo below went to a fantastic home. Steve and Jodie Judy and their family fell in love with her, named her Moto (after their favorite sport of motocross), and took her everywhere with them.

“I love her as much as I love my own kids,” Steve Judy said in a report on WDRB-TV. When the family heard that Smith, who pleaded guilty to one charge (you read right — one out of more than 200), wanted a couple of dogs and horses back, they prayed Moto would not be one of them. But they got the dreaded phone call while shopping, and Jodie burst out crying in the store.

Steve Judy, as you can see in this photo, has a hard time talking about this without breaking down himself.

“She cannot go back to that lifestyle,” he says. And he tells his dog while petting her with clear adoration. “It’s okay, I promise, Daddy ain’t going to let you go nowhere.”

Smith is scheduled to be sentenced in court today for her one count of cruelty. The Judys will be right there to fight any official requests from Smith. If all goes well, they could adopt Moto once the case is settled. If things go badly … let’s not go there just yet. It’s too sad to think about.

Check out this video, which was shot while Steve and Jodie and their three sons and two dogs were in the RV they travel in for motocross competitions. And if you happen to live near Henry County, Kentucky, and feel like heading to a courthouse today, the family could probably use a little moral support.