Next on The Scoop: Girl Dog Names: A Wealth of Cute and Unique Choices
Ask a Vet

Ask an Emergency Vet: What Is It Like to Work on Christmas?

Christmas is a time of cheer and joy, but at the veterinary emergency clinic, the holiday has a slightly different tone.

Remember as a kid the excitement that built up around Halloween? That excitement, for me, was not simply about the costumes and trick-or-treating. Halloween was the start of something big. After Halloween came Thanksgiving, which meant several days off from school. And the arrival of Thanksgiving meant something even bigger, because soon after Thanksgiving came the mother of all holidays: Christmas. Presents! More than a week off school! My reverie ended precisely on January 2, when it was time to go back to school and face the music of the Idaho winter.

Some things sure do change with time. Now I work as an emergency vet; by definition, my schedule is nights, weekends, and holidays. I still love holidays in principle, but in practice they can be a bit rough.

Halloween marks the start of canine chocolate season. Thanksgiving marks the start of pancreatitis season. Christmas remains the mother of all holidays — but for the last several years that means that Christmas has been the high-water mark of the stress season for me. While friends and family sipped egg nog and enjoyed holiday cheer, I endured overwhelming caseloads and all-nighters at work. And January 2? It is now the day of redemption. Living to see January 2 means that I have survived another holiday season. Everyone else goes back to work, and I go to bed. 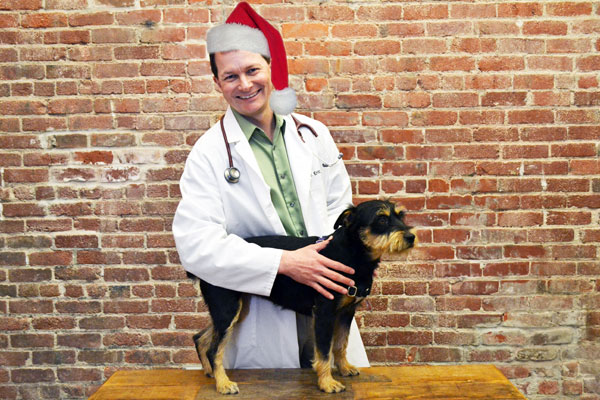 So what exactly goes down on Christmas at the emergency hospital? Last year the folks at Dogster asked me to write about it. I just wanted to put it behind me at the time. But I saved my notes.

At any time there were several dogs in the hospital under treatment for chocolate ingestion. The most common source was wrapped chocolate from well-meaning friends. The chocolate ended up under the tree, and the dogs sniffed it out and helped themselves. Last year I found that Labrador Retrievers were especial chocoholics, and there was a noteworthy proclivity among chocolate Labs. When a chocolate Lab consumes chocolate we dub them “double chocolate Labs.” We then induce vomiting, at which point they become “chocolate volcanoes.”

A lot of childrens’ toys require batteries. A lot of batteries therefore wind up under trees. Why do dogs like to chew on batteries? I can’t answer that, but I can say that batteries are among the worst chew toys imaginable. The acid in batteries causes damage and ulceration of the mouth and intestines, and the batteries themselves can cause intestinal obstruction when swallowed.

Last year I warned that tinsel poses a special risk to cats. They are attracted to it and they are prone to swallowing it; it can subsequently lead to intestinal obstruction. Never to be outdone in silliness, last year one dog really stepped it up. He chowed down on the tree’s tinsel and wound up on the receiving end of an endoscope on Christmas Eve.

Dogs, unlike humans, don’t often pick Christmas dinner as a time to come out or bring up grudges from puppyhood. However, the special treats, new people in the house, and exciting environment of the holidays can trigger competition between dogs. Emotions can run high. Sometimes this combination can devolve into outright internecine fighting.

Last Christmas Eve I spent over an hour sewing up one dog involved in such a fight. When he awoke, he gave me a look that seemed to say, “If you think this is bad, you should see the other guy.” Indeed, I did see the other guy. I spent an hour and a half sewing him back together next.

Nope. I’m happy to say that in my experience this phenomenon is a myth. Over the last several years of working Christmas and the surrounding nights, I have not noticed any spike in euthanasias.

This was the really hard part about last Christmas: The cases just kept coming in. The work never seemed to end. Last year I worked five nights in a row, ending on December 26. Every night was busy, and everyone was simply worn out. Christmas, as a client once put it, was “ruff.” But January eventually came.

Happy holidays to all. I hope it’s not necessary for me to see you and your pet this Christmas.

Read about more hazards for dogs: