Next on The Scoop: Changing Lives With ‘My Big Fat Pet Makeover’ Host Travis Brorsen 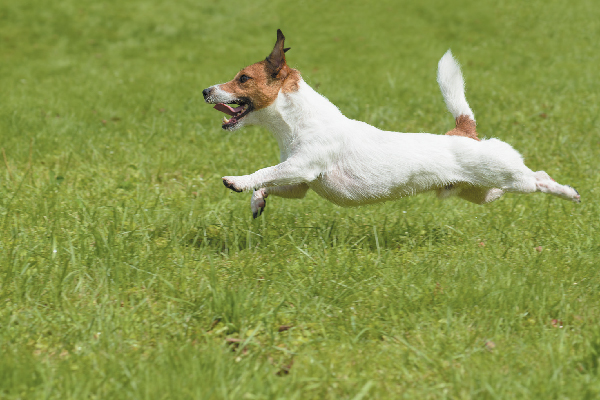 The Russell Terrier, a high-energy, exuberant breed, lives life at full throttle and takes guff from no one. He’s smart, endearing and often exhausting.

Bred in England in the mid-1800s, the breed is named after the Reverend John Russell, who was an enthusiastic hunter. One of his first breeding terriers, Trump, was allegedly bought from his milkman. Known as the “Sporting Parson,” he bred feisty and bold fox hunting dogs. The terrier’s job was to run with hunters and their hounds, then flush the fox out when he went underground. In time, some of these terriers were carried on the hunter’s (or his assistant’s) saddle. The dog would be released from his pouch quickly if a fox went to ground. The Russell’s compact, agile body allowed him to maneuver easily underground. Russell Terriers are adept at learning tricks, but do take a lot of training. Photography ©Fran Gaglione | Getty Images.

Today’s Russell Terrier maintains his tenacious spirit and boundless energy that made him a model fox hunting dog. High spirited and assertive, the Russell isn’t suited for a laid-back, “who bothers with walking or training a dog much?” family. He’s bright and bold, thriving on many sports. But while he flourishes with companionship, he often shows an independent spirit. “What do you mean Sit, Stay? I’m off to chase some squirrels!”

Training a Russell for obedience takes patience. Don’t let Hollywood’s depictions deceive you. The breed learns tricks easily, but he’s not known for predictable compliance. In fact, Moose, the Russell that worked on the long-running Frasier TV comedy, became a star only after his first family couldn’t handle him and sent him off to a trainer.

A Russell has the flexibility and speed for the agility course, but you’ll need to convince him it’s a worthwhile activity. He’ll likely deem barn hunts and earthdog trials as time well-spent. After all, he was bred to follow his quarry’s scent, so these sports feel natural. He may also excel in flyball or backyard ball chasing.

Without outlets for his intensity, energy and hunting drive, he may dig up trouble in the yard, quite literally. And speaking of yards, prospective owners will need to fence their yard securely: Russells are known for following a good scent well off their property. They are also often untrustworthy off leash. Their hunting drive, once kicked into gear, generally trumps an owner’s requests.

Life With a Russell The Russell Terrier may try to boss other dogs around. Photography ©Antonio Morelli/EyeEm | Getty Images.

Even indoors, the Russell is a lively dog. He can live in an apartment only if his family is committed to his regular exercise. Out and about, his fearlessness may lead to problems; he may try to boss other dogs around, regardless of their size. And given his prey drive, a Russell should be closely supervised around cats and other small animals. Ever playful, a Russell can be a good playmate for older, respectful children. How did the two distinct dogs come to be?

The American Russell Terrier Club was established in 1995 as a registry to keep the Russell and Parson Russell separate in both bloodlines and appearance.

Originally an attorney, Lynn Hayner writes about dogs and law, in no particular order! Lynn lives in Waco, Texas, with her family, a rescued cat, and her new German Shepherd Dog, Anja.

8 comments on “Facts About the Dynamic Russell Terrier Dog Breed”