Next on The Scoop: What’s Really on My Dog’s Mind?
Health & Care 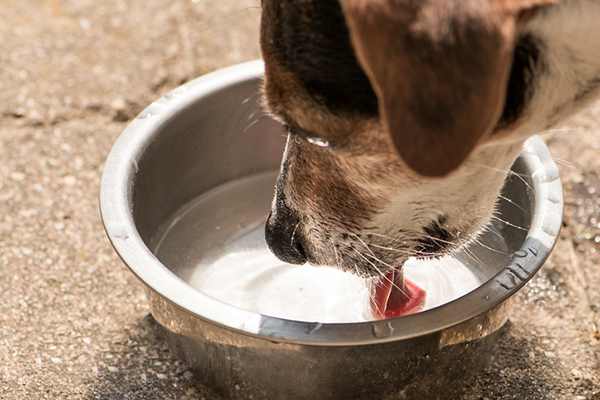 Why Does My Dog Cough After Drinking Water?

If your dog coughs after drinking water, let's examine three potential health issues that could be at play and what to do about each.

Few sights are as hypnotic as watching a dog’s tongue curl as he laps water from his favorite dish.

Naturally, like any of us, sometimes our dogs drink too fast or they are temporarily distracted, and a few drops go down the wrong way. You’ve started noticing a disturbing trend, though. It seems that every time your dog pauses for a bit of liquid refreshment, the action is followed immediately by the sounds of coughing and gagging. If a dog coughs after drinking water consistently, there may be more to it than rapid or reckless swallowing can explain away.

Related: How Much Water Should a Dog Drink a Day?

At least three medical issues might be the reason a dog coughs after drinking water, all of them involving the trachea:

Each of these conditions can affect any dog, but there are notable differences and distinctions that we can draw between them to determine what course of action a veterinarian may take to alleviate a dog’s suffering. Age, breed, size and associated symptoms are all significant factors. 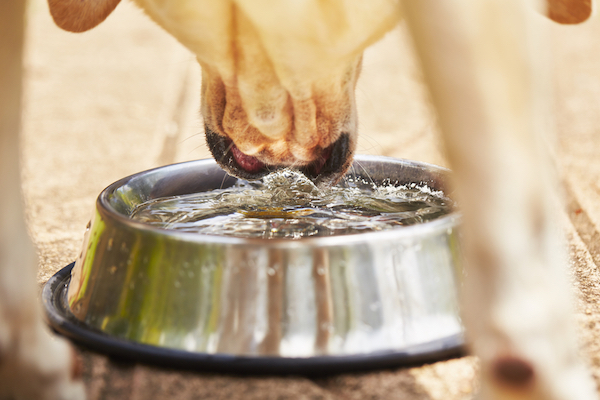 If your dog coughs after drinking water, trachea issues might be at play. Photography by Jaromir Chalabala / Shutterstock.

First, where is the trachea? What does it do?

The trachea, or windpipe, is a tube composed of cartilage, muscle and tissue, located between the throat and the lungs. Through it, air passes from the nose or mouth into and out of the lungs. It shares its entry point into the body with the esophagus. A small flap called the epiglottis closes when food or water enters, leading it toward the digestive tract, and opens for breathing. When the trachea’s structural integrity is compromised, so too is its functionality.

Whether the trouble is irritation and swelling during respiratory illnesses, a fault present from a young age due to genetic abnormalities, or one which develops with advancing age, a weak trachea prevents dogs from getting the oxygen they need. Since dogs sweat very little, panting provides not only fresh air but also heat relief, making the trachea critically important during the warmer parts of the year or during intense exercise.

Also known as infectious canine tracheobronchitis, kennel cough in dogs is the least serious reason why a dog coughs after drinking water. Kennel cough is basically the common cold for canines. Like any communicable disease, it spreads most efficiently in places where there are a number of dogs in close quarters. From the dog park to the groomer, and from boarding facilities to veterinarians’ offices, kennel cough can affect any breed of dog at any age.

The major symptom of this mild respiratory infection is a cough that sounds like a goose honking. The more the dog coughs, the more irritated and inflamed the trachea becomes. In a multi-pet household, a dog with kennel cough should be isolated from other dogs and their bowls cleaned and disinfected. Kennel cough tends to pass within a couple of weeks, and any coughing with it.

If a dog coughs after drinking water, especially if that dog is a young puppy, it could signal a more serious health issue. A hypoplastic trachea is a genetic abnormality. “Hypoplastic” means “underdeveloped,” and usually refers to the rings of cartilage that give the trachea its shape. The effect of this inherited condition is that the windpipe does not develop to its full size or width. This disorder primarily affects puppies from short-muzzled breeds, technically referred to as “brachycephalic.”

Breeds most at risk for hypoplastic trachea include the Boston Terrier, English Bulldog and Pug. Symptoms depend on the extent to which the puppy’s airway is narrowed by the condition. These dogs are already known, as they age, to snore, snort or breathe more heavily; with a hypoplastic trachea, symptoms like these can begin showing up as early as five or six months of age. Additional symptoms to watch out for in flat-faced puppies include low energy, along with rapid weight gain due to limited ability to exercise.

On its own, a mild case, where the trachea’s diameter is not substantially affected, may pass completely unnoticed and undiagnosed. In some dogs, the narrow trachea can be a symptom of brachycephalic airway syndrome, in which the abbreviated length of the dog’s skull causes other cranial abnormalities, such as smaller nostrils, which further restrict a dog’s oxygen intake.

Where evidence of an underdeveloped trachea tends to arise quite early in life, symptoms of a collapsing trachea have a much later onset and tend to affect a different subset of dogs. This is a degenerative condition in which the trachea loses structural integrity over time. Imagine slowly flattening a roll of toilet paper and you have a decent image of what happens to the dog’s windpipe. As the airway narrows, it becomes progressively more difficult for the dog to take in sufficient air.

Symptoms of a collapsing trachea tend to appear in middle age or seniority, which for these long-lived small dog breeds may be anywhere from the ages of 4-6 years or later. Similar to kennel cough and hypoplastic tracheas, the hallmark of this disorder is that honking cough, accompanied by a gagging noise. For small dogs who have been energetic and perky throughout life, a loss of energy or getting tired after very little exertion may be more alarming signs of a weakening trachea.

Anything with the word “collapse” or “collapsing” in it sounds dire, but in many cases, this is a very slowly developing health issue. It is most frequently seen in Yorkshire Terriers, but it is common across a range of small and toy dog breeds. Along with Yorkies, tracheal collapse can also affect Chihuahuas, Lhasa Apsos, Pomeranians, Toy Poodles and Pugs.

Management of tracheal abnormalities in dogs

So, if your dog coughs after drinking water, don’t panic. Kennel cough tends to last only a couple of weeks. If the dog is a short-muzzled puppy or an older small or toy breed, it is worth consulting a veterinarian about the possibility of a hypoplastic or collapsed trachea. Depending on how narrow the puppy’s windpipe is and the rate at which it is collapsing, afflicted dogs may be able to live out their normal lives with very few alterations.

Excess weight or obesity puts additional strain on oxygen intake, so it is crucial to reduce that strain by not overfeeding at-risk dogs. Dogs with leashes attached to their collars, especially ones who tug on their leashes, may benefit from switching to a harness to limit unintentional wear and tear on their neck and throat. In cases where tracheal collapse is severe, management can be more costly and may involve either medication to manage symptoms or surgery to reinforce the trachea.

Read Next: What Type of Water Alternatives Can Dogs Have?

59 comments on “Why Does My Dog Cough After Drinking Water?”