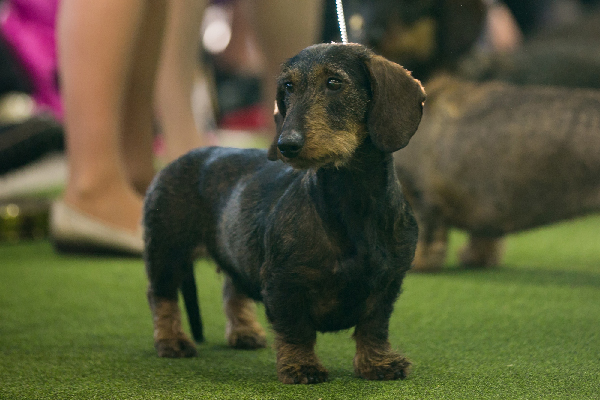 The Wirehaired Dachshund is energetic, clever and sometimes fiery.

The Look of a Wirehaired Dachshund

The Wirehaired Dachshund has a long, low, muscular frame covered in a short, hard outer coat and a soft undercoat. It comes in a wide range of colors including black & tan, dark gray and various shades of red. Its long head is erect and alert with low-hanging ears and a pair of happy oval eyes. Its neck slopes down to a protruding chest, and its tapered tail is covered in thick hair. Overall, the Wirehaired Dachshund manages to appear balanced in spite of its squat frame.

The Wirehaired Dachshund is energetic, clever and sometimes fiery. His big personality combined with his intelligence and vigorousness can make him a real pint-sized powerhouse. Unlike other Dachshunds, the Wirehaired Dachshund is known for being rather friendly and outgoing with new people. But it can still be protective and it loves to bark, making it an extremely handy—and compact—watchdog.

The Wirehaired Dachshund loves the outdoors. It has a great nose, a durable frame and an intense curiosity. It loves to chase small animals, dig holes and play games with family members. They are also proud and bold. With plenty of attention and socialization, they will shine on everyone with a lovable and loyal disposition.

The Wirehaired Dachshund will be happiest with a decent-sized yard, but it will also be perfectly content in an apartment. Either way, make sure it gets a daily walk and plenty of attention—or else it can get slightly ornery and possibly destructive.

A healthy Wirehaired Dachshund can live as long as 16 years. Common health issues include diabetes and heart problems. Due to its long spine and short rib cage, it can be prone to back problems. For this reason, remember to hold the Wirehaired Dachshund properly, supporting its full frame. (Warning: You’ll find most don’t like being picked up). Also, be sure to watch their food intake: Dachshunds can gain weight quickly, causing more back problems and other issues.

The Dachshund—coming from the German dach, which means “badger,” and hund, which means “dog”—is a very old breed, dating back hundreds of years. Used widely in Germany for hunting, its short, sleek frame allowed it to track animals into all sorts of nooks and crannies. The Wirehaired Dachshund first appeared in the late 19th century, following the smooth and long-coated versions.