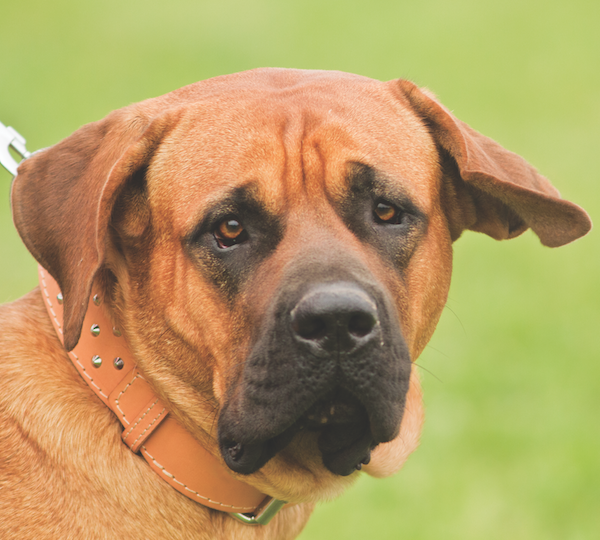 Sensitive and understanding, the Tosa is a loving, loyal household companion.

The Look of a Tosa

The Tosa has a large, muscular, Mastiff-like frame covered in a short, dense, red coat (though it can sometimes be found in yellow, black, black & tan, brindle and fawn). Its large, broad head has a square muzzle, small hanging ears, almond-shaped eyes and sometimes a wrinkled brow. The Tosa’s powerful neck has a dewlap. Its strong back leads to a thick, tapered tail than hangs low.

The Tosa is a loving, loyal household companion. Sensitive and understanding, this dog can sometimes anticipate its master’s wishes. It is relaxed around the house, resting on couches or beds during lazy afternoons. A romp through the back yard or a solid walk through the neighborhood will be plenty of exercise for this dog.

Based on just its size and resounding bark, the Tosa makes an impressive watchdog. However, it can be remarkably restrained around strangers—this dog is confident and calm, not out to prove anything. The Tosa is known to be gentle and patient with children.

The Tosa needs proper training and socialization from an early age, but simply because it is such a large and powerful canine. Warm and composed with family, it can be slightly reserved around strangers.

The Tosa can live as long as 12 years. Common health issues include hip/elbow dysplasia and eye problems. Because it is prone to bloat, feed him smaller meals throughout the day as opposed to one big meal. It is easy to groom, needing only the occasional brushing to keep its coat looking fine. The Tosa tends to drool a little, but not excessively.

Developed in 19th century Japan, the Tosa (also called the Tosa Inu and the Japanese Mastiff) derived from a cross between the large, Spitz-like Shikoku dogs of Japan and several large European breeds including the Mastiff and the Bulldog. Still used as a guard dog, watchdog and family companion around the world, in Japan the Tosa is considered a proud part of the country’s heritage.