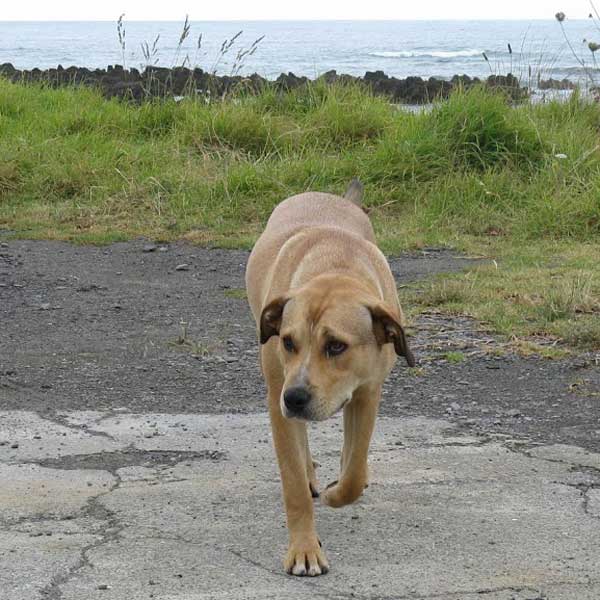 Loving, affectionate dogs, Satos are good with all family members.

The Look of a Sato

Satos vary in looks quite a bit but share some common characteristics. They tend to be small to medium-sized, with slightly folded ears and a thick, short coat.

The most common Sato variety looks like a small Terrier/Pointer mix with a thin, agile frame; long snout; and often a sickle tail. Many are almost foxlike.

Satos (pronounced with a short A) are a type of dog rather than a breed. The name is Puerto Rican slang for “street dog,” but they are also known as Puerto Rican Found Dogs in the U.S.

They are the homeless dogs, or urban free-ranging dogs, that live in Puerto Rican cities. They are different from regular strays in that they have limited territory, and many have consistent contact with humans. What is surprising is that these neglected, sometimes abused dogs make very good family pets.

Living with a Sato often means an element of surprise, but they are almost always loving, affectionate dogs who are good with all family members. They need moderate exercise (some Satos will try to never leave the couch) and minimal grooming.

Because a Sato has spent time on the streets and then likely in a shelter, it may take a while for it to adjust to suburban or city life. Understandably, they can be nervous at first, but responsible and thoughtful owners can make their dogs feel at home with patience and training.

A Sato’s temperament depends on its background; a severely abused Sato will likely be shy and perhaps aggressive, while one that was taken care of by locals may be calmer and already half-domesticated.

Sato shelters such as Save a Sato (www.saveasato.org) do temperament tests before the dogs are made available for adoption. Save a Sato also works with individuals who want to bring one back from Puerto Rico.

Other rescue groups include Second Chance Sato Rescue (www.scsr.petfinder.com) and Stray from the Heart (www.strayfromtheheart.org)

Homeless Satos encounter many health issues including rabies, parasites, and mange. Once these problems are tended to, they tend to be healthy dogs. However, it’s best to check a potential adoptee’s health records.

Satos have existed as long as Puerto Rico has. These are the ancestors of working and hunting dogs that were brought to the island.

Today, Satos are rescued mostly by shelters in southern U.S. states because of their proximity to Puerto Rico, but are then often sent to Northeast rescues because of the overcrowding in Southern shelters. Satos are gaining popularity as family pets throughout the U.S.