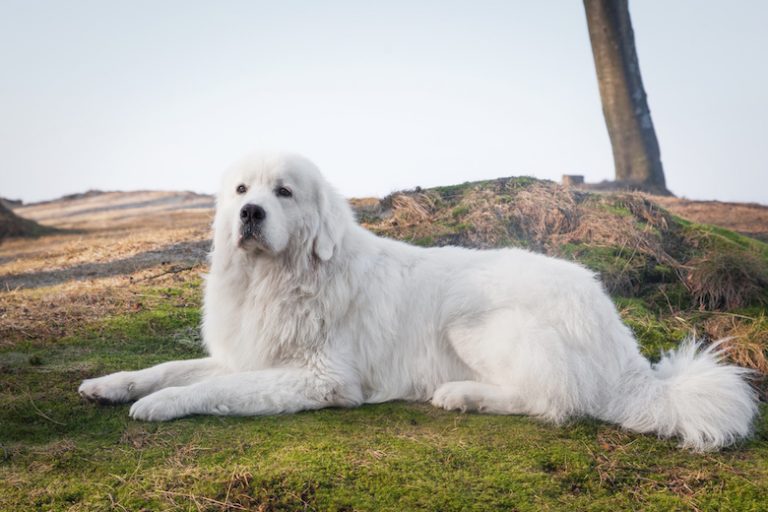 Polish Tatra Sheepdogs were bred to spend most of their time without human contact so they can appear aloof and staid.

The Look of a Polish Tatra Sheepdog

The Polish Tatra Sheepdog is a rare breed in several ways. Its pristine, pure white fur has a heavy, dense undercoat covered by a heavier, rough outer coat that was developed to protect it from the elements, including the extreme cold.

These sheepdogs can often top 130 pounds. Their deep-set dark eyes are a stark contrast with their white fur, as are their black noses and lips. Their ears lie flat against their skulls and almost seem too small for this magnificent beast.

Because Polish Tatra Sheepdogs were bred to guard large herds of sheep and spend most of their time without human contact, they can appear aloof and staid, which can be ideal if you want a guard dog or little interaction with your pooch. Those dogs who come from a longer line of companion Tatras are much more family-oriented and interactive. These dogs need very long walks at least once a day.

The Polish Tatra Sheepdog has a self-cleaning coat that developed because of its long periods away from humans. They shed mountains of beautiful white fur in the spring and must be brushed regularly during that time. Another big plus is that this dog does not drool like many other giant breeds.

The Polish Tatra Sheepdog was bred to be a guardian of flocks and was given very large territories to guard, so it has a tendency to pace and get very antsy in smaller places. It’s best to have a large fenced-in yard where it will likely spend most of its time.

Because of its size, the Polish Tatra Sheepdog is prone to hip dysphasia, so slow exercise is helpful. They may also experience bloat (which can be avoided by the use of raised feeders), epilepsy, and patellar luxation.

The Polish Tatra Sheepdog is named for its ancestral homeland in the Tatra Mountains in southern Poland. It is also known as the Owczarek Podhalanski and the Polish Mountain Sheepdog.

Polish Tatra Sheepdogs have been extremely useful for the mountain folk of South Poland. Their plumed tails were good to hold on to when human and dog were traversing rough terrain, and their unusual fur could be spun like wool.

Thanks to the breed’s intelligence and work ethic, this dog’s numbers rebounded after World War II, when they nearly died out because of starvation. Today, these dogs are often used in the Tatra Mountains as guardians. Some have become purely companion dogs, though the desire to work is never bred out of them.