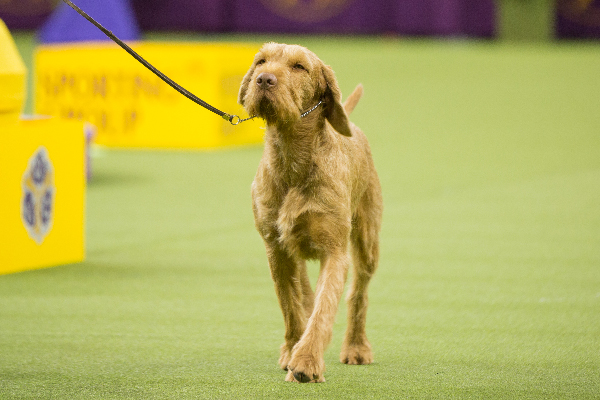 The Hungarian Wirehaired Vizsla is a highly alert and energetic dog, that needs a large amount of exercise.

The Look of a Hungarian Wirehaired Vizsla

The Hungarian Wirehaired Vizsla has the face of a rascal, scruffy and lovable at once. To add to their hobolike look, most of these dogs sport trademark mustaches. Their ears hang down and they have soulful, ochre-colored eyes. Their golden rust coat is wiry to protect them from the elements and is stiff to the touch.

This is a lean and strong breed, with a slightly elongated body and longish legs. Their gait is graceful, and they can cover much ground in a fast gallop. They carry themselves with dignity, giving the appearance of a muscular antelope in a dog’s body.

Both working and companion Hungarian Wirehaired Vizslas lead enthusiastic, fast-paced lifestyles and are always ready to go somewhere. They make great family dogs, and are very good with children who are old enough to withstand their antics. In general, these are loving and gentle dogs who are wonderful to live with as long as they are kept active.

This dog loves to play and do sports such as agility and tracking. Because of its hunting background, it is best to keep it away from any small household pets such as hamsters.

Hungarian Wirehaired Vizslas shed an average amount and need to be groomed with a brush made for their wiry hair. 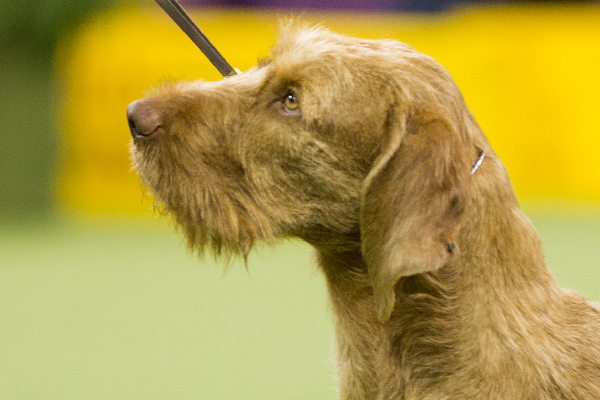 The Hungarian Wirehaired Vizsla is a highly alert and energetic dog, so you must assume the responsibility of a large amount of exercise. Without it, your dog will redirect its energy to something else such as the destruction of your couch.

Several health problems are common to the breed, including hip dysplasia, entropion and ectropion (eyelid disorders), and digestive issues.

The Hungarian Wirehaired Vizsla was developed in Hungary in the 1930s by breeding the Smooth-Coated Vizsla, which had an unusually thick and protective coat, with the German Wirehaired Pointer. This produced an optimum hunting dog with the grace and agility of the Vizslas and the endurance and hardiness of the Pointer. It is related to the very rare Longhaired Vizsla.

Today, the Hungarian Wirehaired Vizsla is seen mostly outside the U.S. It is still often used as a working dog, but transfers easily into households as a companion.