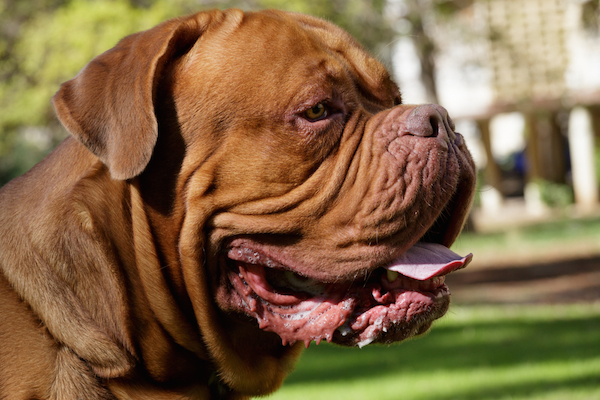 The Dogue de Bordeaux may look fearsome, but he is even-keeled and sweet with his family.

The Look of a Dogue de Bordeaux

The Dogue de Bordeaux is a short and burly version of the Mastiff. It has a large, broad head, undershot jaw, widely set eyes and a furrowed brow with a somewhat stern impression. Its slightly jowly muzzle is short with distinctive folds. The ears are small in relation to the head, and the neck is thick and rather wrinkly. The Dogue has a deep chest and a solid, broad back. Its thick tail is carried low. The Dogue has a smooth, short coat that can come in reddish brown colors with a darker mask.

The Dogue de Bordeaux may look fearsome, but he is even-keeled and sweet with his family. Appreciating ample amounts of attention and affection, the Dogue loves to curl up and be scratched and cuddled. But be sure to make room—you don’t want the heavy-duty Dogue to park itself on your lap.

On a typical day, you’ll find your Dogue snoozing on its favorite couch or bed. And it won’t be hard to locate: Just follow the snoring sounds. The Dogue may not be up for a big run in the park, but it does appreciate vigorous daily walks.

Though somewhat mellow and easygoing around the house, the Dogue can be very protective of its family and environment. It makes a very effective watchdog—often by just standing there—and knows when and how to adjust the intensity. The Dogue has a calm self-assurance in almost every situation.

The Dogue de Bordeaux is gentle around its family, but needs plenty of socialization around other animals. It has a strong sense of independence—not to mention a loyalty to family—that will benefit from fine-tuning.

Healthy Dogue de Bordeaux can live as long as 10 years. Common health issues include hip dysplasia, skin and heart problems. It is also prone to bloat, so be sure not to serve it big meals. The Dogue de Bordeaux is easy to groom, and it doesn’t shed too much.

Historians think that the Dogue de Bordeaux pre-dates both the Mastiff and Bullmastiff, but no one knows for sure. Most likely, the Dogue developed around the same time as the other Mastiffs. Bred in several different regions of France, the Dogue de Bordeaux was valued as a hunter, guard dog and companion by both the aristocracy and working class. It suffered a drop in popularity after World War II, but increased its numbers during the 1960s. With the help of Dogue de Bordeaux clubs, it continues to thrive in the U.S. and Europe.