Next on The Scoop: Facts on the Chihuahua Dog Breed
Rescue 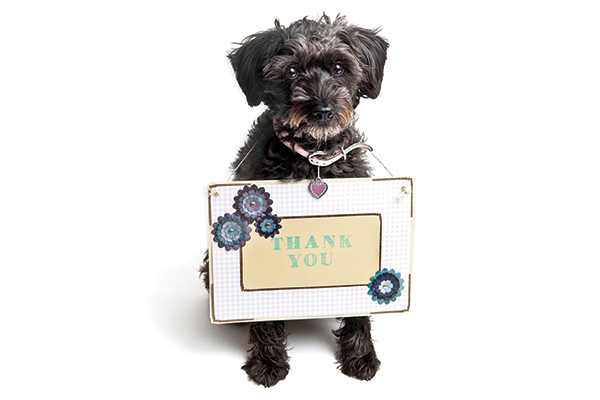 How Rescue Dogs Say “Thank You”

Here's all the ways that rescue dogs say "thank you" for all of your support and kindness.

A rescue dog can find himself suddenly sprung from his cell and moved to a place with soft beds and softer laps all in the span of 24 hours. It’s like hitting the lottery and getting released from prison all on the same day — pretty overwhelming.

It’s a lot to take in for any dog, but when the dust settles and they realize they’ve gone from shelter pet to pampered pet, they’re forever grateful to the human who busted them out of lockup.

Here are 10 ways our dogs say, “Thanks for rescuing me.”

Our dogs can’t speak, but when you look into the open mouth of a peaceful pooch who is drooling onto your freshly laundered pillow, you can hear the words as clearly as you can see the river of saliva: “I’m so thankful.”

Your dog knows you rescued him, and he’s bound and determined to rescue you from a sedentary lifestyle. He doesn’t know what magical force moved him from the shelter floor to your couch, but he knows he’s the force that’s gotta get you off it and out for a walk. With each paw step down the sidewalk, he’s saying, “I’m so grateful for this new life, and I can’t let this human get heart disease.”

The first time you saw them they were downcast and forlorn, and now those bright puppy eyes light up when you walk in the front door and get even bigger when you walk into the kitchen. You might mistake this for begging, but it’s really gratitude. Nobody ever dropped food at the shelter, and your dog is so grateful to be adopted by someone as clumsy as you.

4.By detailing your car

Your dog will never forget his first ride in your car; the one that took him away from the shelter and to his cushy new home. That’s why he makes sure to clean up your car each time he climbs in. He proves his gratitude by vacuuming up every dropped french fry his nose can find.

5.By protecting the castle

When you go from sleeping in a concrete cell to sleeping on a California King, there’s really only one explanation: “I’ve been adopted by royalty,” your dog decides. And to show his gratitude, he vows to alert you to any intruder attempts. Those Amazon boxes could contain a Trojan horse, and by barking to warn you of this threat he is saying, “I’m so thankful to be a royal pet.”

You get out of the shower and before you can even pull on a towel your thankful pooch is licking every drop of water off your legs. With each lick, he’s saying: “Let me dry your legs the way you dried my sad eyes.”

Speaking of the bathroom, you may not love how your dog follows you into the bathroom every time you go, but he’s not trying to make you uncomfortable, he’s trying to keep you company. He’s thankful that you do it for him, after all.

8.By warming up the bedding

Your dog doesn’t want you to have to get into a cold bed like the one he used to lie in at the shelter, so he does his best to be first into the bed each night, to fill it with the warmth of gratitude (and a little dog hair).

A rescue pooch is so grateful to have a home and that’s why many are diligent about not peeing in it. Every time you’re out for a walk and your rescued pooch makes eye contact with you while peeing on a lamppost he’s trying to say, “This pee is for you, friend.”

10.By returning the favor

It’s hard to imagine how unloved dogs must feel when they’re surrounded by concrete and chain link but for those of us who have rescue dogs, it’s not hard to see how hard they work at returning the love we give.

Heather Marcoux is a freelance writer whose two rescue dogs, GhostBuster and Marshmallow, are super thankful they got adopted by someone who is constantly dropping food. @Heather_Marcoux has also adopted an Instagram account, and the dogs have one, too, as the@ghostpets.

9 comments on “How Rescue Dogs Say “Thank You””