Next on The Scoop: In One Touching Video, An Alzheimer’s Patient Speaks Again — To the Family Dog

What Do You Do During a Tornado When Your Dog Is Barred from the Storm Shelter?

Many pet owners find out too late that their emergency shelters don't allow pets. What would you do if it happened to you?

Picture it: A tornado is bearing down on your neighborhood, so you grab your dog and head to the nearest public storm shelter — City Hall, let’s say. Once you get there, a police officer allows you in, but steps in front of your dog. No pets allowed. You have a choice. The storm is right on top of you, and the cop isn’t budging. What do you do? 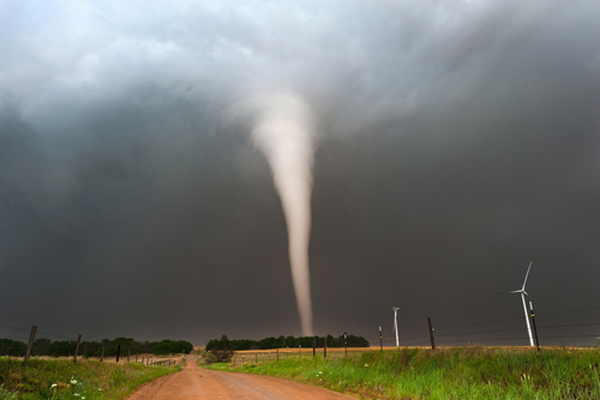 That exact scenario happened to Jerry Starr and Tobi, his Shih Tzu–Yorkie mix, last May, when a twister slammed into his suburban neighborhood outside Oklahoma City, OK, and he found his dog barred from the shelter at City Hall. For Starr, it was an easy decision, according to the AP. He rode out the storm in his car, one of the most dangerous places to be.

“I love her and there’s no way I was going to live knowing I was abandoning her,” said Starr.

After last year’s deadly tornado season in Oklahoma, with 79 tornadoes that killed 34 people, the issue of what to do with pets in storm shelters is front and center as this year’s season gets off to a deadly start.

“Pets and sheltering is always a problem,” said David Grizzle, emergency management coordinator for Norman, OK, which ended up closing its public shelters because of overcrowding and pets. “Pets come in and sometimes they’re hard to control.”

He talks of harrowing scenes with frantic dogs packed closely together — along with snakes, chickens and even reptiles. During one incident, a family was asked to put their dogs outside to make room for more people.

“The adults actually got into fights over that decision, and trying to boil down the priority of who should be inside a facility during a storm: a pet or a person. It’s a constant fight,” Grizzle said. 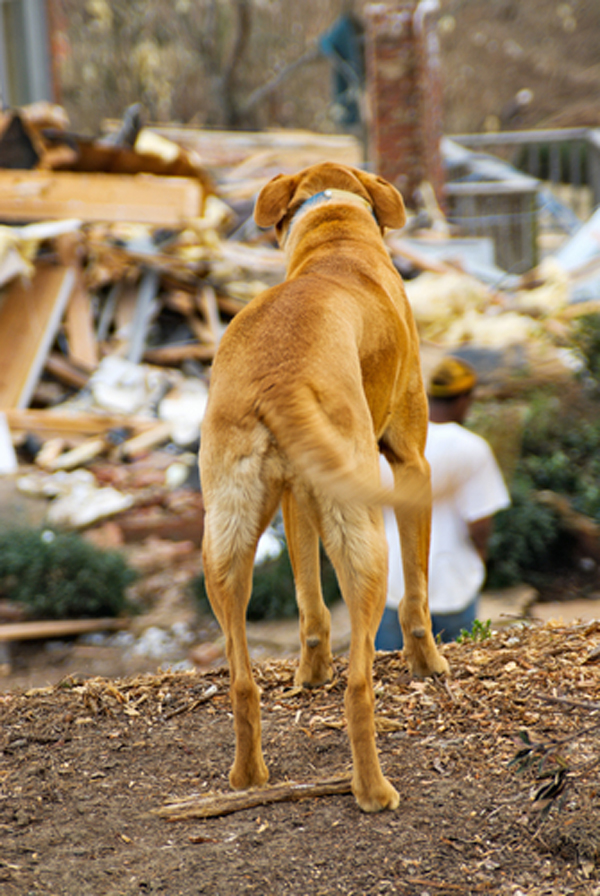 Southwestern Oklahoma State University used to allow pets until several bad scenes happened with dozens of panicked, barking, lunging dogs. The dogs “were kind of terrified from the storm and also strange people,” Rick Bolar, chief of the campus police, told the AP.

But officials are hesitant to ban pets, aware that many will simply ride the storm out with their pets outside. That’s what Suzanne Brown did last May, when her Pomeranian was turned away from City Hall in Tuttle, OK. She had already snuck her cat in. Brown decided to weather the storm outside, huddling with and protecting her dog.

“My dog is like my child,” she told the AP. “I know some people don’t understand that.” 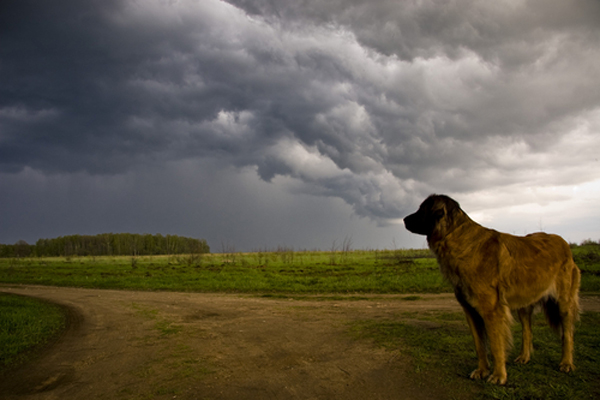 Even the the National Weather Service is getting involved in the debate, recommending that local emergency managers get out the word on how to shelter pets during severe weather, according to the AP. Trouble is, nobody is really sure what to do. Banning pets is doomed to fail, as people will invariable choose to ride the storm out in their cars outside of shelters.

“People are so attached to their pets, I don’t think it’s even possible to ban them,” said Byron Boshell, director of Security at Oklahoma City’s Integris Baptist Medical Center, which houses people during storms.

Obviously, the best thing to do in your own area is to call around and find out your public shelter’s policy on pets, and to make sure your dog is crate-trained.

Now it’s your turn: What would you do if you got all the way to a shelter, only to realize it banned pets? Would you leave your dog alone in your car? Or would you join him there and hope for the best? Have you ever been faced with a decision like that? Let us know in the comments.