Next on The Scoop: Guinness World Records Names a New World’s Smallest Dog

A story in the Guardian depicts a rampant black market for dog meat in Southeast Asia.

Editor’s note: This story contains harsh facts about the growing dog-meat trade in Vietnam and Thailand. We believe it’s important for our readers to know about such things. Just the same, be warned that some shocking things are in this post.

We know that people around the world eat dog, but little prepared us for a recent article about the practice in Vietnam. Apparently, the demand for dog meat has skyrocketed in the country, and a “brutal” black market run by an international organized crime ring has sprung up around it, according to the Guardian. Hundreds of thousands of dogs are stolen from people in Thailand and smuggled into Vietnam, destined for sale in streets stalls as well as Hanoi’s best restaurants.

At Quan Thit Cho Chieu Hoa, for example, one of the city’s most famous restaurants, “there’s dog stew, served warm in a soup of blood, barbecued dog with lemongrass and ginger; steamed dog with shrimp-paste sauce; dog entrails sliced thin like sausage; and skewered dog, marinated in chilli and coriander.” 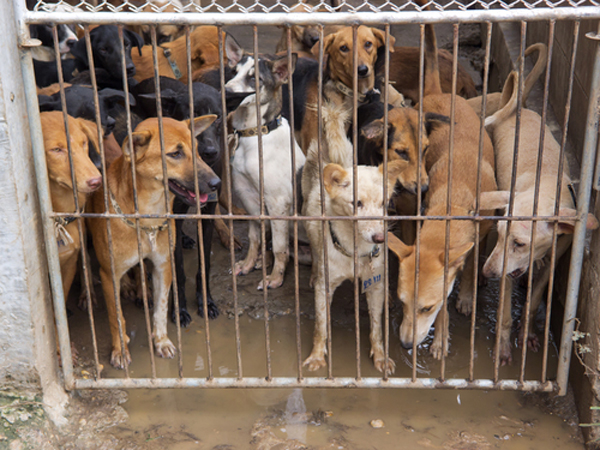 Along Tam Trinh, a stretch of road south of the city, there are roadside stalls selling roasted dog with lines 10 people deep. In Hanoi, the dog restaurants group together, “with signs bearing a dog’s head, or a roasted dog’s torso hanging from a large metal hook,” according to the story. Dog is the hot dish in the country — the “go-to dish” for drinking parties, family reunions and special occasions. People believe it increases virility, warms the blood, and provides medicinal cures.

Even worse: Many believe the more an animal suffers before it dies, the better the meat tastes. The dogs are usually killed by being hit with a heavy metal pipe, multiple times. Or they’re stabbed in the chest, their throats are cut, or they’re burned alive.

They’re also force fed: “I’ve got footage of dogs being force-fed when they get to Vietnam, a bit like foie gras,” says John Dalley, who heads the Thailand-based Soi Dog Foundation, which works to stop the dog meat trade in Southeast Asia. “They shove a tube into their stomach and pump solid rice and water in them to increase their weight for sale.” 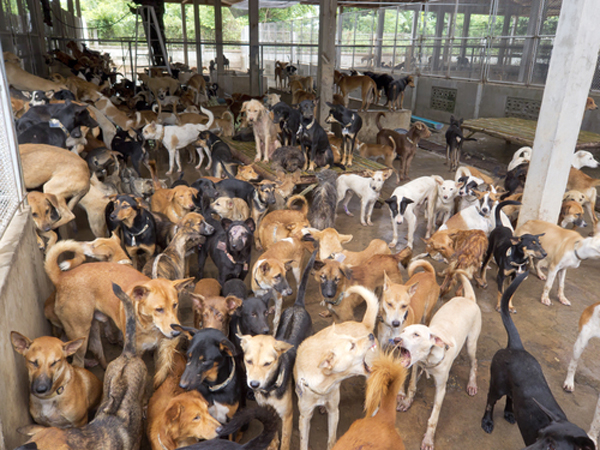 The Guardian talked to a customer at the restaurant Quan Thit Cho Chieu Hoa:

“I know it seems weird for me to eat here when I have my own dogs at home, and would never consider eating them,” says Duc Cuong, a 29-year-old doctor, as he wraps a sliver of entrails in a basil leaf and takes a bite. “But I don’t mind eating other people’s dogs. Dog tastes good, and it’s good for you.”

Another person holding a bag of 12 dogs’ paws touts the medicinal angle.

“My wife just gave birth but she’s having trouble lactating,” he says. “There’s an old recipe that calls for boiling the paws in a soup; we’ll use that to help get her going again.” 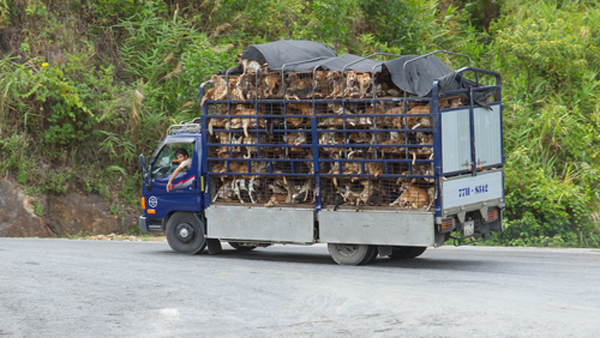 The article states that the practice is so prevalent that at least one Thai official, Bhumiphat Phacharasap, has said that his country should regulate dog meat to stave off corruption and ensure that the animals are fit to eat.

“We could treat dogs the same way we treat cows and pigs, by ensuring they were free of disease, had been vaccinated and had export licences, and hadn’t been tortured or harmed in transportation,” he says. “In Vietnam, they farm dogs just like they farm pigs and cows. I could accept that: You do it right, you eat it right.”

Are you ready for the farming of dogs?