Next on The Scoop: 3 Steps to Understanding Clean Eating for Dogs
Adoption 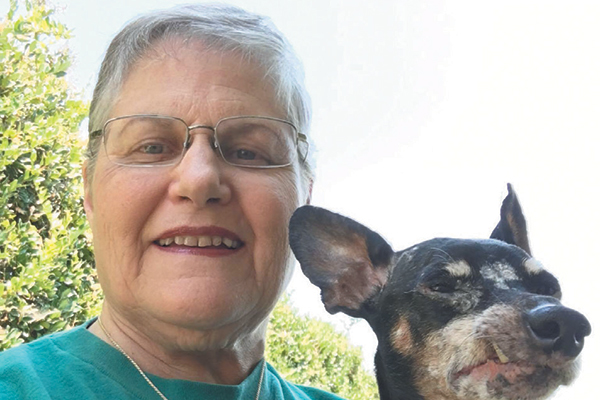 What Inspired One Woman to Adopt an ‘Unadoptable’ Senior Dog

November is Adopt a Senior Pet Month. This is the story of how Melani adopted Jake, a senior dog with terminal cancer who had been in a shelter for months.

Life for Melani Andrews, 72, from Galt, California, hasn’t been easy these past few years. In January 2016, her husband, James, died after a two-month struggle with the effects of strokes and other related issues. A little more than a year later, in February 2017, she lost her beloved rescue dog, Lola. In the summer of 2017, Melani learned she suffers from congestive heart failure. With two grown kids living their own lives, Melani wasn’t alone, but she was lonesome.

Her granddaughters, ages 13 and 16, pointed that out to her one night during a sleepover.

“Grandma, you’re too lonely,” they said to Melani. “You need someone to keep you company.”

She already moved to Galt to be near her daughter, but Melani realized her granddaughters had a point. She could use someone else in the house. And what better way to stem the loneliness than rescue another soul who could use some love and companionship? Perhaps the oldest, least-adoptable dog in the shelter, the one absolutely no one wants?

The story of Jake, a 12-year-old dog with terminal cancer 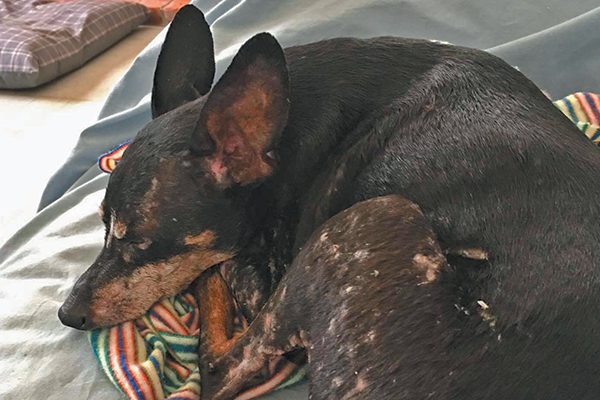 Enter Jake. This 12-year-old Manchester Terrier mix wandered the streets of Northern California before landing at the Front Street Animal Shelter in Sacramento in June 2017. And he was a hot mess.

“He was sorta motley looking,” Melani says with a laugh.

Jake needed to have 10 teeth pulled due to severe dental issues, and that was the least of his problems. He had extensive skin issues as well as terminal lymphoma cancer. And he was deaf. And the skin conditions made him look mangy and ill. Throughout the months he stayed at the shelter, no one at all looked at him once much less twice.

“That’s a whole lot of time watching people go by,” Melani says. It didn’t look good for Jake. He was old, not too pretty and dying. But he was perfect for Melani.

“I marched right in [to the shelter] and said ‘You’re going to think I’m nuts, but I want the dog that has been here the longest and [labeled totally] unadoptable,” she says.

Melani on adopting a senior dog

Melani didn’t care about medical issues or looks, or even how long the dog might live. Once her granddaughters planted the seed in her mind, it blossomed. Melani knew she wanted to love someone who really needed it. She recalled seeing media reports about the need to get older dogs adopted and what joys they are to their new owners regardless of their prognosis.

“We all have to go, but I would like to make his going more pleasant,” she says. “Older dogs still have love to give. Older dogs are fun to be around, and they are very appreciative. They will be as devoted as younger dogs. The least you can do is give everything back to them. Every day we have, it’s to the better. I figure, do something good with your life.”

And that Melani did. Even though the shelter staff was a bit puzzled at her request, they were thrilled when Melani saw Jake and said “He looks pretty good. I’ll take him.” Just like that.
Once in the car, Jake put his head in Melani’s outstretched hand. “All the way home, that’s how he stayed,” she says. “He followed me around [that first day] like a second skin.”

How Melani and Jake help each other 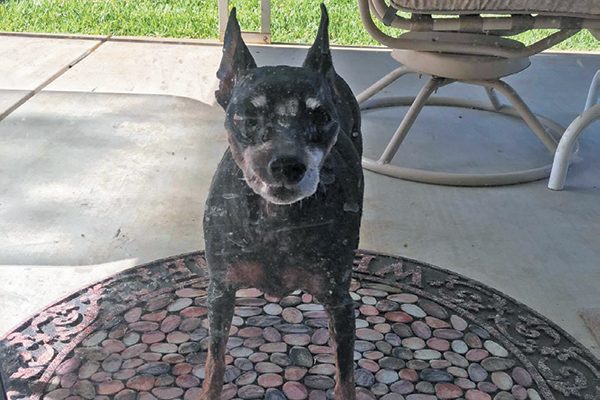 Melani investigated other medical options for Jake, but it turns out his cancer does not respond to chemotherapy or other conventional treatments. Yet that didn’t deter her. She made sure that even if Jake had six weeks or six years left, he was going to be comfortable.

She crafted up a nutritious menu plan for him, worked with veterinarians to ease and soothe his skin and began exercising both his body and mind through walks and obedience training. His personality unfolded more and more each day. Next on the list? Teaching Jake to ring a bell when he needs to go outside. He acts just like a normal dog, even demanding his food at certain times each day.

“I’m enjoying having him, and I think he’s enjoying me, too,” Melani says. “I’m not thinking about my health, and he’s not thinking of his health anymore either.”

Melani hopes her story inspires others to not overlook the “unadoptable” dog in the shelter. Because, as Jake is showing the world, sometimes all it takes is a bit of love to turn what looks like a hopeless case into a success story. For everyone.

Kyra Kirkwood is a Southern California-based writer, author (Move Over, Rover!) and journalist. She lives with her husband, two kids, one rescue dog and three reptiles. Follow her on Twitter at @IAmTheWriteMom.