Next on The Scoop: Alícia Rius’ ‘A Dog’s Life’ Takes a Closer Look at Canine Living 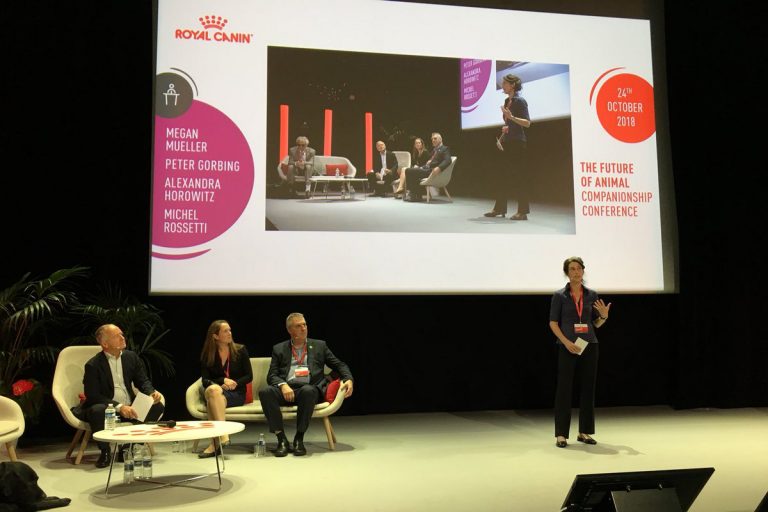 Dug Up at Dogster: Looking at ‘What Do Dogs Think?’ and the Future of Animal Companionship

Royal Canin held The Future of Animal Companionship Conference in October. At the conference, the company brought in experts from all over, including Dr. Alexandra Horowitz, a psychologist who studies and seeks to answer questions, like, “What is it like to be a dog?” and “What do dogs think?”

What is it like to be a dog? What do dogs think? These are burning questions for dog lovers. Dogster got an opportunity to ask psychologist Dr. Alexandra Horowitz — a speaker at Royal Canin’s Future of Animal Companionship Conference — these very questions.

The Future of Animal Companionship Most dog lovers are familiar with the Royal Canin brand of dog food. If not, you will likely come across Royal Canin at some point, as the company makes — alongside its regular cat and dog food — a line of therapeutic veterinary diets that support a wide range of health issues. As your dog encounters health issues, your vet may recommend one of these diets. My dog Tampa Bay is on the Hepatic canine diet as we speak.

Royal Canin just turned 50 years old and, to celebrate, it held The Future of Animal Companionship Conference in October where the company brought in experts from all over. Topics included everything from the Economics of Mutuality to Adapting Urban Environments to Pets’ Needs to Obesity: A Threat for People and Pets to Opportunities. Obesity — a big concern with Dogster readers — was one of the main topics at the conference. The conference was quite fascinating, and I was lucky enough to view a video of some of the talks.

The Dog Brain: What It’s Like to Be a Dog

Dr. Alexandra Horowitz, author of the books Inside a Dog and Being a Dog speaks at Royal Canin’s The Future of Animal Companionship Conference.

I was really excited about the lineup because one of the expert speakers was Dr. Alexandra Horowitz. Dr Horowitz is a psychologist whose interest in understanding the mind of dogs and answering the question, “What do dogs think?” has resulted in New York Times best-selling books, like Inside of a Dog and Being a Dog. She writes, teaches and researches what it’s like to be a dog. Dr. Horowitz also teaches at Barnard College and Columbia University, plus heads up the Horowitz Dog Cognition Lab. So, it’s no surprise that Royal Canin asked her to speak at the conference about her work and what it’s like to be a dog. She and Dr. Sarah Heath (author of Feline Behavioral Health and Welfare) spoke about the dog and cat’s point of view on the world, us and each other, plus they were part of the panel discussing the benefits of living with pets.

I got the chance to follow up with Dr. Horowitz and ask her more about how to answer the question, “What do dogs think?” and what it’s like to be a dog. Plus, I asked her some of our Dogster readers’ burning questions.

What do dogs think: Do dogs feel guilt?

Dr. Alexandra Horowitz explains how a dog thinks at The Future of Animal Companionship conference.

DOGSTER: As you mentioned at the conference, dog lovers often try to make sense of behavioral issues by using a human’s point of view rather than viewing it through the dog’s. For example, we believe dogs hold a grudge and then revenge pee or chew, and we tend to believe dogs feel guilt. Could you briefly explain how we go wrong in our thinking. particularly with those two issues, and what do dogs think, really? They are hot topics for our readers.

Dr. Horowitz: It’s natural to try to interpret dogs’ behavior as though they are little people … but doing so can lead us astray. One place this pops up is in our attributions of specific emotional experiences to dogs. Based on how they look when we think they’ve done something “wrong” (i.e., gotten into the garbage; eaten all the cat food; etc.), we assume they feel guilt, for instance. The “guilty look” — ears flattened, head turned to the side, tail wagging low between the legs — is different for each dog but is highly recognizable. Since we assume it means they feel guilty for what they’ve done, we also assume they both are conscious of what they’ve done, and they see it as wrong. This leads us to hold dogs to the same standards of behavior we hold for ourselves, in terms of following the “rules” of the house.

That said, I did run a study — that has since been replicated — which demonstrated dogs show this “guilty look” more not when they’ve done something wrong (in my study it was eating a treat they were forbidden to eat), but when the owner came in and thought they did something wrong. The guilty look is them appealing to you to not be punished; it’s not a reflection of their feeling of guilt. Whether they feel guilt is another question, but it’s certainly not evidenced by his look.

Similarly, people sometimes see dogs’ behavior, such as accidents in the house, as “getting us back,” say, for being gone a long time. There’s no evidence that dogs hold grudges. Their “misbehavior” is usually just the result of their being left alone for a long time with nothing to do (and, sometimes no way to relieve themselves).

What is it like to be a dog: Are some dog breeds smarter than others?

DOGSTER: Another hot topic to our readers is if there is such a thing as smart dog breeds and not-so-bright dog breeds. What are your thoughts on that?

Dr. Horowitz: I don’t think it makes sense at all to make generalities about a breed being smart or not smart. Breeds, or more specifically types of dogs as originally developed, were bred for specific functions.

Sheepdogs are really great, or “smart,” at herding sheep. But that same dog’s behavior in a small apartment, with no outlet for his drive, may seem much less smart. They’re not equipped for a life as an inactive companion dog and therefore may seem to misbehave and not understand what they’re supposed to do.

Similarly, a dog never ranked on the top of the “smart” list, like a Labrador, is actually quite skilled at being a companion. I just wouldn’t count on a Lab to herd sheep.

What do dogs think: dogs wagging tails left vs. right

Dr. Alexandra Horowitz tells Dogster why dogs wag more to the left when they see an unknown dog, one of the things she spoke about at Royal Canin’s The Future of Animal Companionship Conference.

DOGSTER: You said at the conference that dogs wag asymmetrically and it helps us see into their brains. How can their asymmetrical tail wagging help us read their body language better?

Dr. Horowitz: Fascinating research has shown that if you slow down a video of a tail wag, you see that they wag more to the right when they see someone familiar, and more to the left when they see an unknown dog, for instance. This is presumably because different halves of their brains are more active when recognizing a loved family member than in the apprehension involved in meeting someone unknown. The tail wag asymmetry is hard to see with the naked eye, but my interest in it, for people who live with dogs, is to realize that not all body language is so straightforward as it may seem.

What do dogs think: anthropomorphizing your dog

DOGSTER: What do you believe is the biggest thing dog owners can do to think more like a dog rather than anthropomorphize?

Dr. Horowitz: Look at your dog as if it were an alien creature. What if you had to figure out what it was doing without already knowing everything about it? Sometimes it helps to get another perspective on your dog – watch them being walked by someone else; take videos of your dog when you’re not home; or record your dog and watch it slowly, frame-by-frame, to see what you’re missing.

What is it like to be a dog: a dog’s sense of smell

DOGSTER: You stated that to understand a dog, you need to understand that they are an olfactory creature. What do you mean by that?

Dr. Horowitz: Dogs are smell-based animals, and we are not. We assume they are experiencing the world just like we are, but since we are mostly defining “what is happening” with visual information, we are probably not experiencing the same scene as dogs, who are smelling it.

DOGSTER: You said pulling a dog away from smelling a scent causes hiccups in the human-dog bond and welfare. Can you explain how?

Dr. Horowitz: Given dogs’ olfactory sensitivity, they are designed to smell. Since people do not value collecting smells as we go on our walks (indeed, we might actively avoid smelling, if in an urban setting), we de-value their smelling activity. Imagine having someone yank your head away from the window every time you turned to look outside, or at what is going on down the street, or at the new person coming in the room. Over time, that can be frustrating, and is limiting of dogs’ welfare.

Dog studies on what is it like to be a dog

DOGSTER: What are some recent studies you’ve done, and how can our readers find out more information about them?

Dr. Horowitz: We recently looked at the effect of participating in nosework (scent games) classes on the dog’s welfare. We found that starting even two weeks of practice five minutes a day led dogs to be more “optimistic.” This study is being considered for publication. Another, still in preparation, looks at levels of aggressiveness and anxiety after playing nosework games.

We also published a study showing that dogs recognize themselves by their scent — and know when it’s changed! Descriptions of all of our research are available at dogcognition.com.

Royal Canin and the Future of Animal Companionship

From all the comments, I could tell the conference was a great success. So I asked Royal Canin what its company’s leaders felt about this special day of fascinating talks by pet experts from around the world.

Loic Moutault, Royal Canin President said, “I can’t think of a better way to celebrate the milestone of Royal Canin’s 50 years than bringing together experts and thought leaders from around the world, all willing to discuss how we can better integrate pets into our society.

“At Royal Canin we take great responsibility in bringing perspective to pet ownership, both from the animal and the human point of view. I was extremely proud [that] Royal Canin could facilitate an event that explored a wide range of topics impacting human-animal interaction — from urbanization, scarcity of resources and global societal trends that affect pets’ health to the value new technologies bring to our world.

“Leveraging the science, sharing the knowledge and understanding the future trends and opportunities is a collective effort that demands we all work together.

“At Royal Canin, we are committed to put the needs of cats and dogs first. We believe pets make the world a better place for humans. Let’s build a better world for pets and create a bright future for animal companionship.”

Read more about what dogs think on Dogster.com:

5 comments on “Dug Up at Dogster: Looking at ‘What Do Dogs Think?’ and the Future of Animal Companionship”