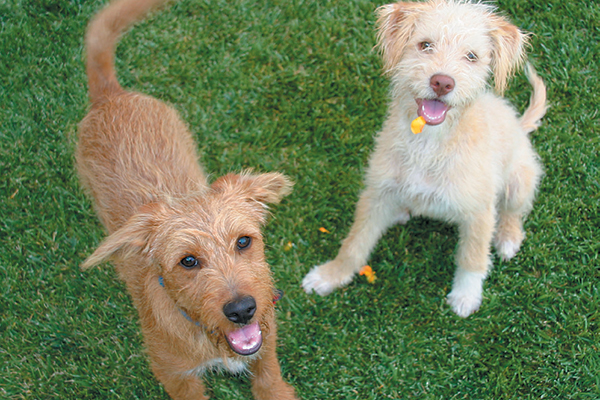 5 Things to Consider When Introducing a New Dog

Thinking about introducing a new dog into your family? Here are some things to consider before adding a second dog (or third … or fourth …) to your household.

As I was watching Mokie and Cuba wrestle like wild savages in the living room this morning, I thought, as I often do, how thankful I am that they enjoy each other so much. I love living with two dogs who are great friends and share in adventures, riotous games of tug, the occasional end of a pint of gelato. I suspect my household will always be a two-dog household. While getting a second dog can be a great decision for a family, it is not a decision you should take lightly. Here are some considerations when it comes to introducing a new dog:

1. Two dogs are three times as much work as one dog Often, owners are under the very mistaken impression that two dogs are easier than one dog, and that introducing a new dog will somehow mean that they both train and exercise one another, alleviating the owner of both of those responsibilities. Nothing could be further from the truth. Each dog will need individual training and exercise (particularly if either one lacks leash manners) before they can be trained together. For example, if you have two dogs, you will have three training processes — training each dog separately, then training both dogs together. If you had one dog, you only go through the process once.

Also, your dogs should get special, individual time with you. Mokie will be going to ClickerExpo with me in Connecticut in a couple of weeks, so I’ll need to schedule some special “Cuba and mom time” adventures for when I return.

2. Dogs don’t always teach each other the right things

I always tell my clients to be fairly certain they are happy with the behavior of the resident dog(s) before introducing a new dog. If you are working through training challenges with your dog, introducing a new dog with her own needs can leave you feeling overwhelmed.

While I have seen a second dog learn recall more easily when working with an experienced recalling dog, for the most part, dogs don’t teach each other things people like, such as sit, down, eye contact, or drop the dead chicken carcass. I have, however, seen dogs learn obnoxious behaviors (like inappropriate barking, cat chasing and counter surfing) from their canine companions.

3. Introducing a new dog of the opposite sex might be best Male/female might be the best combination when it comes to two-dog households. Photography ©chris-mueller | Getty Images.

Generally, I like male/female pairings in a two-dog household, then male/male pairings, with female/female pairings at the bottom of the list. That is not to say you can’t see successful duos with all of these combos, but I think most behavior consultants would agree that the worst cases of interdog aggression are usually between bitches, and when these dogs live in the same home, managing the situation can be a nightmare for the owners — and is tough on the dogs, too. Generally, a second dog of the opposite sex is a good idea for most families.

4. Consider your current dog’s likes and dislikes before introducing a new dog

Occasionally, I see clients who are hell-bent on introducing a new dog to the home and, unfortunately, the first dog does not enjoy the company of other dogs at all. Whenever possible, I try to talk these folks out of signing themselves up for a decade (or better) of trying desperately to cram square pegs into round holes — or the other, more common result, where one dog finds herself homeless. Sometimes I am successful, sometimes not.

But if you want to get a second dog, take your dog’s preferences into consideration. Ask yourself, “What kinds of dogs does my dog like?” and, just as important, “What kind of dogs doesn’t my dog like?” Sit down and list out these characteristics, and take notes when your dog meets new dogs so you can begin tracking patterns. While you may be attracted to the look of a Chihuahua, your Mastiff may prefer the company of other big dogs.

If you have a senior dog who may be arthritic or have other pain issues, a young puppy or unruly adolescent can significantly effect your dog’s quality of life during his golden years. Being jumped on or constantly solicited for play may be painful and stressful for your older dog, who might just prefer to relax alone — or in the company of another low-key dog.

How you introduce a second dog to your resident dog is of the utmost importance. Photography © cynoclub | Getty Images.

Introducing a new dog to your resident dog correctly is very important. Some breeders and rescue organizations have staff experienced in canine social interactions and body language, who can help make the introduction as low-stress as possible. If this is not an option, you may want to consider scouting out a local trainer to facilitate the introductions.

Some final thoughts on introducing a new dog to your family

Two dogs may be three times the work of one, but they can also be 100 times the fun. Few things make me as happy as watching my dogs really enjoy playing. If your dog enjoys the company of other dogs, the thought and planning you put into introducing a new dog to your family will pay off in the joy!

Tell us: Have you ever introduced a second dog into your household? Tell us how it went in the comments!

This piece was originally published in 2015.