Next on The Scoop: Our French Bulldogs Put the Stair Barrier to the Test
Dogster Exclusive

With 116 performance titles over the years in agility, rally, and obedience, this friendly Frenchie surprised a lot of people.

When I say Soren the agility star, odds are you’re picturing a Border Collie, Australian Shepherd, or perhaps Toy Poodle. But this story has more than a few twists, weaves, and turns: Soren is actually a French Bulldog.

The breed may be short, heavy boned, and not classically agile, but Soren reminds us not to underestimate Frenchies. They are happy-go-lucky, ready to interact, and thrive on attention. Frenchies like Soren may just supplement their performance with ad lib frolics.

Now let’s learn more about Soren, who wasn’t simply a Frenchie who tried his paw at agility — he helped debunk myths about Frenchies and performance sports.

According to Stevenson, Soren, who passed away a few months ago just shy of 12 years old, was more than an amazing agility dog. Like most Frenchies, he was incredibly loving and showed a great sense of humor.

“At one championship event, Soren was in his glory, running the course and soaking in the cheers,” Stevenson says. After his runs, the pair were in the hotel lobby, which had plush, purple carpeting. “With people and press all around us, Soren flopped over on his back in a classic Frenchie pose on the soft carpet and fell right asleep (snoring included) in the middle of the commotion.”

Soren rarely made mistakes in agility, but when he did, Stevenson says you could almost hear him thinking, “Well, I messed up, so I might as well have some fun.”

On one particular run, the tire was only on the course once, but Soren took it a few extra times.

“He was obviously very happy with himself, and having done as he pleased, much to everyone’s amusement, he ran back across the ring to finish the course with me,” Stevenson says.

Along with entertaining his audiences, Soren inspired them.

“I’ve had owners of breeds not known for success in performance sports tell me that Soren inspired them to participate in dog sports such as obedience, rally, or agility,” Stevenson says.

Soren also had a special bond with each child he met, and his legacy of loving little ones inspired Sorenson to write a children’s book.

“An illustrator and I are working on a book about Soren’s agility journey, inspiring children to soar, just like Soren did, despite perceived limitations,” Stevenson says.

After all, few people expect a Frenchie to succeed in agility, but Soren soared into the sport with unabashed enthusiasm.

“Soren’s legacy may encourage kids who aren’t the tallest, fastest, or strongest, or who face physical or emotional challenges, to believe in themselves,” Stevenson says. “I think the secret to Soren’s success was simple: He did what he did because it never occurred to him that he couldn’t.” 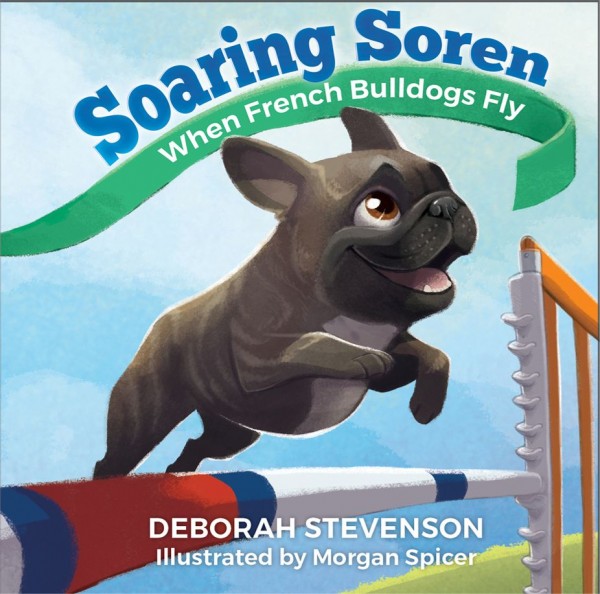 Soren enjoyed life after he retired from agility, but he didn’t retire his passion.

“He would come running in from the yard, skid across the tile floor, careen off the cabinets, and run down the hall like he had someplace important to be,” Stevenson says. “He lived large with great joy, ever eager for a surprise or a new adventure.”