Next on The Scoop: Another Defeat for Puppy Mills: Judge Upholds Phoenix Anti-Breeder Law
Breed Profiles 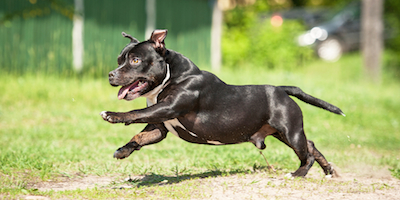 Get to Know the Staffordshire Bull Terrier: The Dog With an Identity Crisis

Some people think the Staffordshire Bull Terrier is the same as a Pit Bull, but he's really not.

Killer or baby sitter? Pit Bull or nanny dog? The Staffordshire Bull Terrier is a dog with an identity crisis. The truth is, he’s legally considered a Pit Bull by many governments, and as such is banned in some places. But he was also such a valued babysitter that he is still known as the Nanny Dog. What’s up?