Next on The Scoop: The Real Victim of Tara the Hero Cat’s Story Is the Dog

Is There a Link Between Knee Surgery and Cancer in Dogs?

A veterinary journal looks at development of cancer in dogs who've had a procedure called TPLO; is there a relation, or is it coincidence?

In early April I wrote an article discussing cruciate ligament injuries in dogs. In the article I mentioned that there are a number of different treatment options for injury to the cruciate ligament, but that one treatment in particular was gradually gaining a consensus as the best option: TPLO.

To recap: The cruciate ligament is a structure in the knee that helps provide stability to the joint. It is a strong band of tissue in the knee that runs from the end of the femur (the largest bone in the upper portion of the leg) to the tibia (the largest bone in the lower portion of the leg). It can break suddenly (if, for instance, a dog jumps for a Frisbee and lands in just the wrong way) or it can gradually deteriorate over time until it weakens completely and ruptures.

Either way, when the cruciate ligament ruptures the knee becomes unstable. The two main bones of the leg slide around in the joint, leading to significant pain and arthritis later in life.

Treatment recommendations have varied significantly over time. In recent years, however, most vets have recommended surgery to try to stabilize the knee. There are two broad types of surgeries that have been used. In one category are surgical techniques that attempt to reconstruct the ligament or to tighten the structures around the joint in order to physically replace the ruptured ligament.

The second type of surgery does not attempt to replace the ligament. Instead, it involves cutting the proximal (top) portion of the tibia (which, as you’ll remember, is the large bone that forms part of the knee at its lower aspect). The cut portion is then rotated by several degrees and reaffixed using a bone plate. When at the new angle, the two bones no longer slide around — instead, they remain stable relative to one another even without the help of the torn ligament. This is the tibeal plateau leveling osteotomy, or TPLO.

The TPLO was highly controversial at first. Its inventor, Dr. Barclay Slocum, shook up the veterinary community and was, for a period of time, persona non grata among academic types. When I was in vet school in the late 1990s, several of my professors had disparaging things to say about him, based largely upon Slocum’s perceived possessive nature regarding the surgery. Slocum had patented the bone plate used to reaffix the portions of the tibia after it was cut. He also treated the surgery as a proprietary procedure — in other words, it was only possible to learn the surgery from Slocum, and his students were required to sign contracts that forbid them from teaching it to others.

But gradually it became clear that the TPLO worked more effectively in most cases. And after Slocum passed away, a significant amount of clinical research was performed on the surgery. Over time it became the dominant method for treating cruciate ligament injuries.

Whether it will remain so, however, is at this time undetermined. It seems that the controversy surrounding the TPLO simply won’t go away. 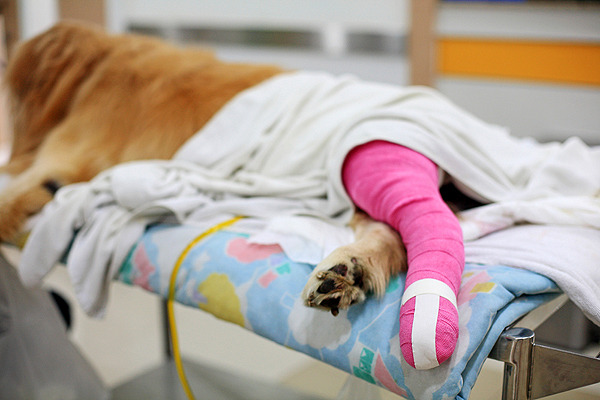 One month to the day after Dogster published my cruciate ligament article, the Journal of the American Veterinary Medical Association published a paper that caught my eye. It was entitled, “Osteosarcoma following tibial plateau leveling osteotomy in dogs: 29 cases (1997-2011).”

Osteosarcoma is a common form of bone cancer in dogs. Make no mistake: Osteosarcoma is a very bad thing. It causes significant pain, and it metastasizes (spreads) with regularity. In the paper, a number of dogs that had undergone TPLOs were later evaluated for swelling in the area of the surgery and then diagnosed with osteosarcoma. Median survival time with amputation and chemotherapy was 313 days.

Could the plates have been involved in the development of the cancers? At this time nobody knows. The development of cancer is highly complex and frankly remains poorly understood; however, foreign material in the body has been linked to cancers in the past.

However, it should be remembered that breeds of dogs such as Labrador Retrievers, Rottweilers, and Boxers who are predisposed to cruciate ligament injury also happen to be those in which osteosarcoma is most frequently diagnosed. Furthermore, the part of the tibia that is the focus of the TPLO also happens to be one of the most common places for osteosarcoma to develop even in the absence of bone plates.

In other words, the correlation could be nothing more than coincidence. As always, more research is needed.

Meanwhile, know that the best option for dogs is not to suffer from cruciate ligament injury in the first place. Although some factors such as breed are beyond an owner’s control, remember that overweight dogs are predisposed to cruciate injuries. Dogs who are spayed or neutered before puberty are also predisposed to cruciate ligament injury, but there are many other medical factors that must come into play when deciding when and whether to have your pet “fixed.”

If your dog has a TPLO plate in his knee, do not despair. It is a common surgery, and the overwhelming majority of dogs with TPLO plates have not developed cancer. Furthermore, at this time there is not substantive evidence of a causal link between TPLO and cancer. However, you should monitor your dog’s knee carefully. If symptoms of osteosarcoma such as swelling, sensitivity, or limping develop, then the matter should be investigated immediately. Osteosarcoma, like most cancers, carries a better prognosis when diagnosed early.