Next on The Scoop: How Daisy, an Underdog with an Underbite, Made a Difference

Get to Know the Rhodesian Ridgeback: King of Beasts

As the hair on his spine suggests, the Ridgeback is a dog who's a true nonconformist.

This big red dog known as the Rhodesian Ridgeback may be known for his obstinate cowlick of hair, but he’s much more than that. He’s one of the most versatile dogs around. He can hunt, guard, pull, and love with the best of them. He’s macho enough to appeal to those wanting a tough-guy pal, while also puppyish enough for those wanting a silly companion. He’s loving, brave and smart — but he can be just as obstinate as that ridge. 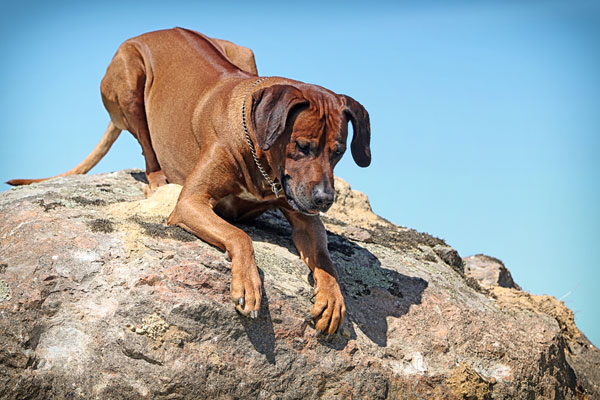 Some Ridgebacks do not have ridges. The ridge is controlled by the presence of a single dominant gene. It causes a line of hair to grow backward along the top of the back; where it culminates above the withers, a circular whorl, or crown, adjoins either side of the ridge.

In the 16th and 17th centuries, Boer settlers arriving in South Africa brought with them Mastiffs, Great Danes, Greyhounds, and other breeds that then interbred with native dogs of the Khoikhoi (formerly called Hottentot) people. These native dogs often had a ridge of hair growing the wrong way down their backs. 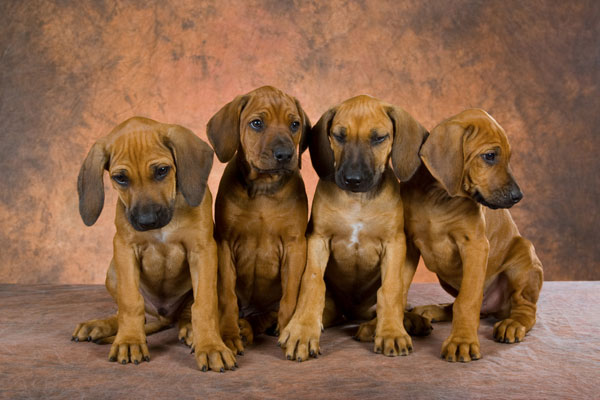 In 1875, Dr. David Livingston published one of the earliest engravings of a ridged dog in his memoirs, Missionary Travels in South Africa.

In 1875, a big game hunter from Rhodesia borrowed two of the dogs to try them at hunting lions. The dogs were so good at holding the lions at bay he spent the next 35 years basing a breed on them. The dogs never killed lions, which would be impossible for even the largest dogs. Their job was to run the lion down and harass it, preventing it from bolting until the hunter could arrive to dispatch it.

First called “lion dogs,” the name was changed to Rhodesian Ridgeback in the 1920s.

The breed standard was based on that of the Dalmatian, and if you look beyond color and size they do resemble each other. Both were bred to be versatile all-around dogs.

The Ridgeback is a member of the American Kennel Club Hound group, and it is included as a sighthound for purposes of participation in lure-coursing competitions. However, it is a difficult breed to classify, as it has traits and abilities of sighthounds, scenthounds and even mastiffs. For its first 20 years of recognition in Rhodesia, it was classified as a gundog along with pointers and other bird hunters because it depended on the hunter to shoot the quarry rather than bringing it down like hounds. It is now recognized as a Hound by all major kennel clubs, with some, such as the AKC, calling it a sighthound while others, such as the FCI (the major international kennel body) call it a scenthound. 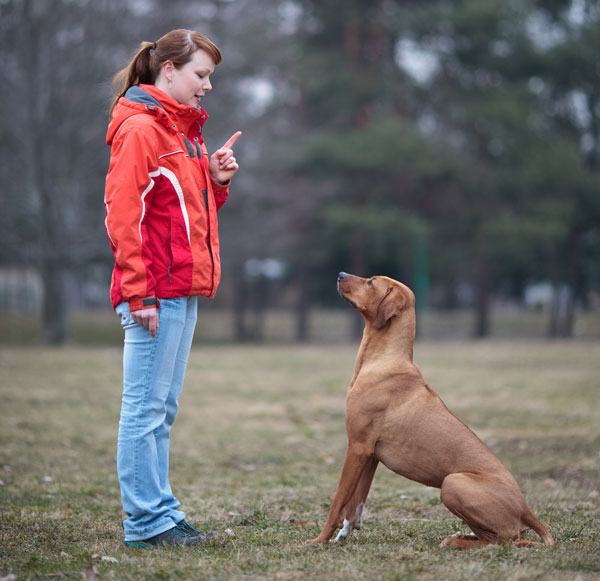 Only one Ridgeback has ever won the Hound group at the Westminster dog show, and none has won Best in Show.

Famous owners include Olympic gold-medalist Carl Lewis and quarterback Tim Tebow (who changed his dog’s name from Bronco to Bronx when he changed teams from the Denver Broncos to the New York Jets).

Do you own a Rhodesian Ridgeback? Have you spent time with one? Let’s hear what you think about this fascinating breed in the comments! And if you have a favorite breed you’d like us to write about, let us know that, too!

5 comments on “Get to Know the Rhodesian Ridgeback: King of Beasts”