Next on The Scoop: Dog-Mom Shaming Is Real, and It’s Ridiculous
Dogs in Art

So far, the artist has drawn Cinderella and Snow White with service dogs, with the hope of raising awareness and money for his own helper.

I love Disney almost as much as I love dogs. When I saw art combining some of my favorite Disney princesses with a powerful message about the wondrous abilities of service dogs, I was smitten! This new series from digital artist Arien Smith — a self-identified mental health advocate, coach, writer and activist — is raising awareness about the various ways service dogs can support handlers with disabilities. It’s also a creative way for Smith, who suffers from PTSD, to raise money to get his own four-legged helper.

The “Royal Service Dogs” series depicts classic Disney princesses as living with disabilities that are mitigated by their service dogs. Smith sees his art as “both a critique on the lack of disabled characters and advocacy for disability rights.”

So far he’s drawn two princesses, but Smith plans for the series to continue.

“Since Disney princesses have been often critiqued for their diversity, or lack of, they were my first focus with this project. In the future, I plan on expanding this to other characters.”

The first princess in the series is Cinderella, who lives with fibromyalgia and is shown having her service pup help by removing her glass slipper. 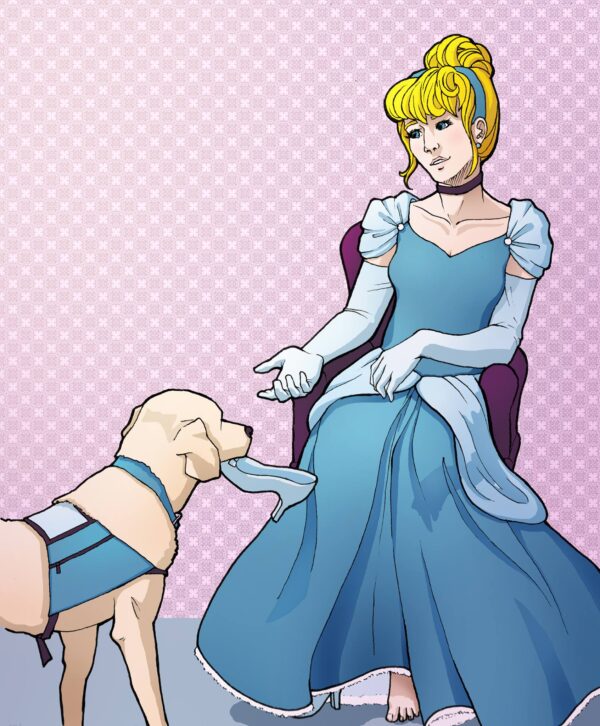 “Cinderella lives with fibromyalgia in this picture, which is an invisible condition but can be disabling for many people,” Smith says. (Image courtesy Arien Smith)

In the second installation, we see princess Snow White and her service dog, who alerts her to allergens in her food.

“Things like peanuts, gluten, dairy and many other things are common allergens that service dogs help their handlers with. Like any service dog, they can be any breed, and some dogs with ‘smushed’ noses are still fantastic allergen-alert dogs. That’s why I chose to draw Snow White with a Pug,” Smith explains in his description of the drawing. 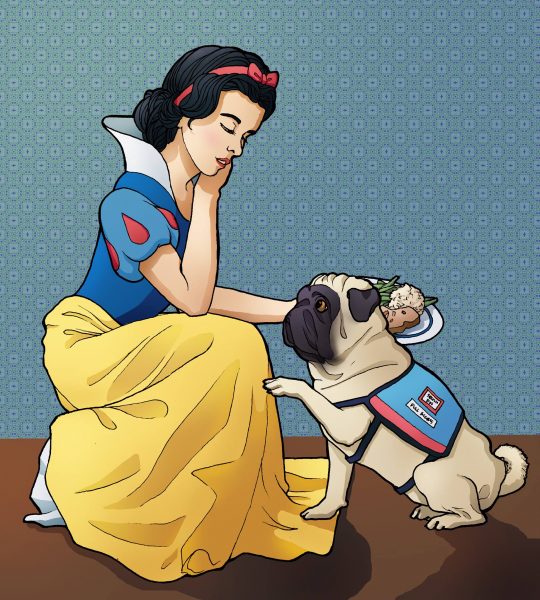 Snow White’s disability also ties back to the fairy tale, in which an apple causes her quite the problem. (Image courtesy Arien Smith)

Smith shares his creations on his Facebook and YouCaring pages, the latter where appreciators of his art can make a donation to help him purchase and train his own service dog. These specially bred and trained animals are very expensive, often costing tens of thousands of dollars. Smith is trying to raise $2,500 to cover purchasing a prospect from a Goldendoodle breeder and paying private trainers to prepare the dog. In an update to his fundraising page this week, Smith was excited to share that he has raised enough to send a deposit to the breeder.

“Having a service dog means I can live a more independent, confident and expansive life. A service dog is freedom for me,” he explains Smith on the page.