Next on The Scoop: Why Tiring Your Dog Out With Exercise Before Training Is a Mistake
Dogs and Science

Are Pigs Smarter Than Dogs?

The study of animal cognition, including pig intelligence, is still a new field. Which animal does science say is smarter, the dog or the pig?

In 1651’s Leviathan, the political philosopher Thomas Hobbes stated that “to make covenant with brute beasts is impossible; because not understanding our speech, they understand not, nor accept of any translation of right … and without mutual acceptation, there is no covenant.” To most people of Hobbes’ time, the function and treatment of animals was rooted primarily in their utility: Pigs were raised for food; dogs were raised to herd, hunt, and guard. Their “brute” nature meant that whether dogs or pigs were smarter was irrelevant.

Since we’re no longer tenant farmers, and a majority of us know little of the conditions under which our food is produced, we’re much more likely to engage with both pigs and dogs as domestic pets rather than as critical cogs in our household economy. Advancements in science since the 17th century have proven that many of the “lesser” creatures that we interact with, whether as pets or food, understand more than Thomas Hobbes could ever have known. 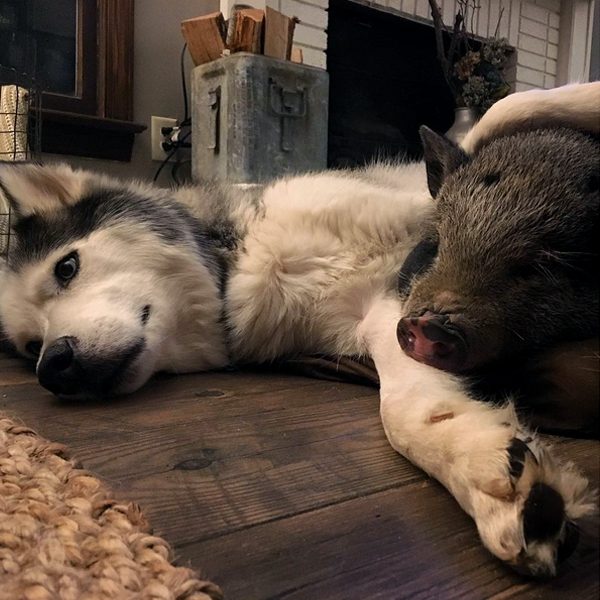 Pet pigs and dogs can be friends! (Photo by Kelsey Dawson on Instagram)

Let’s look into what we’ve learned about the relative intelligence of pigs and dogs, including:

Pigs as pets are quite different from dogs. They tend to do as they please, and, though affectionate and personable beasts, their trust must be fostered and developed. In Thomas Hobbes’ time, most domesticated animals served well-defined functions, either for their labor or their roles in the food chain. That people lived in such close and regular contact with all animals was one reason he found it necessary to declare that they could not be reasoned or bargained with.

As we’ve moved away from real connection with and knowledge of “how the sausage is made,” though, people have embraced the idea of pigs — and stranger animals yet — not as food-in-waiting, but as cherished and beloved members of the household. The fad for adopting Vietnamese potbellied pigs regularly made national news about 20 years ago. Since then, having pigs has become more mundane and far less unusual. 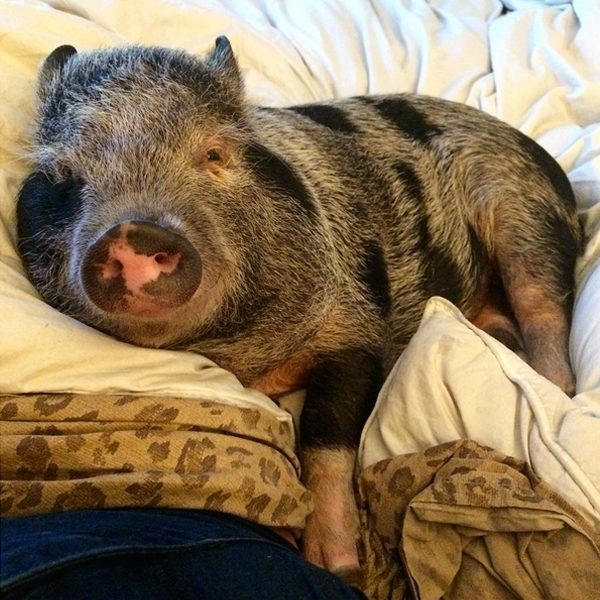 Like dogs, pigs are opportunistic omnivores, who are particularly motivated by food and treats. Also like dogs, an ignored or bored pig can become stressed, depressed, and destructive inside the home. Unlike dogs, who have a range of life expectancies based on breed and size, pigs tend to be especially hearty and long-lived. Properly cared for, pet pigs can routinely live up to 20 years.

What may surprise readers unfamiliar with porcine pets is that pigs are receptive and responsive to consistent and positive training. Yes, pigs can be trained; indeed, in 2015, a pig named Amy made headlines in the Pacific Northwest for excelling in an obedience program designed for dogs! Unlike dogs, who can be capricious or unpredictable around strange people and animals, pigs are generally sweet-tempered. Socially, they are highly adaptable to both multi-pet households and are curious and approachable when meeting strangers.

Trainability is one thing, but are pigs intelligent? Like any animal, humans included, intelligence is a relative concept. An environment that fosters continuous learning, tasks that suit inherent skill sets, and opportunities to utilize these are important facets of how smart a given creature can be. Even fanciful and fictitious brilliant beasts, like the pig Wilbur in E.B. White’s Charlotte’s Web (1952), the eponymous mouse in Daniel Keyes’ Flowers for Algernon (1959), or the rats in Robert O’Brien’s Mrs. Frisby and the Rats of NIMH (1971), were notable not only for their intelligence, but for the effort put into exceeding their natural capabilities.

Pigs are similar to dogs in having particular native strengths in olfactory and emotional intelligence. A pig’s eyes are weaker than a dog’s, making their sense of scent almost a superpower. Each animal is adept in altering the world around them physically with their muzzles. Where “puppy dog eyes” may melt our hearts, pigs can actually be emotionally manipulative of their owners. 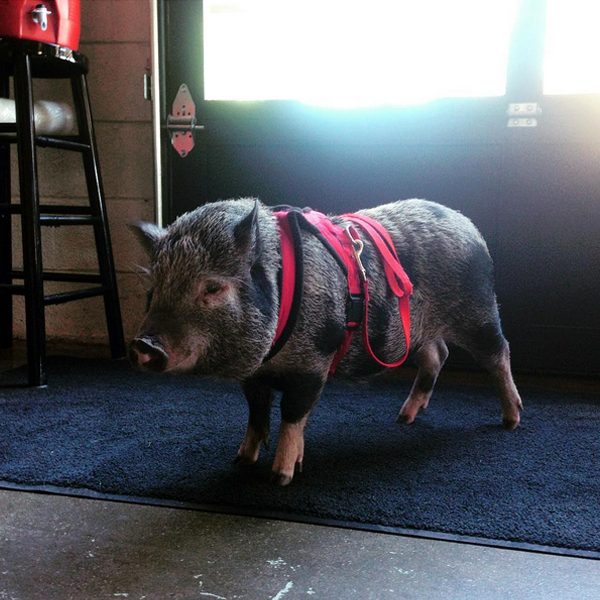 Pigs can be trained to walk on a leash! (Photo by Melvin Peña on Instagram)

Pigs and dogs are both sensitive to pleasure and pain, and both experience tangible benefits in terms of health and well-being from regular social interaction. For their own part, pigs can be house- and behavior-trained, and enjoy daily exercise even when leashed or harnessed. Like dogs and chickens, pigs are physically tough, and have proven to be highly adaptable to a wide range of climates and homes, whether urban apartments or urban farms.

Are pigs smarter than dogs?

There are numerous similarities between pigs and dogs, and both species have long since proven to be loving and affectionate pets. Since we insist on making inter-species comparisons and maintaining hierarchies, the question of whether pigs or dogs are smarter is a perennial point of fascination. Given those propensities, it’s surprising that pig intelligence and capacity for learning and retention has only been a distinct field of scholarly and scientific study since the late 1990s, with the founding of a dedicated lab at Purdue University in Indiana.

The evidence has been mixed; some studies state that pigs are clearly smarter than dogs, while others conclude that as far as intelligence goes, the differences are negligible. There is no question, however, that pigs are intelligent, communicative, curious, and even creative. They are emotionally complex and have functional long-term memories. What we are learning about pigs’ intellectual lives and capacities is really quite astonishing.

No agendas here, only food for thought

Many articles and essays published over the last several years have stoked controversy about what pig intelligence means, or whether our knowledge of pigs should change our relationship to them. Contentious debates rage over whether studying pig intelligence is driven by political or social agendas meant to persuade people to stop eating meat entirely. We have no such agendas here, only observations based on available data. 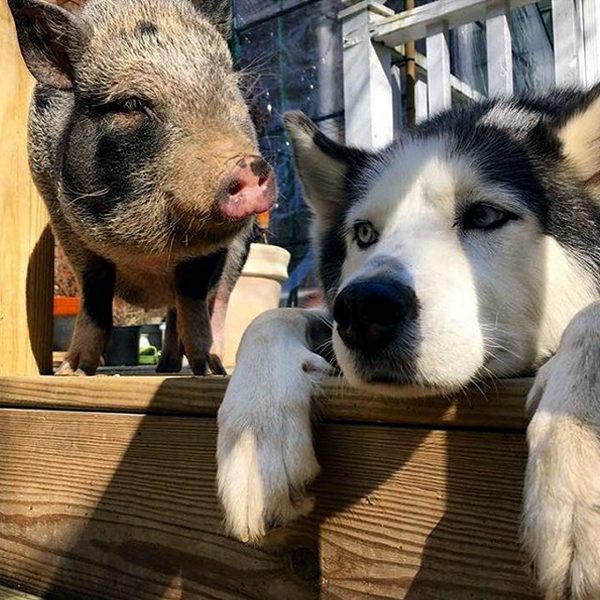 Advocates for better treatment of pigs and other farm animals go into graphic detail about the living conditions of pigs in large-scale, factory-farm situations. There have even been so-called “ag-gag” laws passed, including one in my own home state of North Carolina, that forbid people from investigating, reporting, or documenting the ways that animals are bred, raised, kept, or slaughtered.

One major point of comparison, and one I have not seen mentioned with any frequency, is our ongoing outrage over the horrors of puppy mills. As noted above, prior to the advent of mechanized, large-scale industrial farming — in the time, say, of Thomas Hobbes, with whom we began — most regular people were intimately familiar with the life cycle of animals raised for food, from birth to slaughter.

Regardless how we rank pigs and dogs in terms of intelligence, it’s at least worth thinking about why stories of puppy mills are so much more likely to spur cries of abuse and mistreatment than those of giant, federally subsidized farms. I’m not in the business of telling anyone what to do, what to eat, or how to act. The purpose here is only to present an additional perspective, and to provide some food for thought.