Next on The Scoop: At First Glance, You’ll Think These Needle-Felted Dogs Are Real
Breeds

Did you know that the Shih Tzu breed is a cross between the Pekingese and Lhasa Apso? It is! Here are nine more interesting facts about these adorable dogs.

Editor’s note: Have you seen the Dogster print magazine in stores? Or in the waiting room of your vet’s office? This article appeared in our April-May issue. Subscribe to Dogster and get the bimonthly magazine delivered to your home.

The elegant and affectionate Shih Tzu has won admirers around the world, whether he’s flowing along the red carpet of Hollywood, the green carpet of Westminster (the world-famous dog show at Madison Square Garden) or the bedroom carpet of his devoted owner. Here are 10 fun facts about this exotic, long-haired beauty.

Theories abound about the origins of the breed. Many historians believe the Shih Tzu was the product of a mating between a Pekingese and a Lhasa Apso, a Tibetan dog presented by the Dalai Lama to Chinese emperors around the end of the 17th century. The dogs were so treasured by the Chinese royals that no Shih Tzu was sold, traded or given away. It wasn’t until 1930 that the breed made its way into England and Norway. The breed spread throughout Europe and was introduced to this country after World War II by returning members of the U.S. military. The American Kennel Club recognized the Shih Tzu in 1969.

The breed name, not to be confused with a form of massage (“shiatsu”), is pronounced “Shee Tzoo.” The name comes from the Chinese for “lion” because the dog was bred to resemble the lion as it appears in traditional oriental art. (The Pekingese is also called the “lion dog” in Chinese.) Renowned dog fancier Lady Brownrigg, who imported the first Shih Tzu into England, came up with the nickname “Chrysanthemum Dog” which, when you look at the Shih Tzu’s face and flowing topknot, is easy to understand. 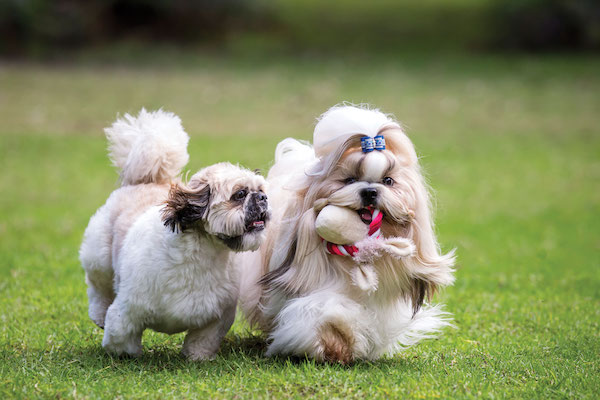 And by the way, whether you are referring to a pack of pampered pups or a single coiffed canine, it’s still Shih Tzu.

4. Don’t fall for the nonsense

The AKC breed standard is generous when it comes to size, preferring an ideal height at the shoulder of 9 to 10.5 inches, but not less than 8 inches nor more than 11 inches. The ideal weight of a mature Shih Tzu is from 9 to 16 pounds. There is no preference for dogs at either end of the size scale, so don’t be fooled by those who tout the rarity and desirability of an “imperial” or “teacup” Shih Tzu. There’s no such thing.

Throughout its colorful history, the Shih Tzu has had one purpose in life: to be loved and cherished as a companion and house pet. The breed standard describes its temperament with adjectives like outgoing, happy, affectionate, friendly and trusting. However, like the other Asian breeds, he has a stubborn streak, so begin socializing and training the Shih Tzu at a young age. Owners dote on this breed and readily forgive their mischief, but having a confident Shih Tzu that loves one and all will enhance the pleasure of living with one. 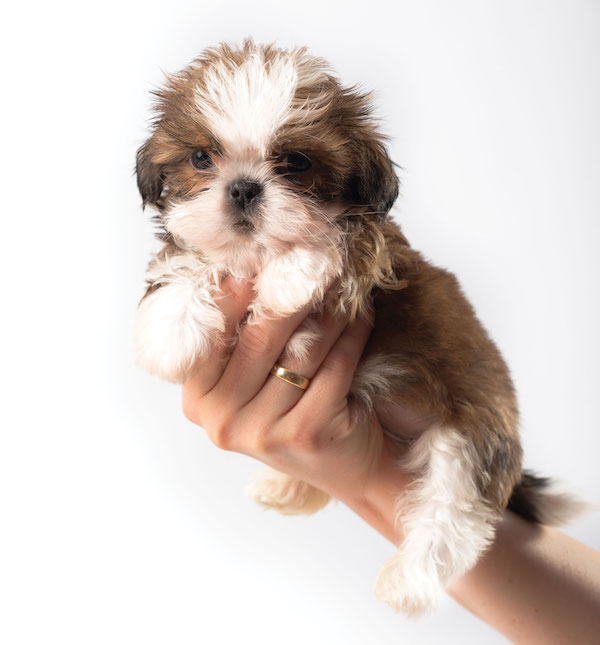 Every Shih Tzu lover has fallen captive to the breed’s luxurious, long and flowing double coat. It’s the hallmark of the breed, along with the signature topknot that ties up the dog’s head coat and accentuates it most fashionably with a pretty silk bow. Realistically, maintaining the floor-length coat of a show dog is a huge job, requiring time each day to nurture the hair, keep it in product and protective wraps and ensure that it remains clean. Creating the topknot is a skill in itself. While pet owners ooh and aah over the lavish coats they see on champion Shih Tzu at dog shows, most are happy to keep their pets in short, easy-to-maintain puppy cuts.

7. A rainbow of colors

Many breeds sport only one color, but admirers of the Shih Tzu can indulge their fancy with a rainbow of glamorous shades and combinations. Solid colors range from the darkest black, charcoal gray and red
to the palest gold, silver and cream. Parti- colored (or two-toned) dogs — white with black, gold or silver — are particularly popular and very striking. Shih Tzu even come in stripes, called brindles, in both parti-color and solid.

Although classified as a Toy breed, the Shih Tzu demonstrates his sturdy nature with flowing, effortless movement and lots of drive. With his high head and tail carriage, he is every bit the proud little aristocrat. The brisk speed and energy are particularly evident on a fully coated Shih Tzu, as the silky hair floats along.

For all the Shih Tzu’s stubbornness, this is a busy little dog who wants to be with you wherever you are. If you would prefer not having canine company in the bathroom, at breakfast, while watching TV or working at the computer, a more independent breed might be a better fit.

10. Shih Tzu of the rich and famous

Are Plant-Based Diets Good for Dogs?