Next on The Scoop: 9 Irish Dog Breeds to Celebrate St. Patrick’s Day
Behavior 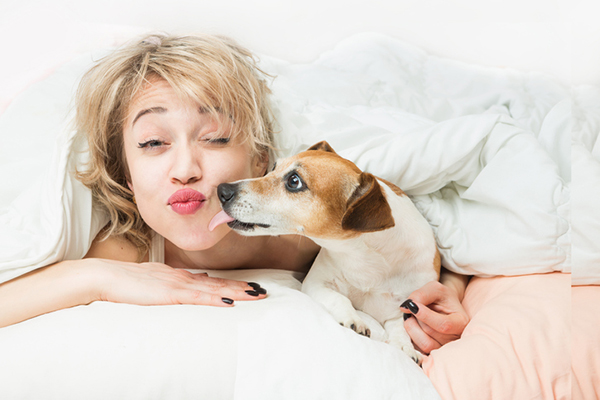 What Are the Signs Your Dog Loves You?

What Are the Signs Your Dog Loves You? The Basics

What are the signs your dog loves you? Photography © avemario | Thinkstock.

The good news is that according to experts, even though your four-legged friend may not be able to verbalize the words “I love you,” there are lots of signs your dog loves you.

“Dogs are social creatures by nature, and fortunately, the communication between dogs and human is very good — they can read our body language, and we can read theirs,” says Scott R. Sheaffer, a certified canine behavior consultant and owner of USA Dog Behavior, LLC in Texas. “There are lots of ways that dogs tell us they love us, and some are more obvious than others.”

Let’s break out some of the signs your dog loves you.

1. One Sign Your Dog Loves You? He Stays Close to You … Very Close

According to Dr. Gail Clark, a canine behavioral psychologist and owner of K9 Shrink, LLC in Colorado, a dog that’s sitting on your lap, leaning on you, nudging you — or won’t even take his eyes off you — is sending a very clear message that they love you. “Staying close to their owners is a major sign in dog language,” she explains. “If your dog is doing everything they can to be physically close to you, his definitely expressing his feelings for you.”

Scott adds that dogs have two major categories of behavior: distance increasing and distance decreasing. When a dog is feeling affectionate and non-threatened by his human, he will move closer and thus decrease his distance … but if an animal is increasing his distance from you, it’s sending the opposite message.

“Sometimes people say that if a dog comes over and leans on you, they’re trying to show dominance in some way … but in reality, it’s just another distance-decreasing behavior to tell you that they love and trust you,” he adds. The same concept applies when your dog comes over and plops himself on your feet while you’re sitting on the sofa, or lies next to you while you’re in bed watching television. “You probably don’t need to be an animal behaviorist to know that a dog that wants to be close to you all the time has strong feelings of affection towards you,” he adds.

However, Scott warns that if your dog wants to be with you all day, every day — and shows symptoms of fear or anxiety whenever you leave the house — that’s not necessarily a sign of love, but an indicator that your dog may suffer from separation anxiety. “People tend to find it flattering when their dog falls apart when they leave, but it’s really not a healthy behavior … it’s a serious fear and anxiety about being left alone, and at that point you should seek professional help,” he advises.

2. Another Sign Your Dog Loves You? He Follows You Around

Most pet owners quickly realize that as soon as you bring your new four-legged family member home, you’re not going to be able to do anything alone ever again — including use the bathroom. Yes, a dog that follows you everywhere is another one of the signs your dog loves you.

“Even when your dog isn’t necessarily touching you, he’s showing you how much he loves you by following you around,” Scott says. “A dog who loves you feels the need to keep you in his line of vision … so when he joins you in the bathroom, it’s not your dog being rude or invading your privacy — he just doesn’t know you’re not really supposed to follow someone in there.”

3. One Sign Your Dog Loves You? He Jumps on You

It’s probably not the most desirable behavior — and most pet owners will train their dogs not to do it — but a dog jumping on you is another sign your dog loves you.

“The fact of the matter is that anything a dog does to get closer to you is a clear sign of their affection,” Dr. Clark explains. “Some of these behaviors, like jumping, can be annoying sometimes … but if your dog wants that physical contact with you, they’re really just trying to express how they feel.”

4. Yet Another Sign Your Dog Loves You? He Turns His Back to You

Ever had your dog greet you by sticking his or her butt in your face? While it may not be an appropriate greeting amongst humans, in dog language, it’s actually a sign your dog loves you!

“If a dog is uncomfortable with you, he would never turn his back to you — would you turn your back to someone you were afraid of or thought could put you in danger?” Scott says. “A dog coming over and pushing his butt into you is actually a very friendly and affectionate behavior.”

5. Did You Know About This Sign Your Dog Loves You? He Stretches Toward You

Here’s one sign your dog loves you that the average pet owner may not know: if you’ve ever seen your dog stretch in front of you (it’ll resemble a play bow, but both of their front legs are together), it may not be because they’re just waking up from a restful snooze. Scott explains that dogs will often make this motion — a “greeting stretch” — in the direction of someone that they love and are happy to see.

“When this behavior is done in close proximity to you, and the dog is clearly pointing at you, it’s actually your dog’s way of saying ‘I love you, it’s great to be here with you right now,” he says.

7 comments on “What Are the Signs Your Dog Loves You?”