Next on The Scoop: The Grinch: The Story About the Spirit of Christmas 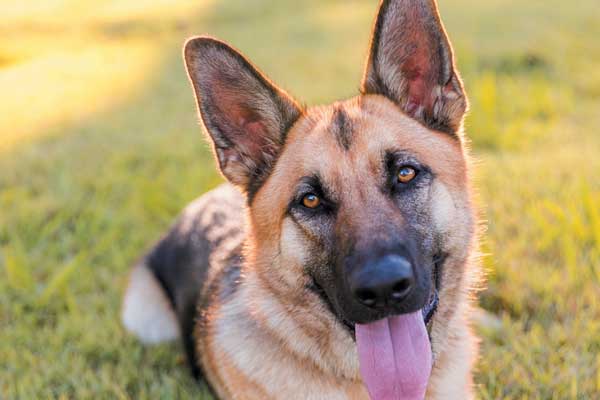 Getting to Know and Love the German Shepherd Dog (GSD)

Did you know that no other breed has had as many canine stars as the GSD? Find out the history of the German Shepherd Dog — and what makes this breed so unique.

Alert, fearless, self-confident: Perhaps no breed is more instantly recognizable than the German Shepherd Dog. His heroic feats and high intelligence have earned him universal respect. The GSD will tackle any job with an incredible work ethic. Here are eight facts about this noble breed. Rin Tin Tin was one of the most popular GSD movie stars in history. Photography bum | Alamy Stock Photo.

Max Emil Friedrich von Stephanitz was born in 1864 and became known as the father of the German Shepherd Dog. From around the late 1880s to ’90s, Captain von Stephanitz began to standardize the breed. A medium-sized, yellow-and-gray wolflike dog had caught his eye at a dog show in western Germany. The dog was agile and powerful, possessing endurance and intelligence.

He was an able sheepherder who excelled at his job without training. The dog, Hektor Linksrhein, was bought by Captain von Stephanitz, renamed Horand von Grafrath and became the first registered German Shepherd Dog. The Captain established a breed parent club in Germany, became the first president and, in short order, established a type and look in the breed. His motto was “Utility and intelligence.”

For the Captain, beauty meant little if the dog lacked intelligence, temperament and anatomical efficiency. News traveled swiftly around the world and in 1907, the first GSD was exhibited in the United States. The German Shepherd Dog Club of America was established in 1913 with 26 charter members.

The courage that Captain von Stephanitz felt was the hallmark of the breed was equally prized by the early fanciers who crafted the American breed standard.

It describes the breed as having “a distinct personality marked by direct and fearless, but not hostile, expression, self-confidence and a certain aloofness that does not lend itself to immediate and indiscriminate friendships. The dog must be approachable, quietly standing its ground and showing confidence and willingness to meet overtures without itself making them. It is poised, but when the occasion demands, eager and alert … Lack of confidence under any surroundings is not typical of good character.”

3. A worker for every season

Captain von Stephanitz was impressed by the breed’s ability as a natural sheepherder, requiring only direction, no training. The GSD can still perform admirably in this capacity but is versatile enough to excel in so many other areas. His achievements as a service and war dog are legion.

The breed makes an excellent guide dog for the blind, police dog and search-and-rescue dog. As a guard dog and companion, he is unmatched. Whatever the task, the GSD rises to the occasion.

4. World politics in the breed

After World War I, anything associated with the name “German” fell out of favor, and people did everything possible to disassociate themselves with the name and the country. Many countries and kennel clubs changed the name of the breed to distance themselves from the negative feelings that a reference to Germany would harbor.

In England, Ireland and many other European countries the name of the GSD was changed to “Alsatian” (from the Alsace-Lorraine region). England has since returned to the name GSD although some nations still cling to Alsatian. This breed is known for shedding, so frequent brushing is recommended. Photography ©Charlotte Reeves Photography.

The AKC breed standard calls for a double coat of medium length, as dense as possible, the hair straight, harsh and lying close to the body. Although long-coated GSDs are seen, the breed standard considers long coats a fault, along with soft, silky, woolly or curly coats. The breed sheds heavily, so frequent brushing is recommended.

6. A coat of many colors

Although the breed comes in assorted colors, the standard specifies that strong, rich colors and patterns are preferred. Black-and-tan dogs are the most frequently seen, along with sables and solid blacks. Washed-out, dilute colors like blue and liver are serious faults. White Shepherds may compete in AKC obedience, agility and other performance events but are disqualified in the conformation show ring.

7. GSDs on the big screen

While we have our Lassies, Beethovens and Benjis to entertain us, no other breed has had as many canine stars on the big (and small) screen as the GSD. In addition to the timeless Rin Tin Tin (with his own star on the Hollywood Walk of Fame), the movies have been graced, over the decades, by the heroic exploits of Ace, Bullet, Jerry Lee, London, Ranger, Rusty, Sandow, Strongheart and Wolfheart.