Next on The Scoop: Raising a Dog in the Country 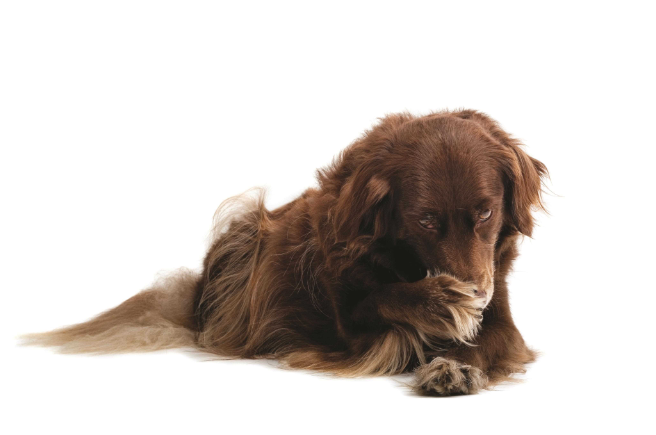 The Curious Case of the Nervous Tummy

You’re exactly right, like a goose! She stretches her neck waaaay out like this …” I was on my first telephone call of the day with the remarkable descriptive owner of Flora the Maltipoo, named after the Roman goddess of flowers and spring, naturally. Flora seemed to be suffering from chronic vomiting, although there seemed to be mild anxiety mixed in with potential neck pain. Despite the flowery description, I didn’t have the faintest clue what was going on.

“That’s right, every day she’s spitting up three to four times a day, maybe more. She gets so nervous and then, blammo! She cranes her neck like it hurts and little specks of bile seem to spray out of her mouth!”

Later that morning, I was petting Flora on my examination table and still couldn’t decipher her symptoms. For the past few months, Flora had been “spitting up” liquid bile primarily mid-morning and mid-afternoon. On a few occasions, Flora had awakened her owner in the middle of the night dry heaving in bed. Upon further questioning, I discovered Flora had recently become a little more “nervous around strangers,” and a neighbor had recently adopted a new puppy, causing Flora “considerable distress.” Flora seemed more “clingy” and was increasingly prone to “shaking at the slightest loud sound.” I was beginning to get a hunch of what may be going on.

A thorough physical and neurological exam was normal. In-clinic blood, urine and fecal tests were all normal. Flora’s owner agreed to allow me to take a couple of radiographs to make sure there weren’t any abnormalities in her throat or stomach. We also performed a simple oral dye study to look for narrowing of the esophagus, swallowing issues, or unusual anatomy or tumors. These basic tests are the foundation of any chronic vomiting diagnosis.

Fortunately, all of the tests were normal. Unfortunately, I didn’t have a definitive diagnosis yet. That’s how it is in medicine; sometimes the most important information is knowing what isn’t causing the symptoms. In Flora’s case, I’d eliminated the vast majority of serious, perhaps even life-threatening conditions in a single visit. To uncover her problem would now take a little experimentation.

My primary rule-out at this point was gastroesophageal-reflux disease or GERD, most likely caused or exacerbated by anxiety. While GERD is relatively uncommon, affecting less than 1% of dogs, it should be considered in cases of chronic vomiting or nausea. Many dogs with GERD or behavioral problems will extend their neck, shake, seek attention or solace from their owners, and many will dry heave or vomit. I was also concerned about GERD due to the fact that most of the episodes occurred several hours after eating. My plan was pretty simple: start Flora on a famotidine (Pepcid) trial, combined with breaking her meals into four to five smaller meals strategically placed throughout the day and a “midnight snack” just before bedtime. I also suggested some behavioral modification to help ease Flora’s anxiety around other dogs, strangers and noises.

✤ Two weeks later Flora was back and doing much better. She was still working on the behavioral modification, but had warmed up to the neighbor’s puppy, much to her owner’s delight. We decided to wean her off the famotidine and stick with the small, frequent meals. If Flora exhibited any signs of nausea or discomfort, I instructed her owner to give the famotidine immediately.

✤ One month later, Flora was almost back to normal. We’d made a few tweaks to her diet (I boosted the fiber content of the food her owner called the “between-meal snacks”) and started a more
regimented physical activity program (a 30-minute daily walk “rain or shine”), along with “puppy playtime” with the neighbor’s dog. She’d only needed the medication twice during the four weeks.

Flora’s case proves once again that sometimes the best test results are the ones that don’t diagnose a disease. Too often, we expect instant answers with little effort or cost, when sometimes we need to slow down, be more thorough, thoughtful and patient. With my patients, the first thing I do is ensure a dangerous disease isn’t present. Most of the time, a few simple diagnostic tests can rule out the really scary conditions and give us time to solve the pet’s problems. Many times, pet owners are reluctant to proceed with diagnostic tests and eager to start treatment. The risk with this approach is you may waste valuable time on the wrong treatment. Your veterinarian is happy to explain why certain tests are needed, and, if not, find a veterinary team that will.

Also, give as much information and detail as possible. Flora’s owner gave me all of the puzzle pieces I needed to assemble a diagnosis. If you feel your veterinary team isn’t taking the time to listen to you, tell them. In nearly 30 years of practice, I’ve learned my best “diagnostic test” is listening. The bedrock of medicine is the patient history — be as flowery as possible!

Dr. Ernie Ward is an internationally recognized veterinarian known for his innovations in general small-animal practice, long-term medication monitoring, special needs of senior dogs and cats, and pet obesity. He has authored three books and has been a frequent guest on numerous TV programs.

8 comments on “The Curious Case of the Nervous Tummy”